This sounds like a set up or just plain crazy

McAfee antivirus founder John McAfee is reportedly taking legal advice after a raid on his Belize home by police resulted in the software entrepreneur’s arrest and the death of his pet dog.

The raid in the early morning of 1 May by the country’s armed ‘Gang Suppression Unit’ (GSU) allegedly involved the doors to McAfee’s house being smashed down, his property ransacked, and his dog shot.

After searching the house for drugs and firearms and handcuffing him and his 12 employees, the police detained McAfee for a number of hours before releasing him at 2am the following morning.

The police haven’t given a reason for the raid but did reportedly find a cache of weapons including 12 gauge shotguns, handguns, rifles with scopes and ammunition. McAfee said he’d presented permits for all but one of the weapons which were for his company’s security.

“The entire day was an incredible nightmare. This is clearly a military dictatorship where people are allowed to go and harass citizens based on rumour alone and treat them as if they are guilty before any evidence whatsoever is obtained,” McAfee was reported as telling a local TV station after the raid.

McAfee blamed events on his refusal to donate money to “the local political boss” in his locality. No charges have been made.

“I have a fair amount of money and not much to do. So I spend it where I think it will do go. And I don’t ever invest in politics. I don’t donate to any political party; I don’t have any political affiliations,” he said.

Although independently wealthy thanks to his past involvement with the company that still bears his name, the entrepreneur claimed to be being hit badly by the financial fallout from the credit crunch of 2008.

In 2009, his New Mexico ranch was put up for sale to the highest bidder, a period during which he was also reported to have sold properties in Colorado and Hawaii.

He was the subject of a contentious Fast Company article in which it was suggested that he might be exaggerating his financial losses in order to avoid the fallout from a civil suit connected to the death of his nephew in a flying accident. McAfee moved to Belize in 2008.

Still remarkably well preserved for his 66 years, McAfee remains better known for his exploits in helping to form the antivirus industry in late 1980s.

His company, McAfee Associates, was one of a small handful of companies that pioneered protection for PCs against viruses - McAfee is particularly associated with researching the infamous ‘Brain’ virus of 1986 - a quaint threat by today’s standards.

In 1997 the McAfee name disappeared as the company was renamed Network Associates after a merger with Network General. Subsequently relaunched under its original McAfee brand in 2004, the company was finally bought by Intel in 2010 for $7.68 billion.

The authorities were just doing a routine scan of his house. No threats detected.

The authorities were just doing a routine scan of his house. No threats detected.

Bogman wrote:
The authorities were just doing a routine scan of his house. No threats detected.

There is a delicious irony here.
He didn’t pay up ffs.
Those raids are the equivalent annoying pop up ads on software - reminding him that he should pay to get rid of them.

Millionaire on the run: How the man who founded software giant McAfee lost his fortune and ended up hiding from police in Belize after they ‘rousted him from the bed of a 17-year-old and shot his dog because he’s running a meth lab’ -> dailymail.co.uk/news/article … h-lab.html

His story feels familiar somehow. It reads like one of the guys in this book
amazon.com/Emergency-This-Bo … 0060898771

The author met several wealthy types who liquidating all their US and taking residency/citizenship in various central american countries out of suspicion of US State and belief that inflation/terrorism/breakdown of law and order shock was coming.

His story feels familiar somehow. It reads like one of the guys in this book
amazon.com/Emergency-This-Bo … 0060898771

The author met several wealthy types who liquidating all their US and taking residency/citizenship in various central american countries out of suspicion of US State and belief that inflation/terrorism/breakdown of law and order shock was coming.

It’s a good book, just finished the Kindle version. Well worth a read if you like his style. Not as good as “The Game” though.

Update - just saw on twitter that John McAfee is dead…

McAfee, the founder of a antivirus software company, was arrested in October of last year and awaiting extradition when he was found dead, police sources told the newspaper El Pais.

Now business insider readers/subscribers hear all about this odd stuff called ‘Qanon’ and some other guy who died in prison, and other odd rumours… 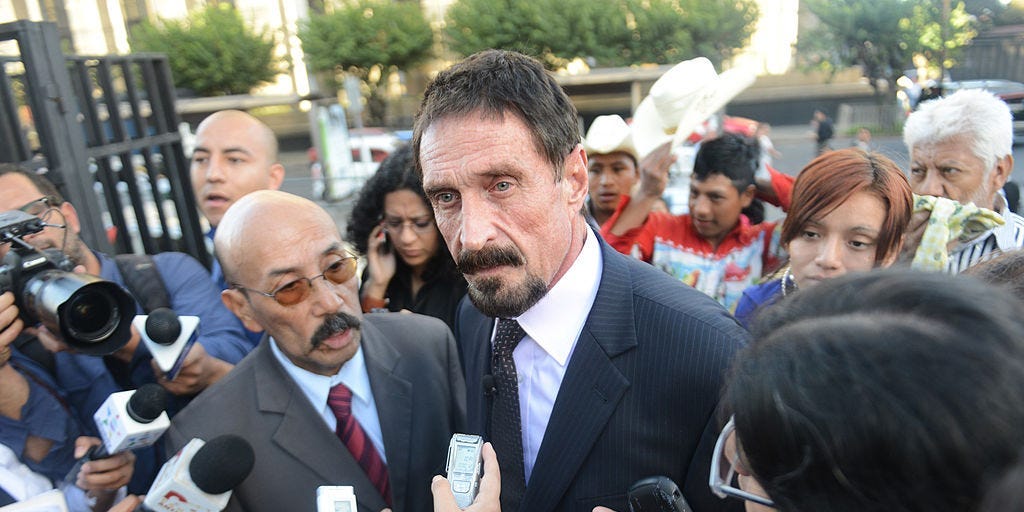 The antivirus software mogul's own social media accounts are joining in, with his Instagram account sharing an image of a "Q" after his death.

Oh could well be. But some chatter about his deadman’s switch being activated - through etherium? Never got into crypto/NFTs so

So yes maybe it’s faked & gets him a quiet life, with 31TB of data leaked via a deadman’s switch maybe it’s all a distraction from Arizona audits… who knows!!!

If the MSM are associating the MSM “QAnon” conspiracy theory there has to be a lot of panic right now and they can not ignore it but at least muddy the waters.

John McAfee’s wife Janice released a statement about his “suicide”.

There is a line of thinking he was after all a long time spook, and had perhaps been trying his best in recent years of the Turmp admin to flip. One of the many angles.

A forum post elsewhere speculated as to how many government computers run McAfee software.