The narcolepsy thing is a bit scary and no doubt a big reason many are going to take a wait and see approach. If there was a definitive test to whether you have natural immunity I think i’d definitely wait even if the natural immunity was only going to be short lived.
Unfortunately T or B cell testing, which i think needs to be done for this is still a long way off.
As a slightly overweight 49 year old asthmatic though I’ll be lining up to get the vaccine as soon as I can, assuming the vaccine comes before the definitive testing.

A notable from the “lockdown” pandemic video, was the mention of a US military study, qukc search for it brought up this result: 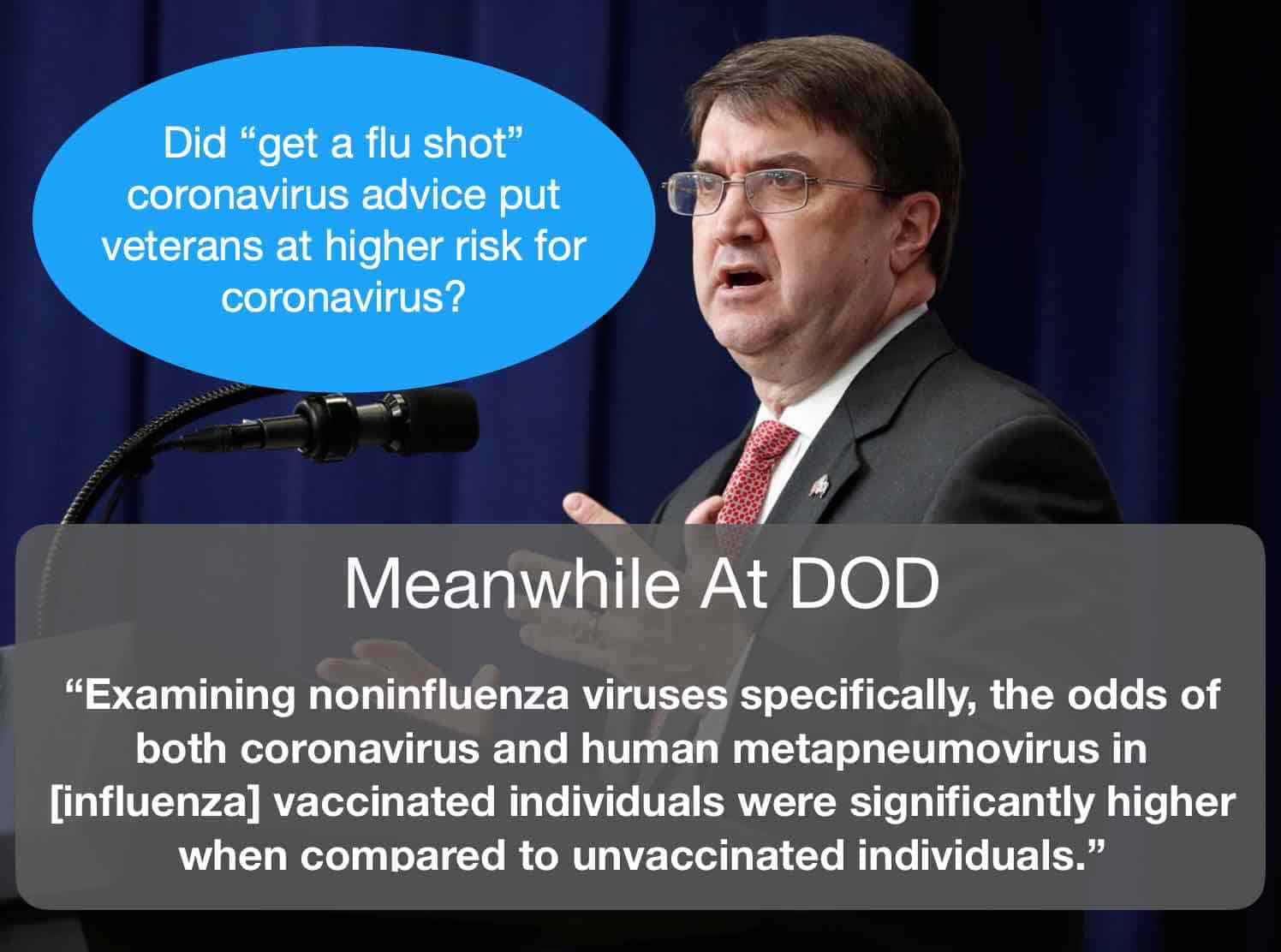 A recent military study shows military personnel evaluated who received the flu vaccine were at 36 percent increased risk for coronavirus with varied benefit in preventing some strains of the flu. …

Paraphrasing, the study highlights the value of the human body’s ability to fight against viruses. Apparently, by contracting influenza, the body naturally “may reduce the risk of non-influenza respiratory viruses…”

Due to the flu vaccine’s “interference” with the naturally occurring biological process, there may be an increased risk of contracting non-influenza viruses:

“While influenza vaccination offers protection against influenza, natural influenza infection may reduce the risk of non-influenza respiratory viruses by providing temporary, non-specific immunity against these viruses. On the other hand, recently published studies have described the phenomenon of vaccine-associated virus interference; that is, vaccinated individuals may be at increased risk for other respiratory viruses because they do not receive the non-specific immunity associated with natural infection.”

“The Morning show” Started filming in Oct 2018 and finished filming in May 2019. Listen to this closely, pay attention to what Reese Witherspoon says…don’t take your ear off the news story she’s reporting on.

They’re laughing at us. This shit’s been in the making for years. 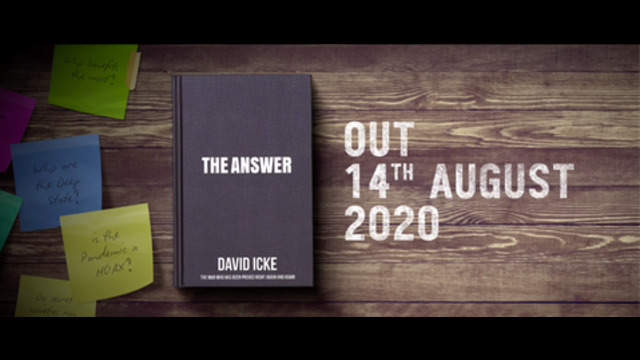 People are entitled to think there is an ‘agenda to destroy western society’: Alan Jones
23/07/2020|7min

Sky News host Alan Jones says with militant protests on the streets, freedom of speech being destroyed, and a virus “ripping the guts out of the economy,” people are entitled to think there is an agenda to destroy western society.

“You are not about to dive into a coffin if you test positive,” Mr Jones said.

It comes as five million Victorians remain under lockdown as the state grapples with a out -of-control-second wave of COVID-19, while the treasurer’s economic update on Thursday outlined a grim economic reality.

Victoria has recorded 403 new COVID-19 cases, along with five new deaths in the past 24 hours taking the state’s total active cases to more than 3,800.

“Is this a pandemic or an exercise in gross irresponsibility by the Victorian government,” Mr Jones said.

“With militant protests on the street, monuments and statues being knocked down, freedom of speech being destroyed, people terrified to speak out, unhinged snarling human pit bulls frightening the tripe out of people. And now a virus, ripping the guts out of the economy.

“You would be entitled to think there is an agenda out there comprehensively determined to destroy Western society as we know it.”

Load of bollocks, strictly for consumption by gullible morons, a.k.a. the people so totally lacking in critical faculties that they would give Icke the time of day.

Its a business model for that guy.

Is Paddy waking up?

More and more people beginning to see through this scam.

A min or so longer version/snippet:

Hard to believe that some of our more gullible forumites still can’t see the agenda behind this manufactured crisis.

From Lockdowns To "The Great Reset"

The lockdown in the wake of the coronavirus pandemic has accelerated the implementation of long-held plans to establish a so-called new world order...

This is a must read thread. China launched a massive social media campaign to get other countries to lockdown and destroy their economies. Presumably to close down foreign competitor companies to Chinese exports.

Here is the “must read” unrolled.

1/5 This @nytimes article by @paulmozur is a smoking gun on the genesis of the coronavirus lockdowns.

According to the article, the CCP launched a massive social media campaign in ITALY to advertise its coronavirus lockdown measures in early March. 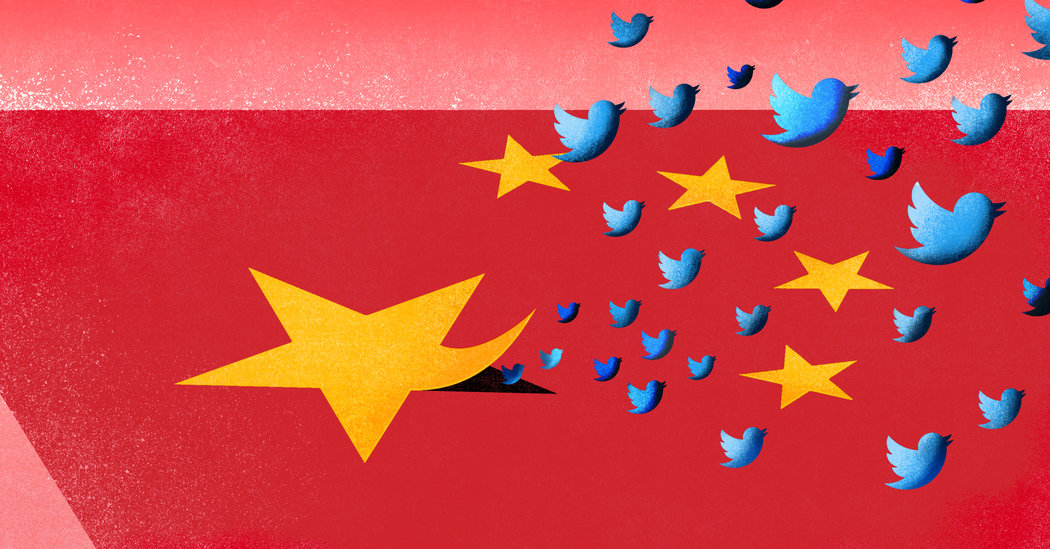 Behind China’s Twitter Campaign, a Murky Supporting Chorus Swarms of accounts are amplifying Beijing’s brash new messaging as the country tries to shape the global narrative about the coronavirus and much else.https://www.nytimes.com/2020/06/08/technology/china-twitter-disinformation.html

2/5 The fact that CCP’s disinformation campaign focused on Italy is crucial. Italy was the first country outside China to lock down. The rest of the world followed Italy’s lead. 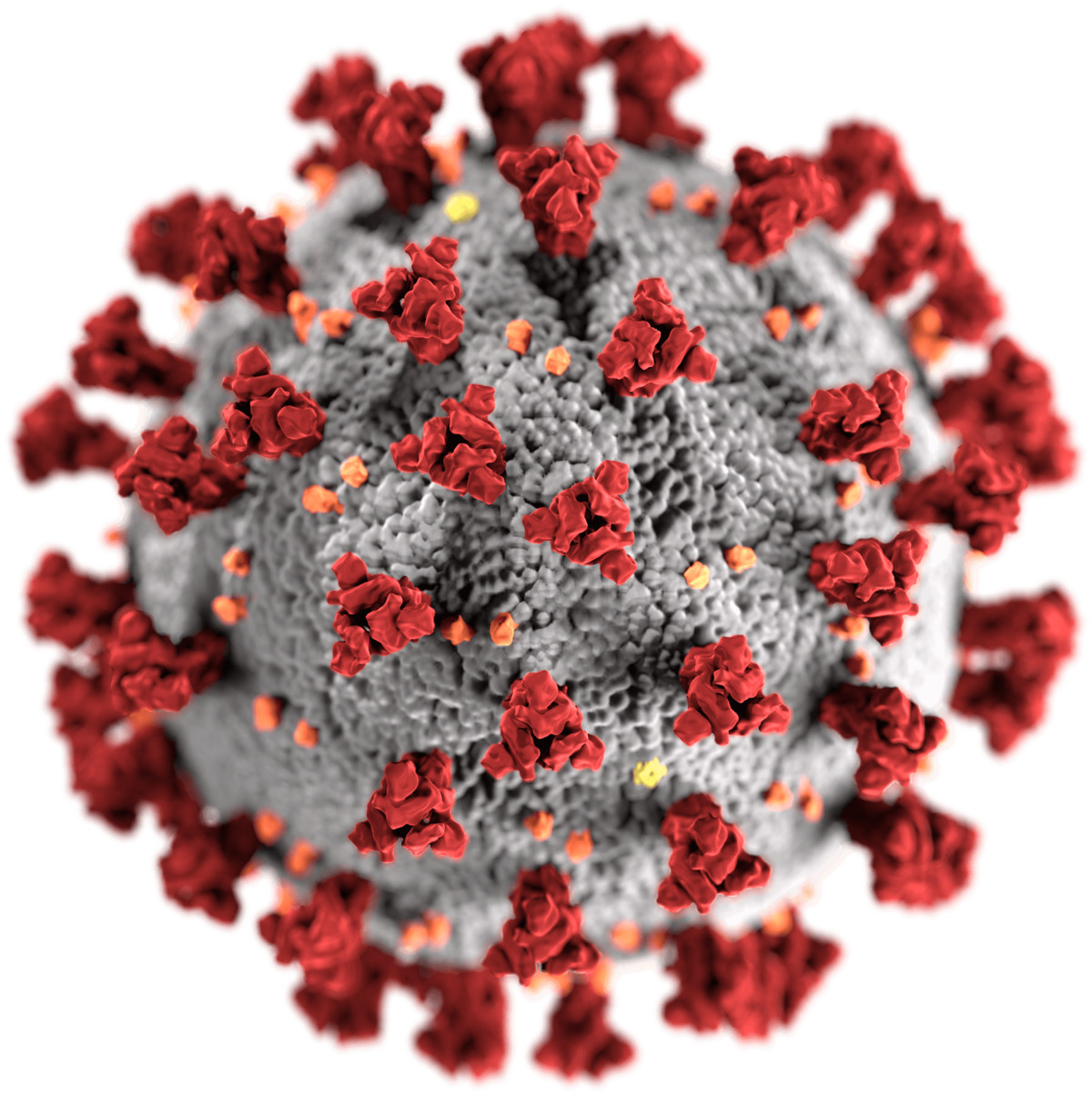 3/5 But CCP’s campaign wasn’t limited to Italy. The article states that this Tweet advertising China’s lockdown policy to the world is fake. It has 142,000 likes.

Tweets like this prove CCP was actively selling the world on Wuhan-style lockdowns in early March. 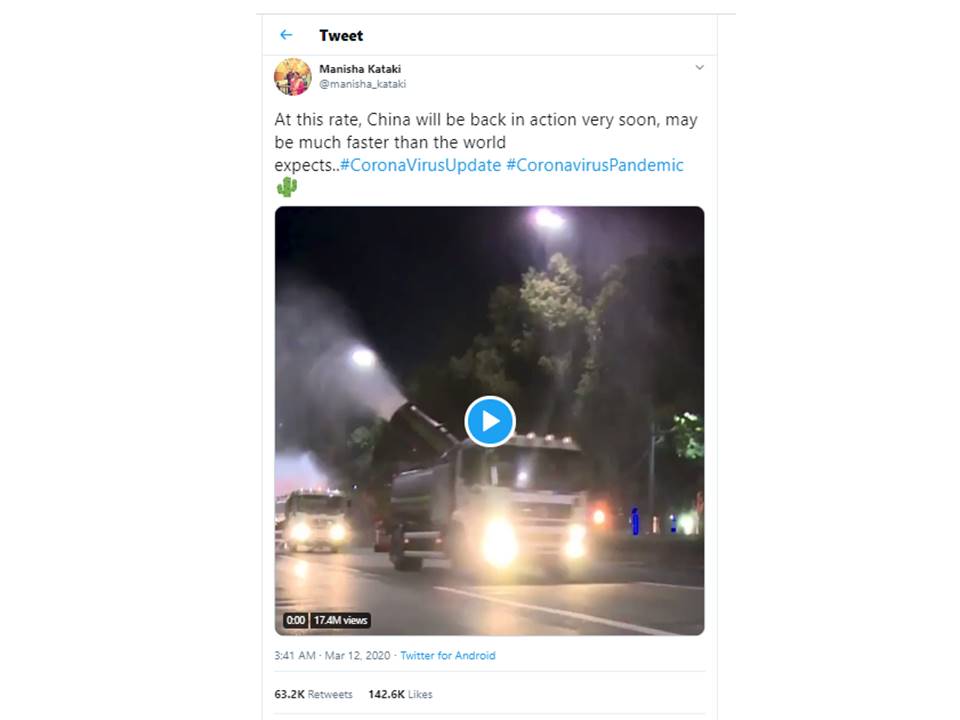 Each acct is suspicious—they Tweet incessantly about COVID until Floyd’s death, then solely BLM.

5/5 The sheer scale of this operation and the number of accounts involved, and its influence around the world, is really remarkable.

Thousands of accounts tweeting incessantly about COVID hysteria, then pivoting to incessant BLM and anti-police propaganda, in every country.

But none of the fake accounts involved in the ring described above were suspended. This problem is much larger than Twitter acknowledges.

7/5 More than 50 NIH scientists fired due to China ties. Hundreds more under investigation. 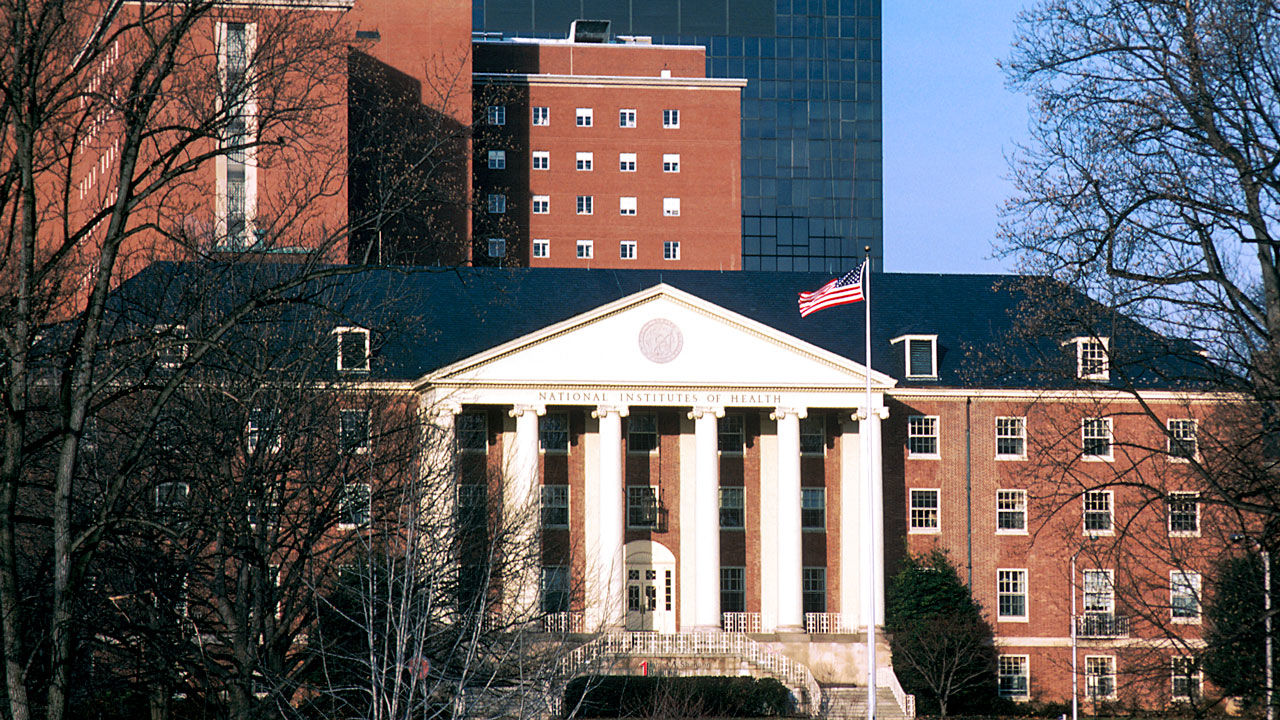 Fifty-four scientists have lost their jobs as a result of NIH probe into foreign ties New data reveal extent of ongoing investigationhttps://www.sciencemag.org/news/2020/06/fifty-four-scientists-have-lost-their-jobs-result-nih-probe-foreign-ties

8/5 Though CCP’s influence operations in media, politics, and academia were surreptitious, its stance in support of global adoption of COVID lockdowns was explicit. Here is China’s foreign spokesperson promoting strict social distancing among children:

10/5 “in fact, we have heard from federal, state, and even local officials that Chinese diplomats are aggressively urging support for China’s handling of the COVID-19 crisis. Yes, this is happening at both the federal and state levels.”

The Threat Posed by the Chinese Government and the Chinese Communist Party to the Economic and National Security of the United States | Federal Bureau of Investigation FBI Director Christopher Wray’s remarks at the Hudson Institute, Washington, D.C.https://www.fbi.gov/news/speeches/the-threat-posed-by-the-chinese-government-and-the-chinese-communist-party-to-the-economic-and-national-security-of-the-united-states

11/5 This collage is a tiny sample of the fake accounts CCP used to popularize COVID lockdowns.

In these Tweets, CCP sends its regards to the world by denigrating every other government in the world, using many dialects, and contrasting them with its authoritarian “success.” 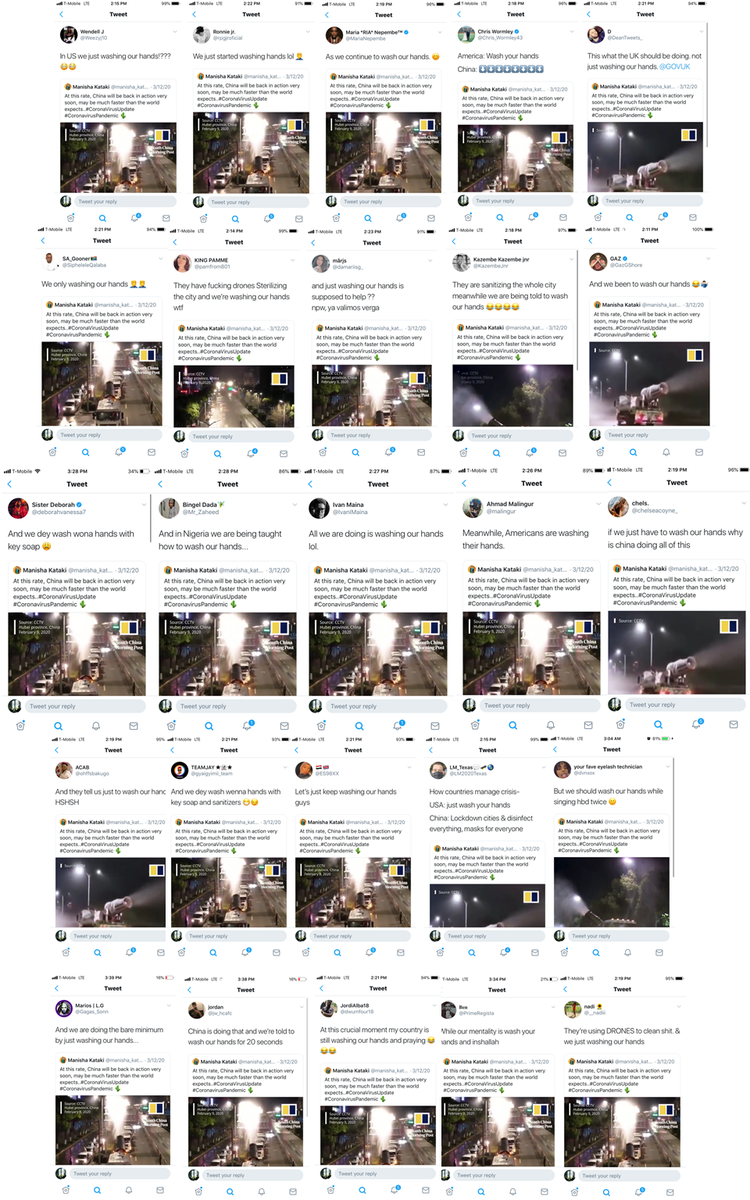 Here, hundreds of fake accounts whine about “washing their hands” while China locks down. Nearly identical Tweets are made in many languages. 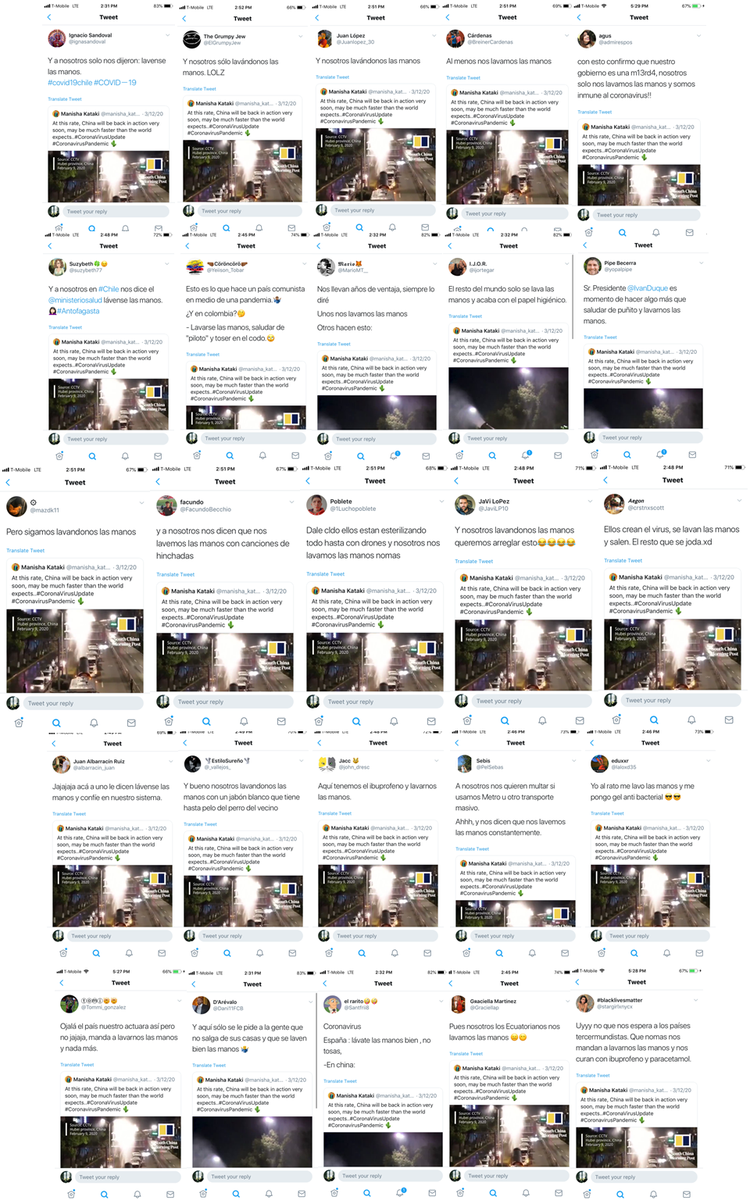 Behind China’s Twitter Campaign, a Murky Supporting Chorus Swarms of accounts are amplifying Beijing’s brash new messaging as the country tries to shape the global narrative about the coronavirus and much else.https://www.nytimes.com/2020/06/08/technology/china-twitter-disinformation.html

But Twitter lied. These fake CCP accounts, and presumably hundreds of thousands of others, are still doing CCP’s bidding. 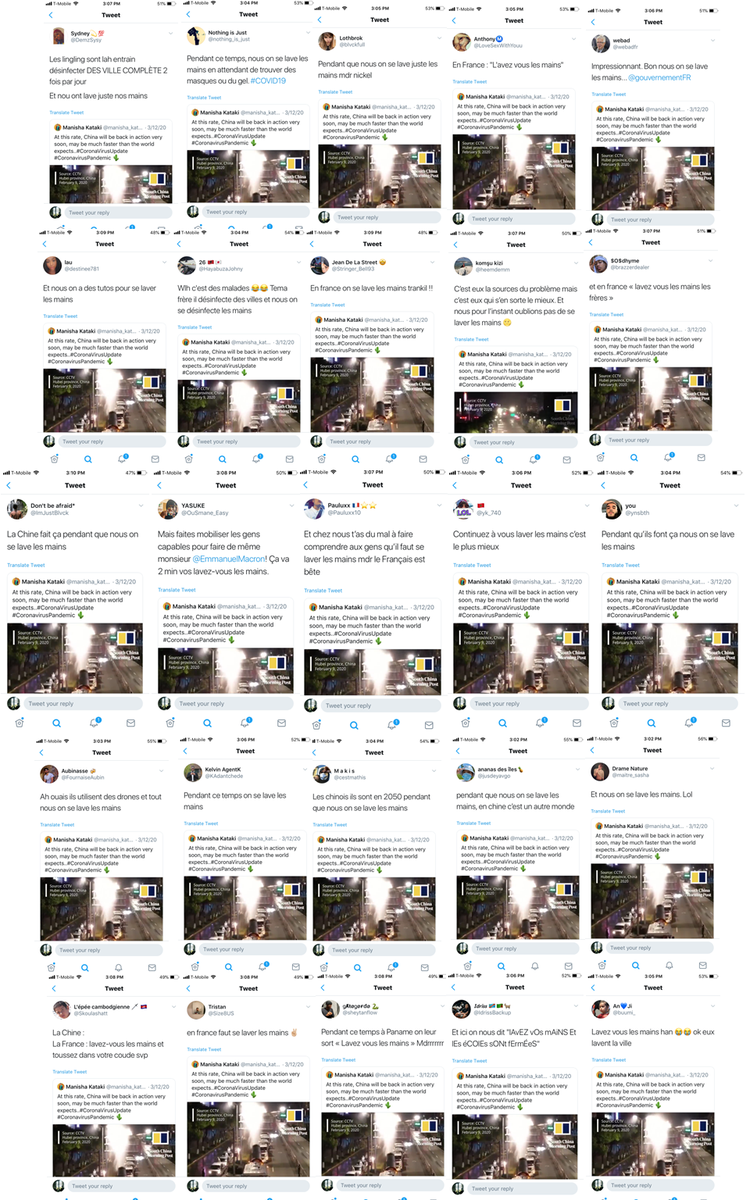 This is in addition to the 175 cases of undisclosed China financial ties earlier reported by the NIH, a much larger organization. 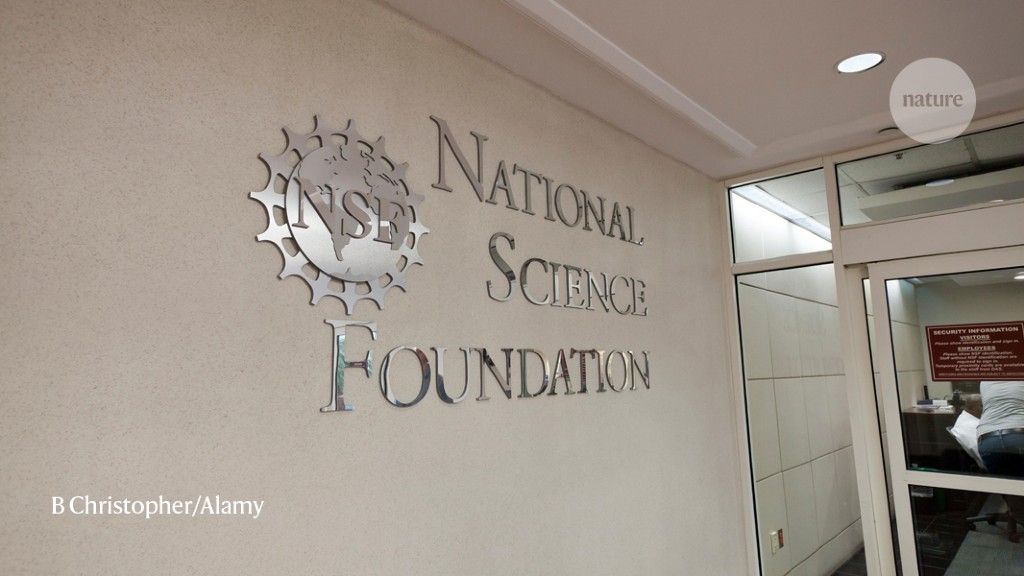 Exclusive: US National Science Foundation reveals first details on foreign-influence investigations The funding agency has taken action in 16–20 cases in which foreign ties were not properly reported.https://www.nature.com/articles/d41586-020-02051-8

15/5 “Sweden—partly due to its own COVID-19 response—has been a prime target of a Chinese campaign portraying Western democracies as weak against the threat. Sweden is one of few countries that ordered no lockdown and put its faith in herd immunity.” 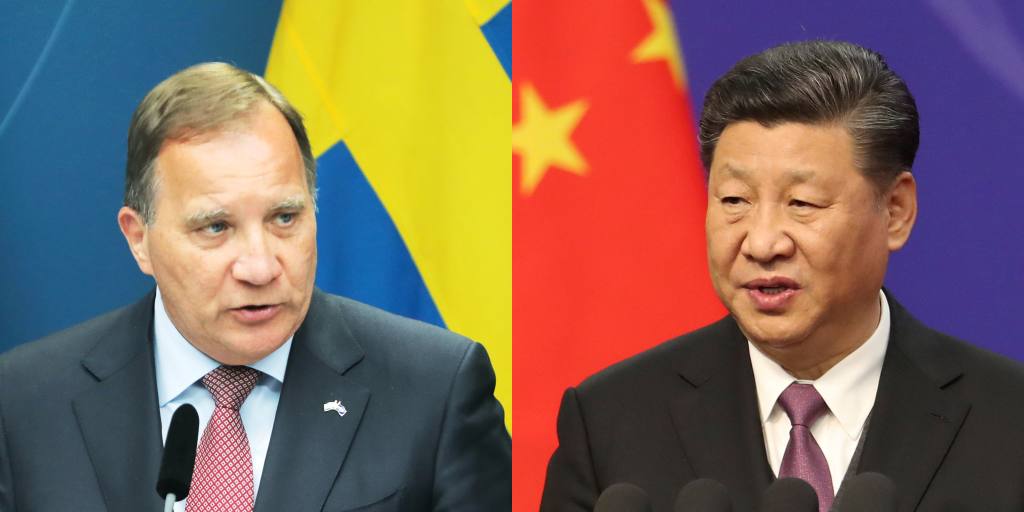 This video of a Wuhan man “falling dead” from COVID went viral in January. Farcical, in hindsight.

“not only the right thing to do, but it also showed other countries how they should respond in the face of such an acute threat. So, I think we have a great deal to thank China for”
globaltimes.cn/content/118726…

18/ @WHO was instrumental in pushing world leaders to adopt China’s lockdowns and insisting lockdowns not be lifted until strict tracing criteria were met.

Bruce Aylward is the same WHO leader who disconnected a live interview when asked about Taiwan.

‘Copy China’s response to COVID-19,’ WHO expert urges rest of the world Countries across the globe need to follow China’s example when fighting and preparing for COVID-19, a top World Health Organization (WHO) expert said on Tuesday upon returning from the epicenter of th…https://newseu.cgtn.com/news/2020-02-26/-Copy-China-s-response-to-COVID-19-WHO-expert-urges–OnNfwORI3u/index.html

Her decision didn’t sit well with Beijing. CCP’s army of fake accounts began filling her Twitter feed with abuse to punish her disobedience and pressure her to shut down her state. 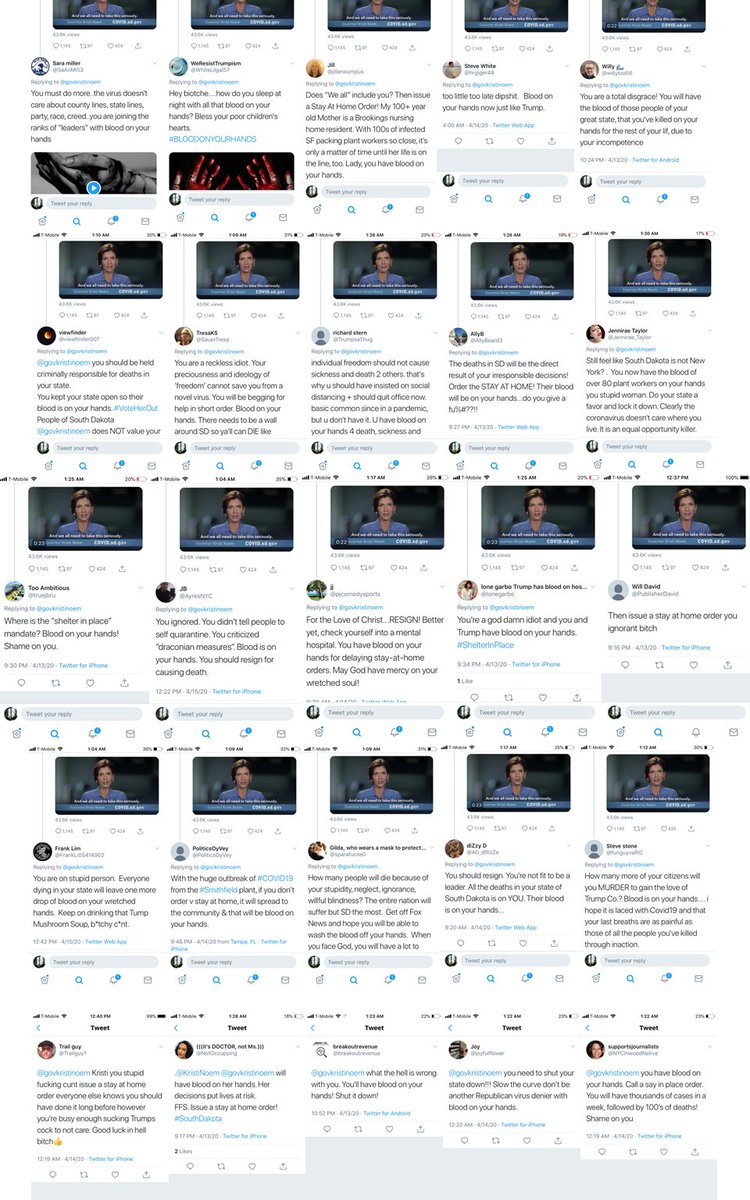 20/ By contrast, the accounts heap praise on governors who tighten lockdowns, like Dan Andrews, gov of Victoria, AUS. 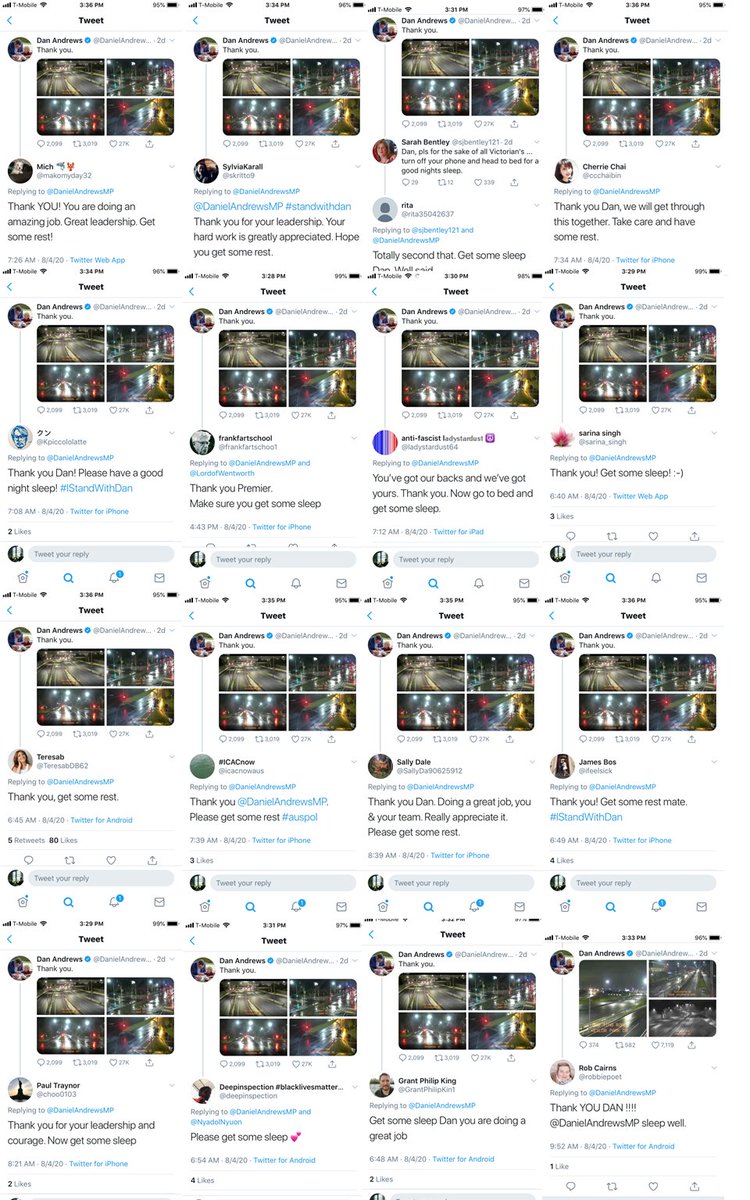 21/ @BorisJohnson initially opted for herd immunity. But on Mar 13, four days after Italy’s lockdown, CCP began storming his feed, likening his plan to genocide. These words almost never appear in his feed before Mar 12.

Tragically, the abuse worked, and UK locked down Mar 23. 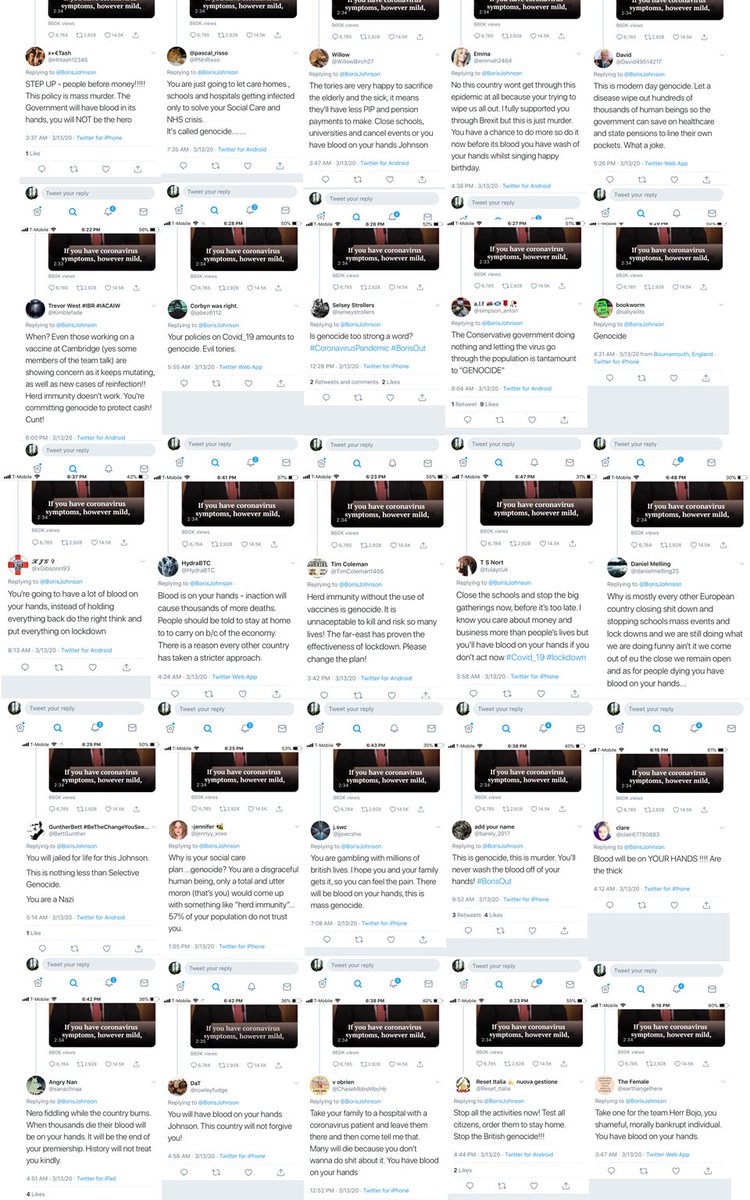 22/ The bold-faced lie of lockdowns is “China controlled the virus.” It’s an obvious lie—China’s data is manifestly forged. But CCP normalizes this Orwellian lie by demanding every elite publication and journal repeat it, transforming the snake oil of lockdowns into “science.”

24/ Hard to think of any place more ill-suited to a total lockdown than Africa, but that’s exactly what CCP’s fake accounts demanded of South African President @CyrilRamaphosa on March 22. The next day, they got what they wanted, and Ramaphosa announced a total lockdown. 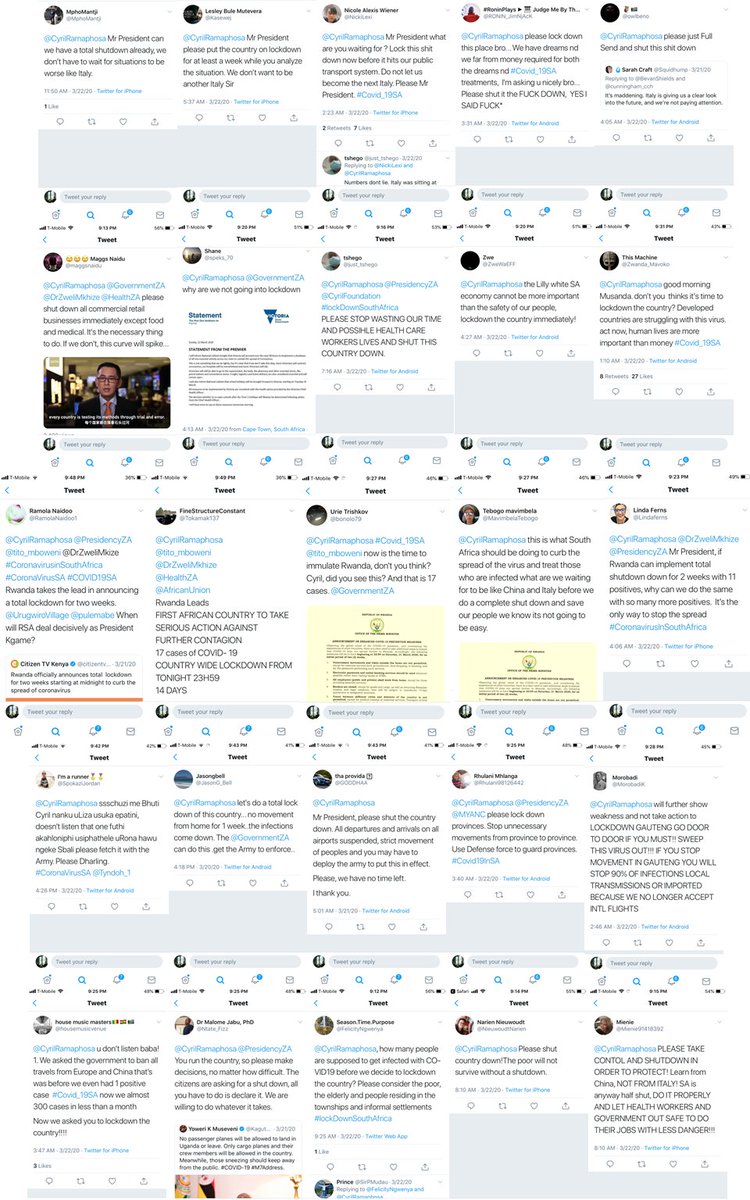 25/ India is a key rival of China, so CCP disinformation there is especially nasty.

On March 23, CCP’s army of fake accounts implored PM @PMOIndia to lock down India and order the army to “shoot on sight” to enforce it. The next day, Modi announced a destructive lockdown. 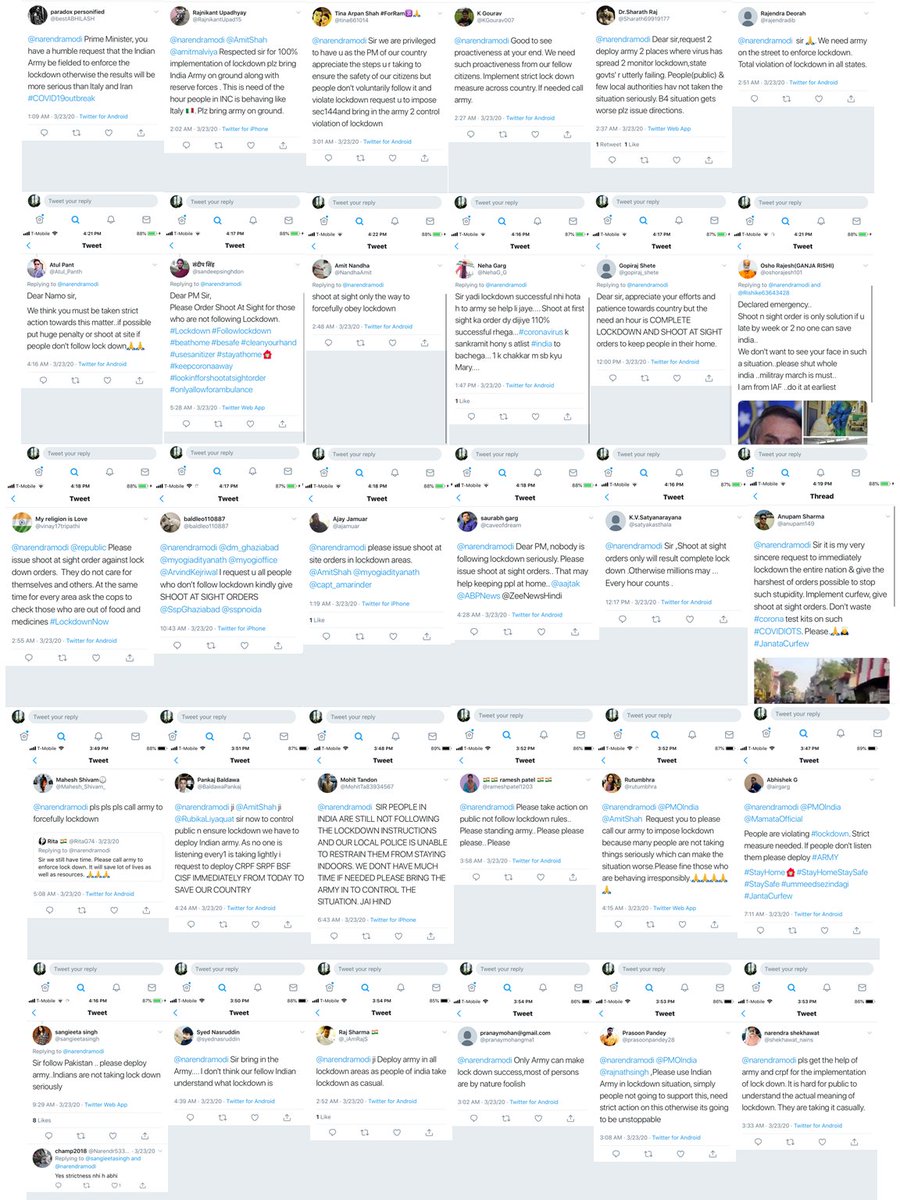 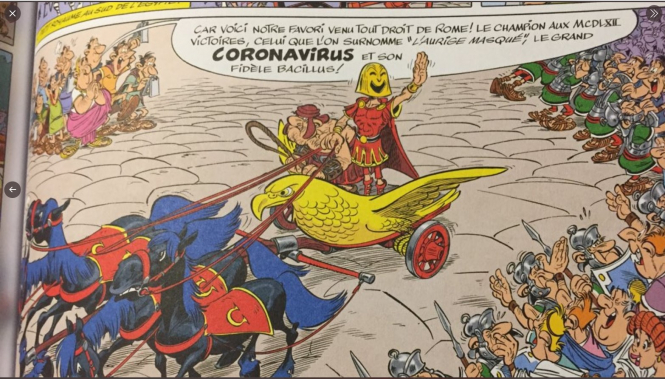 Someone’s take on the erosion of personal freedoms that’s doing the rounds on farcebook. 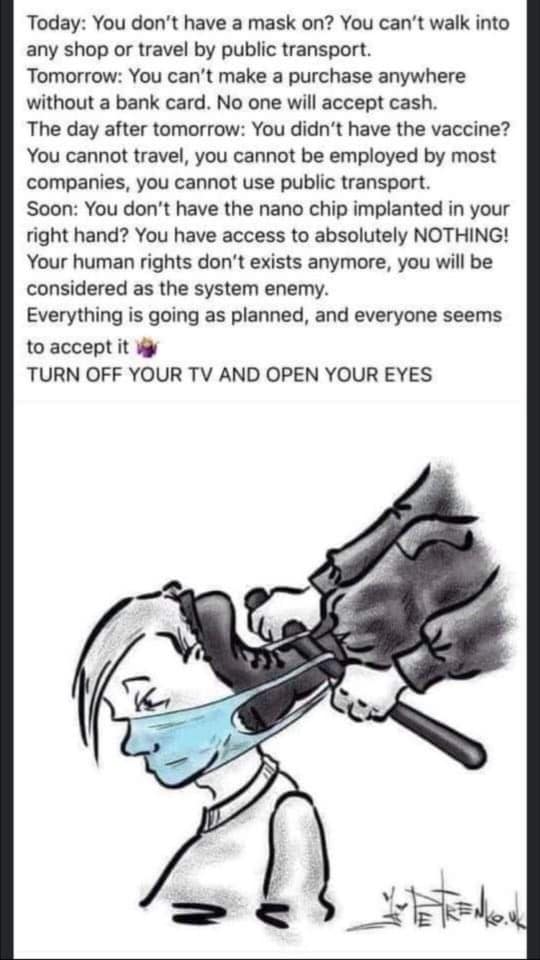 This may sound like a crazy conspiracy theory but the Canadian government have openly admitted to building internment/detention camps all across the country for “refusers” and those who don’t comply. 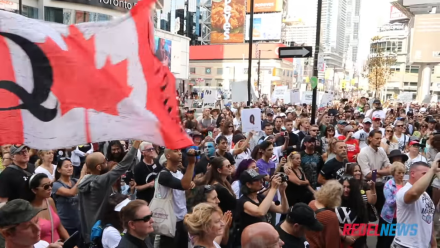 Canadians in Toronto, without masks and in defiance of regulations restricting outdoor gatherings to 25 people, demonstrate against COVID lockdowns earlier this month. By Editor, CAIRNS NEWSPOWER-m…

The CommonPass system, backed by the World Economic Forum (WEF), is designed to create a common international standard for passengers to demonstrate they do not have coronavirus.
However, critics of similar schemes point to concerns over the sensitivity and specificity of the tests in various countries amid fears over greater monitoring over people’s movements.
Paul Meyer, the CEO at the Commons Project, which was given startup funding by the Rockefeller Foundation two years ago and created the digital health pass, said countries that have closed borders and imposed quarantines are looking for ways to “thoughtfully reopen” their borders. 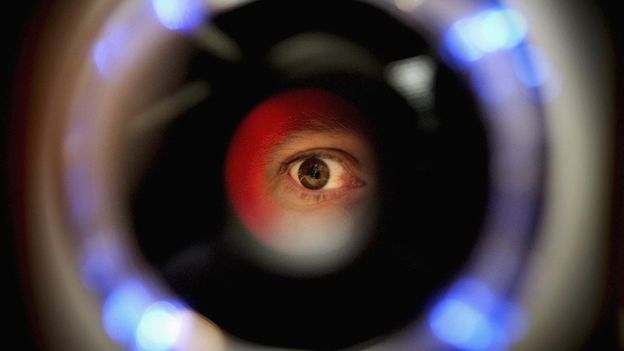 The grim fate that could be ‘worse than extinction’

What would it take for a global totalitarian government to rise to power indefinitely? This nightmare scenario may be closer than first appears.

Though global totalitarianism is still a niche topic of study, researchers in the field of existential risk are increasingly turning their attention to its most likely cause: artificial intelligence.

In his “singleton hypothesis”, Nick Bostrom, director at Oxford’s FHI, has explained how a global government could form with AI or other powerful technologies – and why it might be impossible to overthrow. He writes that a world with “a single decision-making agency at the highest level” could occur if that agency “obtains a decisive lead through a technological breakthrough in artificial intelligence or molecular nanotechnology”. Once in charge, it would control advances in technology that prevent internal challenges, like surveillance or autonomous weapons, and, with this monopoly, remain perpetually stable.