The entire artifice of the Wet Market Origin Story

It was the most plausible, based on scientific speculation at the early days. Epidemiologists had pointed at this type of environment for years. I think the jury is still out on this either, but as the research progresses and the facts emerge, we change our minds. It may not be the Wuhan wet market, but another smaller market, with animals being transported.

This alternative of a bioweapon - no I don’t think so. Its a very poor bioweapon.

But there is experimentation on viruses all the time, and an accidental release is a danger worldwide. I’m still waiting for actual evidence to merge though about the Wuhan lab.

It was the most plausible, based on scientific speculation at the early days. Epidemiologists had pointed at this type of environment for years.

It was if you were a scientist. It wasn’t if you were a Sinologist to even a small extent. If you read one book on China in the 20th century you’d immediately have doubts on their prepackaged stories. Its the product of a lot of expert propaganda thinking but it was fishy from day 1.

The Jury is Out: Mao Zedong Swam Faster Than Today’s Olympic Champions

I’ve read quite a bit on China, travelled there too. Its a corrupt senior hierarchy controlling a naive population. But I liked the people on a one to one basis - this was some time ago before the recent wave of xenophobia I should say.

Fact is, the wet market seemed a reasonable assumption, based on a cluster that came from there, and studies of SARS.

Now, its being questioned on a scientific basis. This seems natural too. There’s going to be a lot of reports and debate on this before it settles down. Nothing strange about this.

But I can’t see how we can go straight from that, to a released bioweapon from a BSL4 lab, as I’ve seen suggested here.

The truth is often more mundane.

Ah I get Mercury is Aegis !
“Fact is” you have some verbal tics that betray you.

Not sure if this classifies as ad hominem?

Play the ball, not the man, etc, etc.

(https://nypost.com/2020/02/22/dont-buy-chinas-story-the-coronavirus-may-have-leaked-from-a-lab/) piece by Steven Mosher saying that we couldn’t trust China’s story about the origins of COVID-19. He argued that the virus might — might — have jumped to the human population thanks to errors at a Chinese laboratory in Wuhan, rather than via that city’s now-notorious “wet market.”

The piece was widely read online — until Facebook stepped in.

The social media giant’s “fact checkers” decided this was not a valid opinion. If you tried to share Mosher’s column on Face­book, the social network stuck a “False Information” alert on top, saying that finding was “checked by independent fact-checkers” and preventing your friends from clicking to connect to the original article to see for themselves.

Michael McDowell: We must ease the coronavirus lockdown

This Conspiracy Theory appears to be going mainstream

I had wondered about this appearing on RTE, seeding the “conspiracy theory” meme, the soup du jour of journo’s et al, the vernacular of the fringe gone mainstream. I never thought I would see the day.

i.e. All the hallmarks of getting ahead of another story/event, cause the tests tests tests and other sideshows in the US had lost steam so now we are on to the reported Hack of the Wuhan Lab, Gates Foundation and the WHO.

Will the victim card be played if nothing monumental comes out or is this tactical nuke, in the information war?

It will be the interesting if it turns out to be a serious and novel security breech. It might not.

Either way, I think if and who get the initial blame or how it is spun out of the gates, maybe via the MSM, will be the thing too watch and the of course the questions fired at Trump and maybe the appearance of more sudden leaks to spin it onion way or the other and on it goes, round and around…

Two glitches in the Matrix in one week. I now completely agree with Alan Kelly

Are there still only a handful of people here who can actually see what’s coming?

Keep in mind the level of monitoring and control infrstructure that has been put in place in China before the Virus even arrived.

You can bet it is plugged into a matrix of realtime AI.

Commentary: Why China’s social credit system gets thumbs-up from citizens

Many Chinese people think that the new social credit system will combat a nationwide crisis of trust, says an expert.

LONDON: The Chinese social credit system has been given an unequivocally negative reception by the media in the West.

Set to be rolled out nationwide in 2020, the system has even been described by one journalist as China’s “most ambitious project in social engineering since the Cultural Revolution”.

Oh btw @snaps how are those computer glitches and reduced battery performance going - any resolution?

iOS update 13.4.1 has the tracking - Not sure where Android is at yet. 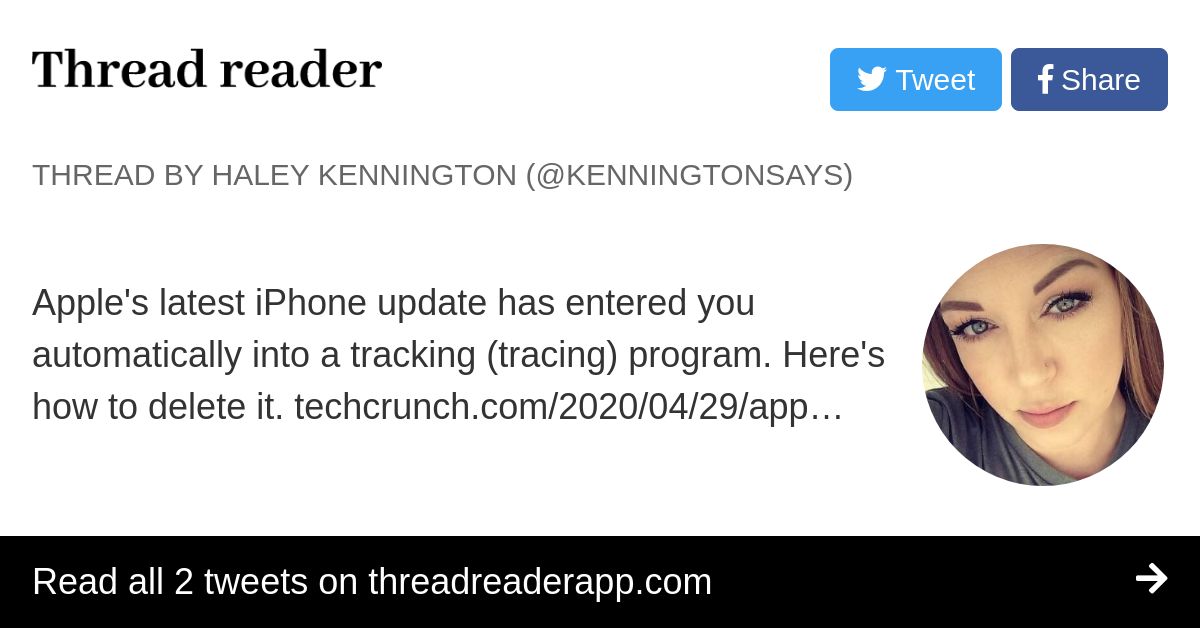 Thread by @kenningtonsays: Apple's latest iPhone update has entered you...

Thread by @kenningtonsays: Apple's latest iPhone update has entered you automatically into a tracking (tracing) program. Here's how to delete it. techcrunch.com/2020/04/29/app……

Last week, Apple CEO Tim Cook told EU Commissioner Thierry Breton that the API would be arriving shortly, and this version is indeed now available — albeit to a specific and limited group that includes select developers working on behalf of public health authorities globally, according to the companies. This is a test release that’s intended to provide the opportunity for development and feedback in advance of the API’s public release in mid-May, at which time developers will be able to use the software feature on devices with publicly available apps released through the iOS and Google software stores, respectively.

Apple and Google have released the first version of their exposure notification API, which they previously called the contact tracing API. This is a developer-focused release, and is a seed of the API in development, with the primary intent of...

The flu of 1968-69 killed 80,000 in Britain,but there was no house arrest & the country didn't shut down: https://t.co/Nzq5GxibX9 'Perhaps the 1968 pandemic did not prompt a worldwide economic shutdown because the generation in power had a more sanguine attitude towards diseases.

Woodstock Occurred in the Middle of a Pandemic

In my lifetime, there was another deadly flu epidemic in the United States. The flu spread from Hong Kong to the United States, arriving December 1968 and peaking a year later. It ultimately killed 100,000 people in the U.S., mostly over the age of 65, and one million worldwide.

Lifespan in the US in those days was 70 whereas it is 78 today. Population was 200 million as compared with 328 million today. It was also a healthier population with low obesity. If it would be possible to extrapolate the death data based on population and demographics, we might be looking at a quarter million deaths today from this virus. So in terms of lethality, it was as deadly and scary as COVID-19 if not more so, though we shall have to wait to see.

“In 1968,” says Nathaniel L. Moir in National Interest , “the H3N2 pandemic killed more individuals in the U.S. than the combined total number of American fatalities during both the Vietnam and Korean Wars.”

And this happened in the lifetimes of every American over 52 years of age.

I was 5 years old and have no memory of this at all. My mother vaguely remembers being careful and washing surfaces, and encouraging her mom and dad to be careful. Otherwise, it’s mostly forgotten today. Why is that?

Nothing closed. Schools stayed open. All businesses did too. You could go to the movies. You could go to bars and restaurants. John Fund has a friend who reports having attended a Grateful Dead concert. In fact, people have no memory or awareness that the famous Woodstock concert of August 1969 – planned in January during the worse period of death – actually occurred during a deadly American flu pandemic that only peaked globally six months later. There was no thought given to the virus which, like ours today, was dangerous mainly for a non-concert-going demographic.

As a matter of record. David Icke has has channels removed from youtube and is also banned from Facebook, of course he still has his own long running web presence at www.davidicke.com

These lockdown vids keep disappearing. Watch while you can.

Wonder why they are so petrified of what he has to say.