Went quiet for a bit today and now is back with lots of smoke (maybe steam), lava and kabooms!

I think this was it waking up earlier today from a brief respite.

Pretty spectacular pictures here. That looks like the lave flow is moving a lot faster now.

Utterly sublime but also everyone needs to get off that Island and maybe the other Islands too and the world needs to keep keep an eye out for a massive quake.

I understand the logistical demands of evacuating 3,4,5 or more islands is nuts and never been done before, but there is always a first time.

This is the only real danger…

Lava and ash / cinder falls may look spectacular but it pyroclastic flows that will really ruin you day.

The volcano I used to live close to had a long history of lahars due to the glacier on top melting during eruptions . But due to the geometry of the terrain all the mud flows were in the opposite direction to where I lived. Same went for pyroclastic flows. Now Tacoma would be toast but the general opinion was that it being buried by a 30 foot deep mudflow would be a huge improvement over what is currently there.

Indeed, but err… the lava is getting close to the coast, and this may cause serous problem.

Getting too close to an ocean entry, either on land or from the sea, is potentially deadly. Primary hazards include:

…A white plume on the edge of an active lava delta marks where lava meets seawater—this plume can cause skin and eye irritation and breathing difficulties and should be avoided. As hot lava boils cool seawater, a series of chemical and physical reactions create a mixture of condensed, acidic steam, hydrochloric acid gas, and tiny shards of volcanic glass. Blown by wind, this plume creates a noticeable downwind haze, known as “laze” (short for lava haze

Exposure to ash can be harmful. Infants, elderly people, and people with respiratory conditions such as asthma, emphysema, and other chronic lung diseases may have problems if they breathe in volcanic ash. Ash is gritty, abrasive, sometimes corrosive, and always unpleasant. Small ash particles can abrade (scratch) the front of the eye. Ash particles may contain crystalline silica, a material that causes a respiratory disease called silicosis.>

Most gases from a volcano quickly blow away. However, heavy gases such as carbon dioxide and hydrogen sulfide can collect in low-lying areas. The most common volcanic gas is water vapor, followed by carbon dioxide and sulfur dioxide. Sulfur dioxide can cause breathing problems in both healthy people and people with asthma and other respiratory problems. Other volcanic gases include hydrogen chloride, carbon monoxide, and hydrogen fluoride. Amounts of these gases vary widely from one volcanic eruption to the next.

Although gases usually blow away rapidly, it is possible that people who are close to the volcano or who are in the low-lying areas downwind may be exposed to levels that may affect health. At low levels, gases can irritate the eyes, nose, and throat. At higher levels, gases can cause rapid breathing, headache, dizziness, swelling and spasm of the throat, and suffocation. 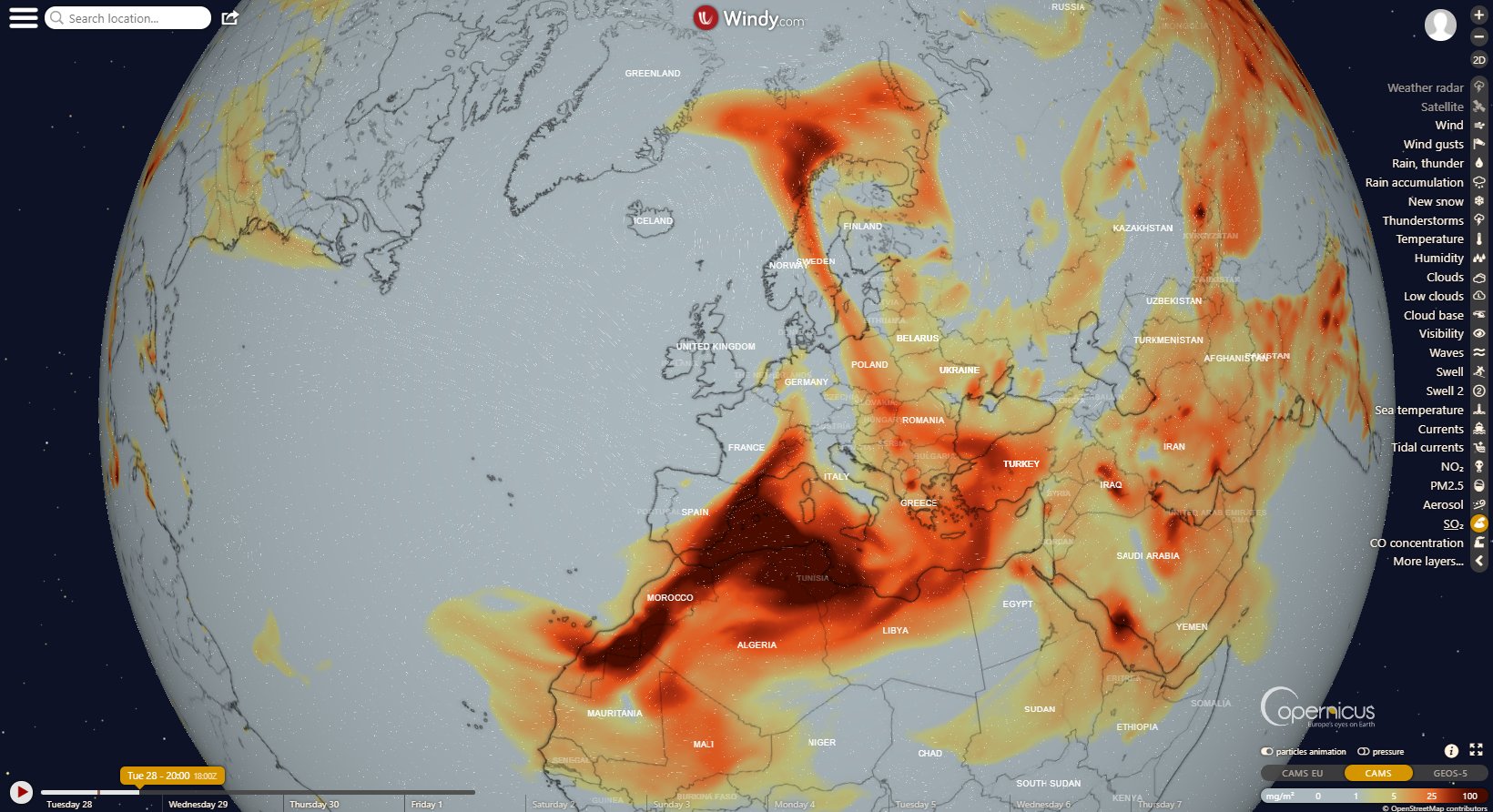 Per the video linked to in previosupost:

Update: La Palma: Lava from the La Palma volcano has released a toxic cloud by devouring plastics and fertilizers from greenhouses.

I Want To Dive Into Your Ocean

A 2013 article that raises the question - How in shape are the Atlantic array of Tsunami early warning bouys in the Atlantic?

Tectonic plates are slowing down/blocking up globally.
This is an increasingly high pressure situation.
Global plate rupture/megaquake on the way.

Nope. Geologically speaking this only kinda happens when all continental landmasses all locked up in a super continent. Which has not happened for about 200 million years. Given the usual dance of assembly / disassembly wont happen for another 150 million plus. Now what we are overdue is for a very large earthquake in an unexpected place. Like the Lisbon Quake and the New Madrid one.

Now when it comes to sheer economic mayhem then its a toss up between the next Big One in Kanto and the Southern San Andreas. The next Kanto Quake one is the real Black Swan. Most of Tokyo was burnt down after the last one. And Kobe in '95 shows it will happen again.

The quakes iirc began on Sept 11

What are the odds now?

… NOAA and the U.S. National Tsunami Hazard Mitigation Program (NTHMP) are providing the framework for the LANTEX21 tsunami exercise, which is being conducted to assist tsunami preparedness efforts throughout the Atlantic region. Recent earthquakes and their associated tsunamis, such as those in Samoa-2009, Haiti-2010, Chile-2010, Japan-2011, and Chile-2015, attest to the importance of proper planning for tsunami response. Similar recent exercises in the Pacific and Caribbean Basins have proven effective in strengthening preparedness levels of emergency management organizations.

This exercise will provide simulated tsunami alert messages from the NOAA/NWS National Tsunami Warning Center (NTWC) for the eastern coasts of Canada and the United States as well as Puerto Rico and the US/British Virgin Islands. The alert is based on a tsunami which is generated by a magnitude 8.8 earthquake located approximately 345 miles west southwest from Lisbon, Portugal and 510 miles west of the Straits of Gibraltar at 36.0oN, 15.0oW and a depth of 15 km (Figure 1). This source was originally intended to be used for a LANTEX20 exercise, but that exercise was cancelled to the emergence of the Covid-19 pandemic.

The fault system offshore of Portugal is responsible for the 1755 Lisbon earthquake. At estimated magnitude 8.5 to 9, it is the largest known historic earthquake to impact Europe and northern Africa. Various studies have located the epicenter at about 300-

400 km southwest of Lisbon in the Gorringe Bank, along the Africa-Eurasia plate boundary (Figure 2), but the exact source details are not well agreed upon. Local tsunami run-ups were between 5 and 15 meters, and the waves caused devastating regional impacts. The combined earthquake and tsunami killed an estimated 70,000 people. Distant tsunami observations were made across the Atlantic in Newfoundland and Bermuda, and there was recorded runup of 3-5 m at Antigua.

The Africa-Eurasia plate boundary extends from the Mid-Atlantic Ridge triple junction, near the Azores, eastward to the Strait of Gibraltar. In this area the African plate rotates counterclockwise relative to the Eurasian plate at a rate of about 4 mm/yr, relatively slow compared to other active plate boundaries. Nevertheless, multiple large magnitude offshore earthquakes have occurred in the region and been seen to generate tsunamis. In addition to the 1755 event, these include a M7.6 earthquake in 1816, and a M7.9 earthquake in 1969. The 1969 event produced a tsunami runup of 0.9 m in Morocco.

This plate movement has caused various types of deformation: extension along the Terceira Ridge around the Azores Islands in the west; strike-slip motion along the Gloria Fault in the central segment; and convergence and collision in the Gorringe Bank and the Strait of Gibraltar to the east. In the west and central segments, the Africa-Eurasia plate boundary is a well defined narrow fault zone. East of the Gloria

Fault, it becomes a diffuse collision zone. The actively deforming belt is about 200 km wide in the Gorringe Bank, and widens to more than 500 km east of Gibraltar.

The collisional stress not only loads major structures within the collision zone, where great earthquakes like the 1755 Lisbon quake originated, but also many onshore crustal faults at the Iberia and Africa continent margins. The most notable is the active fault zone in the Lower Tagus Valley (LTV). Several large historical earthquakes, including a 1531 quake estimated at M7+ and a 1909 M6.3, occurred on the LTV. The 1531 event caused a local tsunami. One study also proposes that the offshore 1755 earthquake triggered an onshore rupture on the LTV fault. The possibility of cascading rupture across multiple faults increases the potential for very large earthquake ruptures in the region, and therefore also increases the tsunami hazard.

Tsunami warning services for the continental United States and Canada are provided by the NTWC in Palmer, Alaska, while the Pacific Tsunami Warning Center (PTWC) in Pearl Harbor, Hawaii provides services for locations within the Caribbean region. These Centers issue messages to the region approximately two to six minutes after an earthquake’s occurrence. The NTWC products include warnings, advisories, watches, and information statements.