London leading by example - Ireland next? 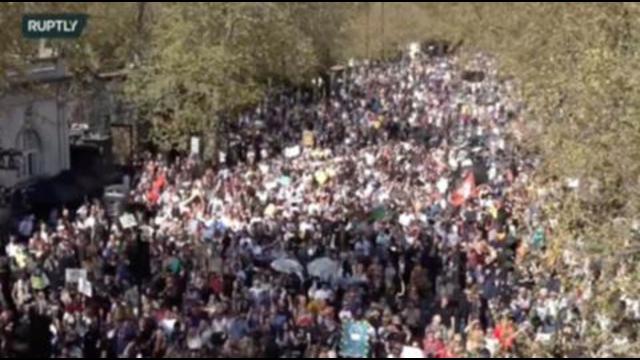 Thanks to Ruptly for the footage. COMMON LAW: Learn Common Law With Knowledge Is Power (Work your way through tabs at the top of page) - http://knowledgeispower-uk.weebly.com/ Meet Your Strawman (Article) - https://www.ruralmoney.com/meet-you…

I wouldn’t hold me breath

I see no reports of crowds in London on the BBC, demonstrations that large would be the main headline, but there are reports about crowds in Wales. 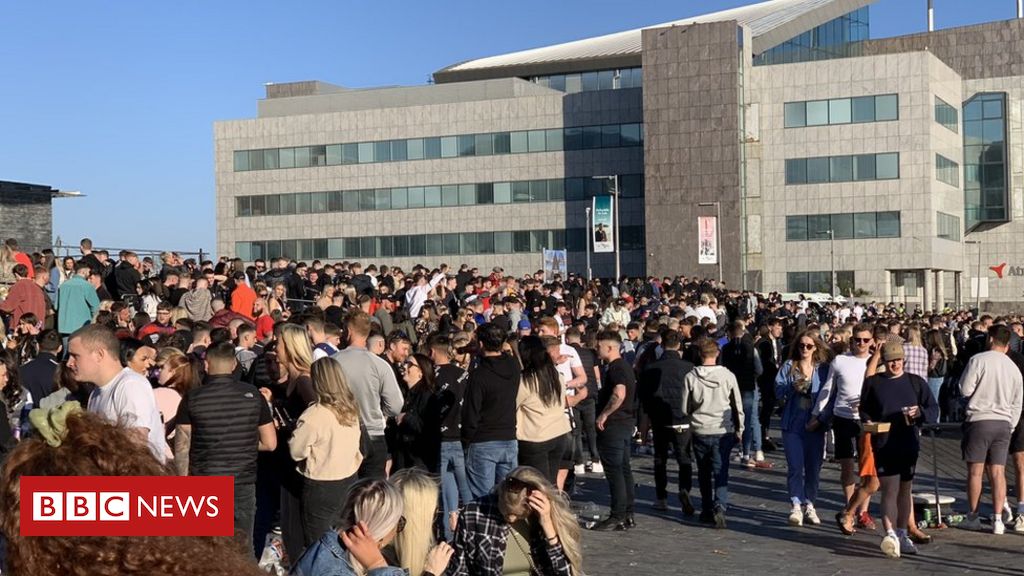 Covid: Police pledge to break up crowds at hotspots

Action is being taken at hotspots as Covid rules are changed to allow six people to meet outdoors.

Something does not look right about that video, was it from a couple of years ago?

It was very much today. Family members in attendance . Estimated 60 to 70 thousand at least. Still going. You will not see this on BBC or rte. Post pictures 2morrow. Count for yourself 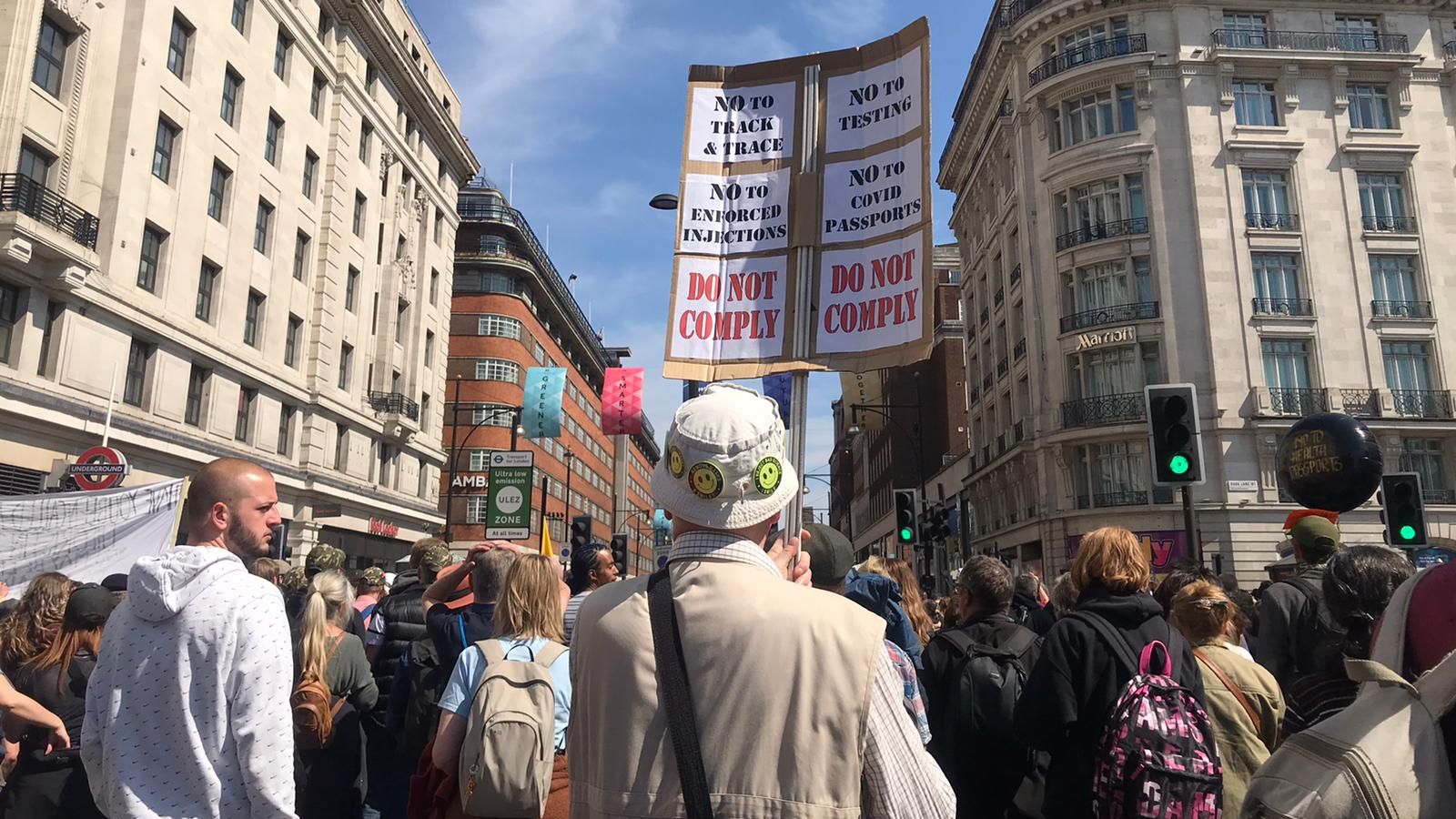 Oxford Street shoppers have been told to take their masks off by protesters spouting disproven conspiracy theories about vaccines. 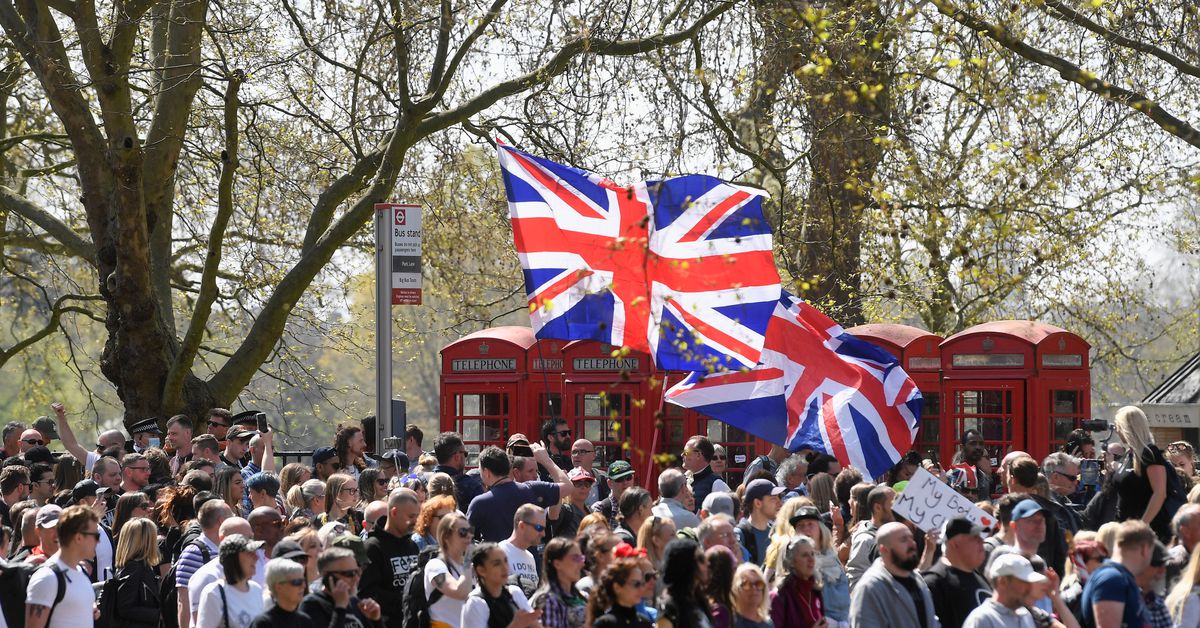 Several thousand anti-lockdown demonstrators marched through central London on Saturday despite restrictions on mass gatherings during the COVID-19 pandemic.

Thanks, for proof, so it seems that the official media is burying the story!

Sky News is no longer owner by Murdock, its basically NBC now. So even bigger lying bastards than the BBC.

I have not seen on the ground video from todays demos yet but the last demo in London were very large but the BBC coverage was grudging and the video they showed was very deliberately edited t o make the crowds look far smaller than they actually ware . The BBC used standard TV news editorial tricks. Like do a narrow shot with constant jump edits rather that the normal wide shot with slow panoramic pan from multiple angles used when showing large crowds in a TV news piece. Once you knwo what the editing tricks are is very easy to spot the editorial opinion of the news editor. Just from which images they show and how they show them

A very quick search. Video of the march you wont see on the BBC or Sky

Based on a rough “crowd block’ing estimate” 50K to 70K looks reasonable from this video. You need a shot from the air or high building to get a better estimate.

Saw another video. Main march body took more than 35 min to pass single point. Not continous very high density crowd but at least in the 600/1000 per min range . So main body around 40K plus. More at other locations.

Not the Countrywide Alliance marches level of attendance but not bad considering the huge and very heavy handed police presence. The level of police intimidation has been very high and unrelenting at these demos. Considering how they treated the BLM and ER marches with kid gloves the police have lost a huge amount of support from a traditionally very pro police and very law abiding population.

Although some twitter reports that there was trouble at the end.

Amazing, the BBC have completely suppressed the story, not a single mention anywhere on their website!
At least RTE had a small mention down the page https://www.rte.ie/news/world/2021/0424/1211904-london-covid-protest/

Jesus… What Happened To Us?

Well they have finally posted a story about the events of yesterday, but played down the size as much as possible while emphasizing the attacks against the police at the end of the day.
Which, if the tweets are to be believed, were provoked by police action. 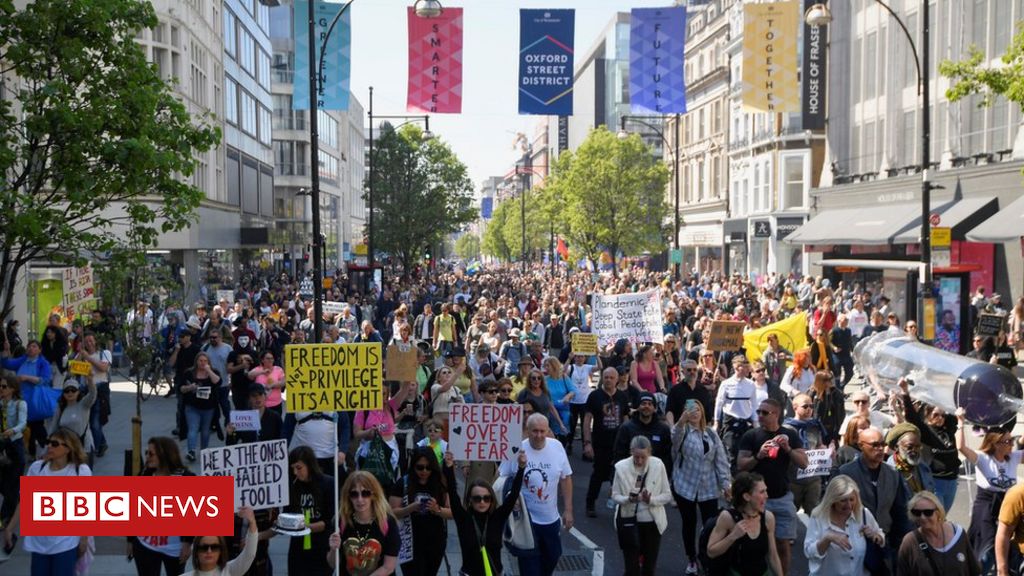 The Metropolitan Police says eight officers were injured during Saturday's protest in London.

Although it might not be obvious from the online video I was watching a live stream a few weeks ago of a previous London demo and it was very obvious the police were going round trying to provoke a response from various demonstrators, especially those taking video. I noticed that instinctively people would to start tovideo each other when the police moved up close. So that there was multiple independent evidence of what the police were doing if they tried to grab someones recording device and provoke an “incident”.

I really had not seen that kind of behavior from the police in decades. Since the 1980’s. Not just in the UK but in the US and even France. I had watched a lot of live streaming of gilet jaune demos in France and even with hard core casseurs trying to cause trouble even the French riot police were less provocative that the the Met in London at the Anti-Lockdown demos.

The contrast with their utterly supine policing of the BLM and Extinction Rebellion demos was startling . Based on what I have been seeing every single violent incidence at the demos was provoked by the police. Its got to such a stage that the organizers are warning marchers beforehand to look out for deliberate police incitement.

The police have been ordered to create incidents so that the media can run “violence at demo” stories after every demo. Pretty standard procedure in these situations. When the political class is trying to survive a very serious self created fiasco. 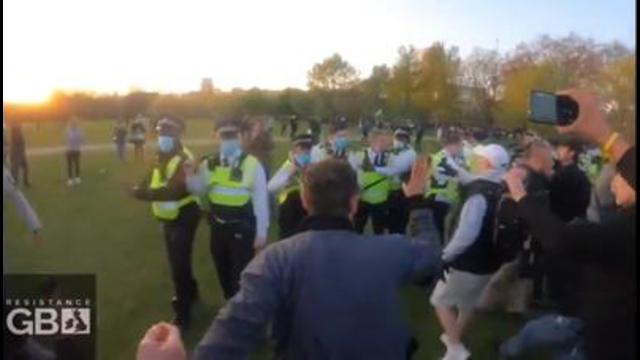 The Protestors CHASE The Police Out Of Hyde Park Yesterday 24th April 2021 MUST...

Mirrored - https://brandnewtube.com/watch/police-chased-out-of-hyde-park-after-attacking-peaceful-protest_CO75X2dOp8PrAyL.html COMMON LAW: Learn Common Law With Knowledge Is Power (Work your way through tabs at the top of page) - http://knowledg…

They certainly are - when people have nothing left to lose, and they’ve lost everything they lose it!

Very good work by the event “marshals”. Use of point deescalation and then controlled serious push back to assert area control and eventual field control. The police were very badly led and manged and had no small unit disciple. No wonder they fell apart. The attempt at police intimation at the end by sheer numbers was interesting. Having watched how the French police do this stuff, especially the CRS, the Met really are a bunch of fucking amateurs. Someone could have got seriously hurt if the event “marshals” had not done such a good at managing the situation. They seemed to be the only professional acting people there. 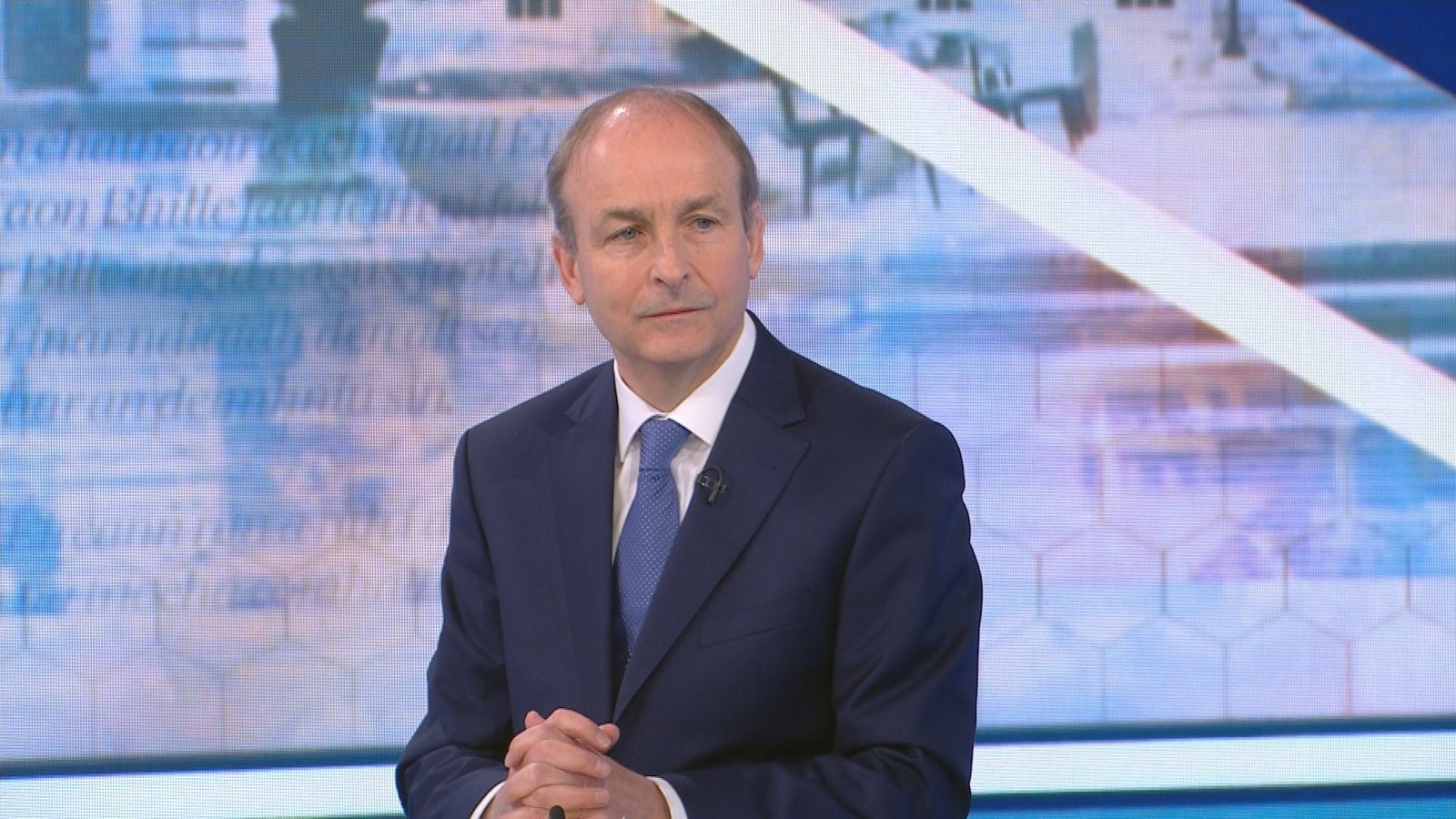 The Taoiseach has said that one million first doses of Covid-19 vaccines have been administered to date.