Main Square of Madrid taken over -An Arab Spring in Spain?

“For the first time, Spain’s civil society bypassed the established channels to mount its own public protest against the country’s political class. On Sunday in over 50 cities across Spain, thousands of people heeded the call of an organization called Democracia Real Ya, and joined another 200 small associations to scream out their frustration with politicians.”

Yes, we here in Ireland, Greece and Spain have been forced by our ruthless and brutal dictatorships into buying gaffs and dodging taxes.

Interestingly the website they quote, burbuja.info, is the Spanish equivalent of The Pin.

[Disclosure: I work for Storyful]

It seems its getting bigger!
Berlin, London, Paris… In the next few days we’ll find out if this movement sticks around, or gets blown away.
If the former, we could be witnessing the beginning of something beautiful, although I believe it’s a bit early for this sort of thing. Sadly most of the members of our societies are still in denial.

A 15-M blog states that similar protests are being planned across Europe, in cities such as Berlin, Paris, Birmingham, Istanbul, Budapest and Brussels: cort.as/0pLZ

No mention of Dublin as yet though

A 15-M blog states that similar protests are being planned across Europe, in cities such as Berlin, Paris, Birmingham, Istanbul, Budapest and Brussels: cort.as/0pLZ

No mention of Dublin as yet though

Dublin is too busy bringing entrepreneurs to the country - Bless em
independent.ie/business/irish/deutsche-bank-moving-central-hedge-fund-operation-to-dublin-2651369.html

The Portuguese staged a similar demonstration “Geração a Rasca” about a month ago.

It quickly died a death.

I don’t think people who live in free states with decent levels of social protection can reach the level of desperation needed to spark real revolutions in the way that Eastern Europe and North Africa happened.

There may well be more demonstrations in Paris, London, Budapest, wherever. If it happpens, it will probably turn out to be this generations Live Aid.

This type of thing couldn’t happen in Ireland.

Imagine the image tourists might get of Ireland Inc?

This type of thing couldn’t happen in Ireland.

Imagine the image tourists might get of Ireland Inc?

Well they wore ManU shirts to the anti Queen demos so anything is possible.

Read the Storyful and the Grauniad articles and I’m still not sure what specifically they are protesting about, they don’t seem too sure themselves.

At least the Ballyhea protestors have a focus - burn the bondholders!!

This is a Spanish radio discussion in which representatives of the two opposing mainstream political parties who have shared power between them since the end of the Franco regime are having a bit of jovial banter with regard to whats happening in Madrid (sound familiar?). They are basically making fun of the people who are taking part in the protest, describing them in derogatory terms (sound familiar?).

An articulate lady caller then rings in and tells them that the protest is against the entire political establishment, the financial system and the bankers who have organised society in such a way that people are now relinquishing much of the advancements that their parents generation had fought for. She states that the protest consists of people of all ages and all walks of life who are sick of the Tweedledum/Tweedledee political system and the bankers etc who call the shots (Again sound familiar?).

She says rather than making jibes they should be getting worried (Nothing familiar there as obviously Paddy does what hes told whilst most definitely not wearing a tracksuit).

An articulate lady caller then rings in and tells them that the protest is against the entire political establishment, the financial system and the bankers who have organised society in such a way that people are now relinquishing much of the advancements that their parents generation had fought for.

Show me a protest that is for that. Anytime, anywhere.

They are all organised by political interests with sectoral aims in mind in this country. Is it because people only come out for their sectoral aims? I don’t know. 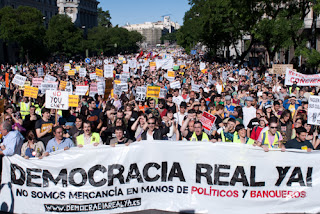 Why did it happen?
Finally it seems the “civil society” as we say here are starting to awake. The slogans are incredibly varied , most of them very catchy, and covers dozens of topics, asking for fundamental changes in Elections Law (asking for open candidate lists, instead the current closed lists that made that even politicians currently waiting for corruption trials are elegible in this weekend Municipal Elections),
to threats à là Icelandic : To haunt and trial the bankers and politicians responsible for the biggest scandals in the recent years, ranging from the sale of millions of ounces of gold to appeals to a fundamental switch in the way of thinking: “Apaga la TV, ponte a pensar” (Turn off TV, start to Think). 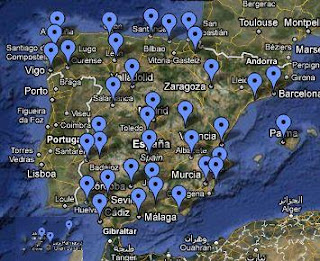 The Stakes Have Been Laid Down
From the complete blackout that the biggest march on 15th was given by all newspapers, TV and in general, official media, to the several debate programs that today are running in every TV channel, this four days have seen a true meaning for everyone. This is not a kid’s game, the Powers That Be are using everything on it: From only showing the typical dawn quarrels between 5 “professional rioters” and the police, in order to make a 20,000 people march appears like an anti-system battle, to mutual accusations from the biggest parties of being the source of the movement to, of course, mine and disgrace “the other”. The significant other, i must say.

It is, and some would say AT LAST, a political movement of young people; it is inclusive, because the great majority of Spaniards are suffering the effects of dysfunctional political and judicial systems; and it does not line up the left in front of the right, but rather the young in front of the old – the latter in this case meaning those who are benefiting from the status quo and whose paternalistic complacency at a time where around 40 percent of young people are unemployed and most of the rest endure exploitative working conditions is finally under attack.

Then there is the fact that corruption is widespread in Spanish politics, but it is hard to hear a politician of any stripe make so plain a statement. Instead, they point to an honorable majority who must not be tarred with the same brush, or cling to the technicality that few are ever convicted of any crime (thanks to the chronic sclerosis in the courts).

The point is not to challenge democracy but to demand better-quality representation. The issues raised by the Real Democracy Now platform are not leftist utopias, but a reminder of how some basic human rights are being abandoned and a demand for an ethical cleansing of Spain’s political system. Nothing to get indignant about.

MADRID—Weekend elections that threaten to drive Spain’s ruling Socialist party from power in several regions and cities also promise a potentially nasty surprise: the revelation of piles of undisclosed debt in local governments that could undercut the country’s drive to avoid an international bailout.

Five months ago, a government change in Spain’s Catalonia region revealed a budget deficit more than twice as big as previously reported. Now, a growing chorus of economists, local politicians and business leaders say that new governments are likely to discover, as Catalonia did, piles of “hidden debt” owed to health clinics and other suppliers.

Economists, analysts and anecdotal reports from companies that suppl