Has that been zapped already?

Edit: it won’t play on firefox but will play on mobile.

Wait until you see today’s pics 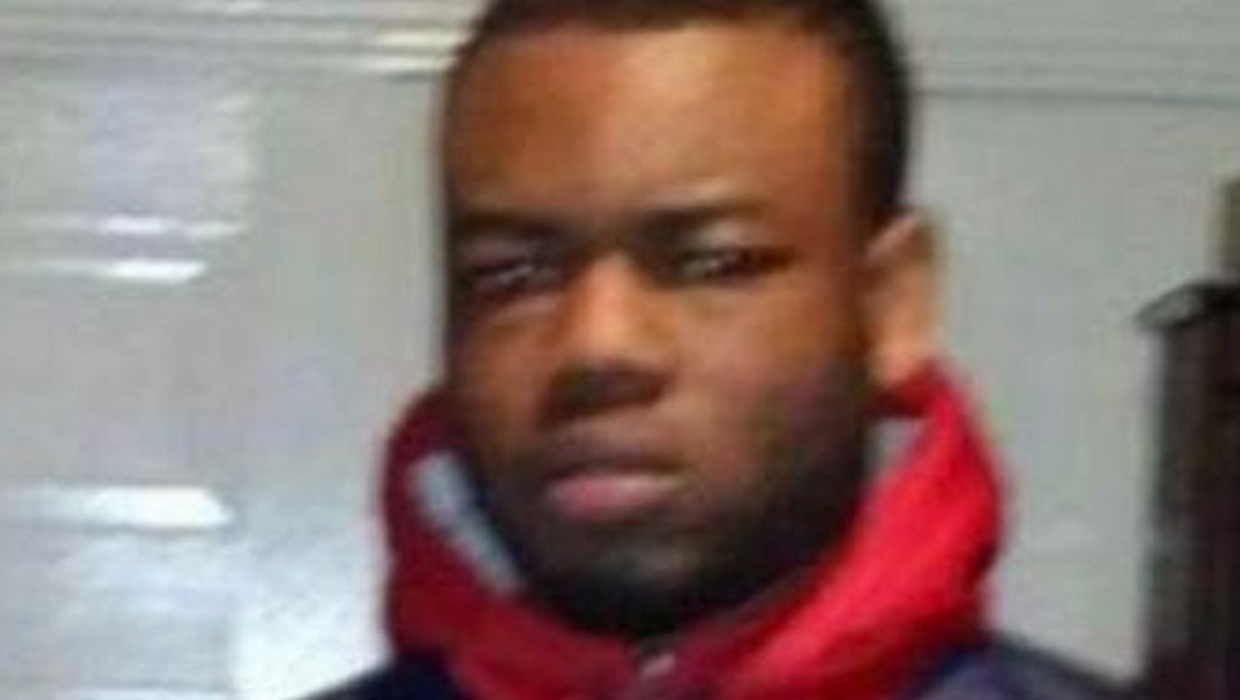 Gardaí are aware of threats being made at a recent rally against the officer who shot dead George Nkencho and are to seek to speak to the man who made the comments.

Clearer footage of what occurred.

And twenty five years ago they were singing about just this in the banlieue of Paris.

Who are the criminals?
Who are the ones we lock up?
At school we impose models
But life has shown me the real side of the sons of bitches who govern us
Not a word on the crimes when the State kills
They oppress you, and if that doesn’t work, they erase you
Bang Bang Bang, that’s how the Police speak
None of us wants to end up like Malek Oussekine
Bing, Bang, the Police are like a gang
From Black Africa to Maghreb, from Corsica to Ireland
The minorities rise up, our blood is from the same stream
That’s why there’s never a strike
I don’t vote, Institutional politics doesn’t interest me
I rap for the low-lifes, not for the clowns
Our asses aren’t for sale, but I’ve got some lead for yours!
The law judges on well defined criteria
80% of prisoners are working class, unemployed or homeless
How many cops are banged up?

Welcome to your new multicultural Ireland. It will be interesting to see just how long it takes for the corpo estates of Dublin to turn into Irelands very own Sarcelle.

Which is that you should never automatically believe a Nigerian. There will always be lies, critical ommissions and misdirections
“I saw my brother get shot ! (true) for doing nothing” (false)

“He had mental health issues” (you got a protection order)

One shouldn’t automatically believe anyone…

The video evidence and the facts that can be verified are sufficient to make a good observation about what has occurred.

The point that was made in the papers about the false information on social media, was the false claims that the Mr. Nkecho had a long list of previous convictions. According to the article, the Gardai confirmed these claims where untrue and that Mr. Nkecho had no convictions prior to this incident.

It’s also clear we do not know the identity of those who spread these false rumours online. So it is impossible to say they are, “fascists and racists”. We don’t know their motives.

Those posting this type of mis-information would be better descibed as “bad actors”.

One shouldn’t automatically believe anyone…

Well. Ireland is a trusting place. And a generally trustworthy people. The Law of Pamela Izevbekhai applies to Nigerians.

I think you can be almost sure that Anti-fa types spread the convictions claim. Which could be found to be false by a quick Google. The facts of George’s life and the day itself were so bad for them they needed to seed some counter propaganda.

What’s really interesting is they’re equating a false claim about convictions with a death threat to a Garda.

I agree, it could have been…(PR people, trolls, state actors…we don’t actually know )

It certainly aims to muddy the waters.

It’s unacceptable in a civil society that “protesters” run around in groups attacking innocent people (as seen in the videos), while at the same time demanding “Justice for George”.

Justice takes time, these groups seem to have been out for vengence.

It’s unacceptable in a civil society that “protesters” run around in groups attacking innocent people (as seen in the videos), while at the same time demanding “Justice for George”.

Justice takes time, these groups seem to have been out for vengence.

Exactly, they do want justice but they are not referring to the Irish system of Justice afaict.

It appears to be Justice as they see it, basically - one of “you” has attacked one of “us” and “you” are now all legitimate targets for revenge attacks. 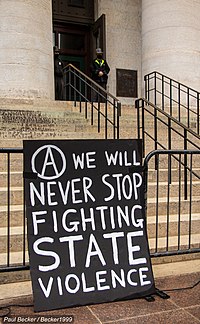 The monopoly on violence or the monopoly of the legitimate use of physical force is a core concept of modern public law, which goes back to French jurist and political philosopher Jean Bodin's 1576 work Les Six livres de la République and English philosopher Thomas Hobbes' 1651 book Leviathan. As the defining conception of the state, it was first described in sociology by Max Weber in his essay Politics as a Vocation (1919). Weber claims that the state is the "only human Gemeinschaft which lay

Saves everyone a lot of time, so they can go about their business.

The older ones are wiser

Imagine if the headline on the paper was: “Race NOT a factor in shooting says Nigerian Community leader, condemns Nigerian violence”

Sunny Kali, a member of the Nigerian Community from Clonee, said that no one in the community condoned the disturbances that followed the shooting. “No one likes the narrative that is now emerging”, he said “People just want answers about what happened”

Why didn’t the Gardai stop George when he was walking back to his house? There were 15 police officers at the scene. I just don’t know why they couldn’t pin him down." Kali added that he did not believe the dead man’s race was a factor in the shooting.

It appears to be Justice as they see it, basically - one of “you” has attacked one of “us” and “you” are now all legitimate targets for revenge attacks.

The concept of the individual actor bound to society via the social contract is derived from enlightenment thinking and pretty much exclusive to European cultures and their derivative societies elsewhere.

The very notion of even wanting to be on your own for any period of time is a foreign one to many, many people in other cultures beyond the western bubble ie in an empty cinema theatre strangers will often decide to sit in the seat right beside you. In such societies practically everything is conceived of at the collective level, beginning at family, neighbourhood, religion, caste etc. A persons entire self worth is derived (often in terms of honour) from their perceived value to the respective collective with which they identify. Many people in wealthy western societies will never have experienced this type of outlook and will naively assume that all newcomers will share their own values and outlook.

Ireland actually stands apart from much of the rest of western Europe in having retained a similar cultural outlook until quite recently through extended family units, religious devotion etc. Travellers still operate within this type of mindset.

The ironic part is that those who have been to the fore in decrying old Ireland as backward and seeking to erase all remnants of its traditions on that basis are generally the very people actively promoting tolerance for such an outlook in others by way of cultural relativism etc. On every level these people engage in intellectual gymnastics and contradict themselves, probably unwittingly in the majority of instances.

Mix all of the above with the type of confused signals that our society sends in the direction of young men generally ie the concept of providing for a traditional family is somehow toxically masculine or for losers etc whereas chasing materialist bling is deemed to be status-attaining, and we’ve clearly got a recipe for disaster for both disaffected young Irish and Africans alike. Remember weve had serious social problems, drug abuse, gang culture in Dublin for decades. Its looking ike now we’ve managed to add ethnic and cultural strife to mix.

Paint by Numbers gang out in force in the media.

No concern much it seems of the virtual and apparent stand down by Garda the next day allowing the mob to go bezerk attacking people and roughing up the neighbourhood… no it’s the usual homily to the lurking social media strawmen, the scurge of our time.

Gardaí are aware of threats being made at a recent rally against the officer who shot dead George Nkencho and are to seek to speak to the man who made the comments.

In addition, An Garda Síochána is “very concerned” by “lies” being circulated widely online by “fascists and racists” falsely stating that the dead man, who had mental health problems, had more than 30 criminal convictions.

In fact the 27-year-old had no criminal convictions at all.

“We are aware of and are closely monitoring social media. We have concerns about escalating racial tensions,” said a well-placed security source.

"On the one hand, there were threats being made against the garda who fired the shots. On the other side, lies are being circulated about the man who died claiming he was a criminal when he was not.

“Unfortunately these lies went viral and lots of right-minded people in society think the dead man was a criminal when he was not. All of these things stoke the fires of racial tension.”

I believe some folks cannot see the embed, here is the direct link for you people:

“Weird” stands for “western, educated, industrialised, rich and democratic”. But this theory as to why Europe advanced raises difficult questions

Henrich thinks that the church’s views on marriage and family life changed everything . He notes that Christianity was, from the middle ages at least, unusually hostile towards marriage between cousins. This produced a profound change in social organisation with sweeping effects on European culture. Kinship, a term that has always fascinated anthropologists, plays a key role in the book: it directs communities inwards, and makes them either apathetic or hostile towards those outside their particular clan.

Henrich argues that the church largely destroyed kinship within Europe between AD1000 and 1500, even as clan-based societies persisted across the rest of the planet. Within Europe, where prohibitions on cousin marriage forced people to marry beyond their families, “weird” culture became more receptive to strangers. Monasteries, universities, trading guilds, courts, stock markets, legislatures, coffee houses, newspapers – along with enterprise, trust and mobility – took root in the soil of “intergroup prosociality” created by the church’s edicts on marriage.Beyond Europe, non-“weird” people shared resources and a strong sense of local community but missed out on the forms of social dynamism and openness that supercharged Europe’s development.

This reviewer takes aim at the author’s depiction of Cousin-marrying, tribal, apathetic, hostile people as having (ahem) less ‘evolved’ cultures etc. Better review in the FT but it is paywalled.

Deploying a battery of studies based on contemporary evidence – surveys of IBM employees in different countries, say, or the unpaid New York parking tickets of UN diplomats – Henrich suggests that corruption, impatience and even aggression are more common in non-“weird” cultures than in western society.

We shouldn’t blame non-“weird” individuals who fetishise revenge or indulge in nepotism, he implies: they’re burdened by centuries of kinship logic that sees little value in transparency and trust beyond one’s clan.

Now that I think of it, the assaults & intimidation on shoppers and commuters are much worse than the killing of George. George had a say in his own death whereas a random shopper is entirely blameless. He was targeted because of his actions. They are targeted because they are lone, law-abiding and Irish.

And as for the brother - there is clearly a lower standard of policing applied to Nigerians than Irish.

It doesn’t specifically mention Polyamory, which always causes instability in a society.