Quite a drop, as with a lot of the big properties, be interesting to see exactly how low they will have to go to sell. If I remember correctly, they paid less than 2 Mil, so they’ve some room to negotiate.

Quite a drop, as with a lot of the big properties, be interesting to see exactly how low they will have to go to sell. If I remember correctly, they paid less than 2 Mil, so they’ve some room to negotiate.

On the Dalkey Riviera - for €25 million

The Russian oligarchs who are swarming all over the French Riviera buying up villas clearly haven’t heard of Dalkey where the views from the best houses rival anything in the Med.

Six-bedroom Monte Alverno set high on Sorrento Road looking out over Killiney Bay has 1.2 acres of Italianate gardens that include a swimming pool, tennis court, rock gardens, woodland and a lookout tower to take in the spectacular views.

It’s on the market at €25 million. Sherry FitzGerald says it’s confident of finding a buyer despite the uncertainty shrouding the Dublin property market in the run up the general election. The stamp duty alone will be €2.2 million. “It’s a very special house,” says selling agent Simon Ensor. “The views are magical and the house faces south unlike many of the coastal homes on this side of the city.”

Sharing a driveway with Van Morrison, Monte Alverno is well protected behind high electronically controlled gates off Sorrento Road, with a second set of gates leading directly into the property. The owner, a businessman with expensive taste in art and furniture, has poured money into the house since he bought it in the early 1990s from socialite Renata Coleman for an estimated €1.5 million.

It’s a highly atmospheric house with the feel of a gentleman’s club - full of soft leather sofas, original oak panelling and Oriental rugs scattered on polished floors. Full-time staff tend the house and grounds which are pristine. The pool, with its dragon motif floor, is filled and ready for summer. There are numerous terraces and lookout points where statues gaze out to sea.

The original Georgian house on the site was given a thorough makeover in 1895 with a new castellated facade and a wealth of Victorian Gothic detail, such as the solid oak panelling and fitted furniture provided by the renowned cabinet makers Strahan of Dublin.

During the War of Independence the house was commandeered by the British Army and the story goes that a British officer was shot in the library. A leather chesterfield sofa has a mottled red finish to intrigue the dinner guests when they are not admiring the exotic plants and koi carp in the large and steamy Victorian-style conservatory built onto an outcrop of Dalkey granite.

A superb double drawingroom has French doors opening onto the terrace where a wide flight of steps lead down to wide lawn overlooking Killiney Bay.

The Goose Room - so called for its seasonal view of migrating geese through more French windows - is a third reception room with lots of space to lounge around the fireplace. Across the hallway is the diningroom, which connects to the conservatory and the kitchen which is relatively modest by today’s standards. Next door, the cellar is not open for viewing.

The main staircase has a high domed ceiling overhead and tall leaded windows throwing a rich, filtered light onto the upstairs landing.

This leads to several large and lofty bedrooms on one side, and to a cosier domain at the other where there is a study and sittingroom, and access to the tower room with windows on all sides and a final flight to the roof where the flag can be raised when owners are at home.

Speaking of Sorrento Road Does anyone know whatever happened with the sale of #1 Sorrento Terrace, it was for sale a few years back, dropped price from 30 Mil to 20 Mil, but then I never heard anything further. Maybe it sold.

Nobody left with that kind of cash to splurge

Amazing how wrong they had it!

Amazing how wrong they had it!

Even being generous and giving a value of 550EUR/sq.ft, the sums puts the “pin” price at EUR4.7m.
Firmly in the 80% drop range…

removed from myhome and the sherryfitz websites has it been sold or withdrawn ???

removed from myhome and the sherryfitz websites has it been sold or withdrawn ???

I’m of the opinion that, had it sold, you would have heard about it !

If it sold, the buyer may have made it a condition that the EA does not publicise the fact. Happens now and again with publicity-shy figures.

Of course the grapevine should eventually flush out the truth - or a colourful version of it.

If it sold, the buyer may have made it a condition that the EA does not publicise the fact. Happens now and again with publicity-shy figures.

Of course the grapevine should eventually flush out the truth - or a colourful version of it.

Owe it to this thread to post… this site has definitely experienced some… mission creep shall we say.

Did nt the original property for sale in 2008 have another house built in the (very large) grounds and subsequently sold? I vaguely remember a very expensive ultra modern house being sold a few years ago.The original 19’th century house remaining unsold for many years. This must be the 19’th century house.

As for the mission creep. What just happened will have even stronger long term economic effects than 2008. Can’t be other wise given the more than doubling of the money supply in the last 18 months. And given how quickly the narrative of the last two years is being buried the last few weeks things should be back to normal in 3 to 6 months. By normal I mean 1973. The last time this happened.

I’m so old I remember the price of a Curly Wurly going from 12p to 20p in less than a year, And they got much smaller two. Both inflation and shrinkflation. Almost half the size. The 1970’s was not just bad hair, bad clothes and disco…

That is the original house that has now sold. The modern monster on the site is still on the market, asking €6.9M for 655 sq.m.

Why do people build ultra modern houses and fill them with old furniture? 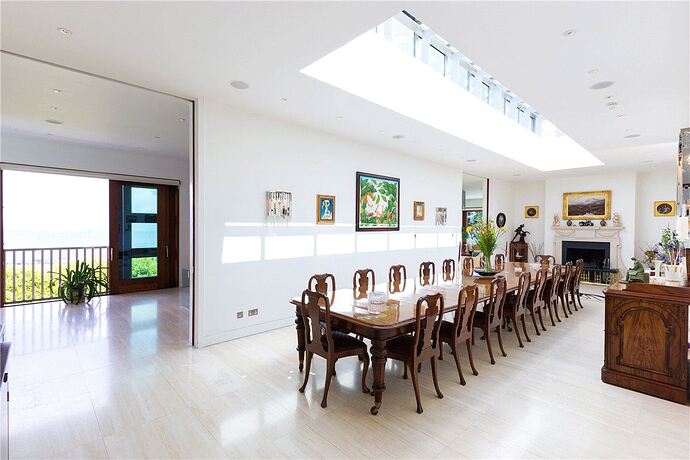