New Zealanders Vs The Menace

JUST IN - New Zealand to enter nationwide lockdown after detecting 1st local case for 170 days: “Do not talk to your neighbors.”

I expected it after Australia’s recent rise. Only 20% full waxed seems v low at this stage

New Zealand's Prime Minister Jacinda Ardern has extended a nationwide lockdown as the number of Covid-19 cases in the country rose and the outbreak widened beyond its largest city, Auckland, to the capital, Wellington.

I missed the moment to post the rumour a couple of days ago, that 3 days was going to be extended to 5 weeks, i.e. let’s see how long the “initial” lasts - but that sure is a contrast to a rather strange looking headline from spook central yesterday:

New Zealand has reported a breakthrough in tracing the source of a Covid-19 outbreak that plunged the nation into lockdown, with Prime Minister Jacinda Ardern saying it should help “stamp out” the virus.

Health officials have been trying to determine how an Auckland man contracted the coronavirus this week, ending a six-month run of no community cases in New Zealand.

Tests showed the man had a version of the Delta strain found in Australia, and Ms Ardern said investigations narrowed down the origin to a person who arrived from Sydney on 7 August.

She said the traveller had been in quarantine and hospital since touching down, indicating the virus had not been in the community as long as initially feared.

“We believe we have uncovered the piece of the puzzle we were looking for,” Ms Ardern told reporters.

She said finding the outbreak’s source also increased the “ability to circle the virus, lock it down and stamp it out”.

Case numbers grew by 11 overnight to a total of 21, she said.

Ms Ardern ordered a three-day national lockdown - New Zealand’s first in 15 months - when the first case emerged on Tuesday, with Auckland and nearby Coromandel facing restrictions for a week.

Here is a weird mis-match between yesterdays coverage and todays from spook central:

Only about 23% of its 5 million people have been fully vaccinated so far, the lowest rate among the 38 members of the Organisation for Economic Co-operation and Development.

Just about 19% of the country’s 5.1 million population has been fully vaccinated so far, the slowest among OECD nations.

If it’s just a case of bad reporting, then, once more another example of how nothing of the figure launched at people day in day out are to be trusted.

I spotted that 4% difference too. Hoping to spend a month in NZ next Summer so mad keen for them to get their vax on so I can go on hols

23-year-old football player, Roy Butler from Waterford was just another victim of the dangerous imbeciles who are setting policy in our nations today. Wishing to travel to Dubai with his friends this November, his death was caused by the coercion and force that is being thrust upon the population by a Godless grouping of wilful murderers and vacuum-headed order-followers. Had the ability to travel unhindered without having to submit to toxic junk not being removed from our society he would still be alive today.

Fake-o-rama… she is a brutally textbook insincere, she has the worse poker face on the planet, and she has that Billy boy gates upside down smile thing going on too, and his trade mark shoo shoo away hand gestures.

NEW - “If you’ve got a vaccine pass, you can do everything. Basically, that’s it,” says Prime Minister Ardern as New Zealand plans to re-open for vaccinated Kiwis.

Except maybe stay healthy or alive long enough to enjoy anything.

Its seems Saint Jacinda is not that popular any more. The NZ Labour Party are changing the leadership election rules in order to give her the heave ho. The front runner to replace her is almost Micheal Martin levels of non-entityness. So I think the Labour Party will be trying hard to lose the next election. With the NP trying just as hard not to win. Like last time. No one wants to have to deal with the aftermath of the current clustf*ck. Its not just COVID her government has fucked up it seems.

Saint Jacinda now has very high negatives with lots of mutterings that she is completely out of her depth and often on the very of sounding totally unhinged.

That video is verging on the verge.

Watching her British counterpart talking about Peppa pig today one could assume the knives are out,either somebody slipped him a Mickey Finn or somebody told him the Queen was no longer with us, the plot thickens.

She’s in a new phase… 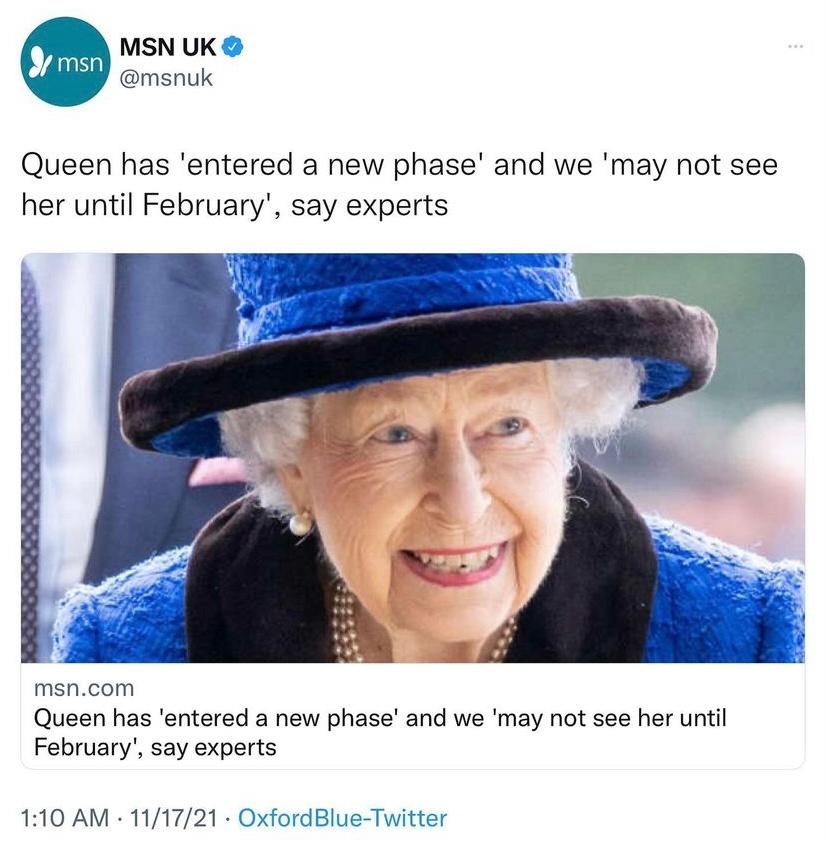 Anyways! On to other London news.

Talk about taking one for the team… 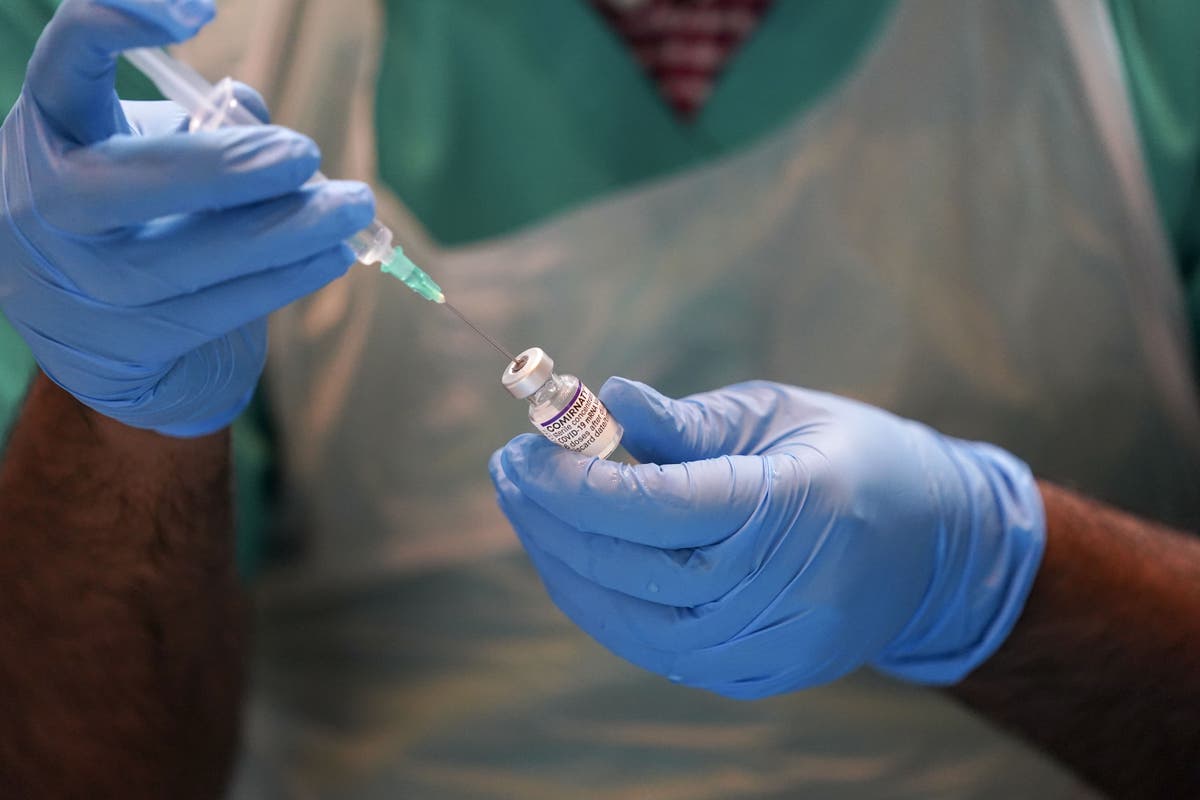 I thought, he just must be Irish, but it’s from New Zealand. Close enough I guess

2021 was the year of inversion in every area. In this one they keep insisting on how “mature” they are when the evidence shows them acting like 14 year olds.

A convoy of trucks and campervans blocked streets near New Zealand's parliament in Wellington today to protest against Covid restrictions and vaccinations, inspired by a similar demonstration in Canada.

Our lot have a lot to be thankful to Lord Frost and the backbenchers for. 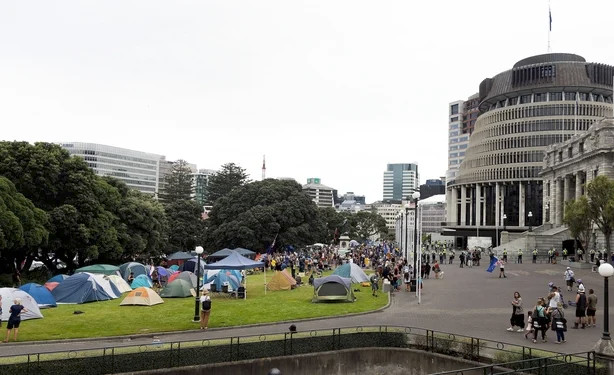 NZ protesters vow to stay 'as long as it takes'

New Zealand anti-vaccine mandate protesters faced off with police outside parliament today, as demonstrators camped inside the Wellington legislature's grounds vowed to stay "as long as it takes". 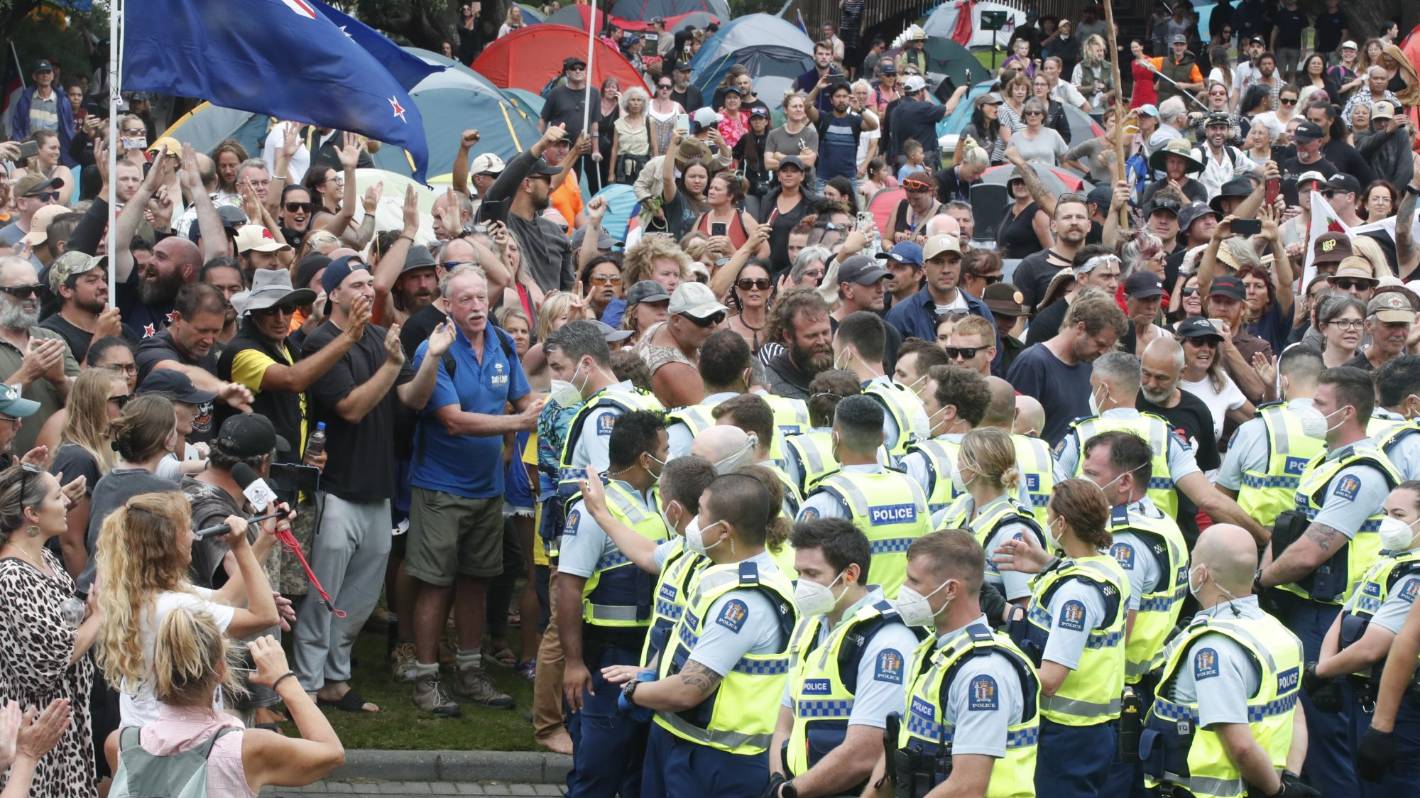 Live: 120 protesters have been arrested and two police officers injured as...

About 120 protesters have been arrested, but the protest could stretch on for days as the stalemate continues outside Parliament.