Was the March (takedown) drop not good enough for ya?

It was ok. I only bought silver shares at the start of the year which are doing remarkably well but I was hoping to get more. They didn’t even really dip down too much in the drop but I did add a tiny bit.
I think there is one more major down leg before the takeoff. The next one really will be the takeoff given the money printing that’s going to take place.
Cumulative gold inflows are at all time highs now. Also, FAANG stocks and TSLA etc reaching all time highs, all while the FED is pulling money from the market at breakneck speed. I think the stock market takes a hit, then the Gold market does a week or two later. Then, that’s the last chance. They start money printing like there’s no tomorrow to win the election and continue to print after it.
I was retaining a sizeable amount of rainy day cash (for me) on the last crash but circumstances now allow me to invest more. 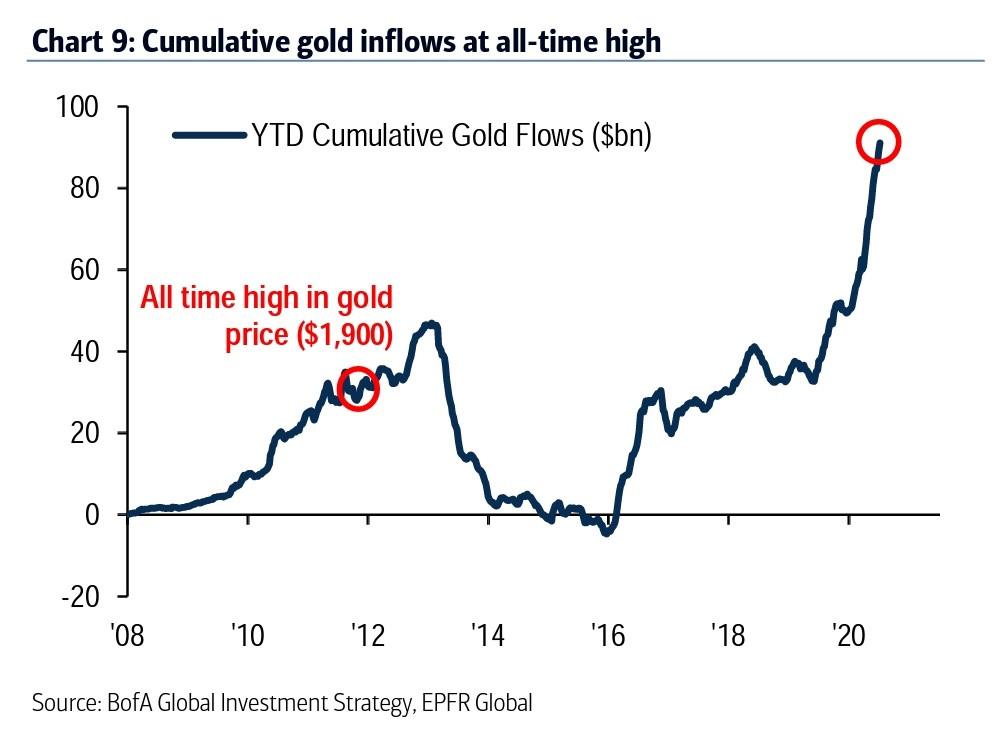 Is this ‘smart money’ coming in or is it late to the party?

Depends on your view on interest rates.

Once they rise, gold tanks.

What is your view on silver?

I don’t believe the fed will be raising rates anytime soon - keep an eye on their balance sheet. So every other central bank is unlikely to raise rates either.
Anyone wanting to get good exposure should look at the miners.

Gold has had a great run over the past year. Gold prices have risen in every single currency on earth and in many currencies gold prices are up well over 30 percent from last summer.

Silver blows past $20 this morning

Silver blows past $20 this morning

Silver & Gold appear to be ramping now in unison as such - what do you think explains the rise the day or so?

Monetary inflation has really taken off lately which might be the proximate catalyst. Hopefully it is nothing worse that happened more recently that I am not aware of yet. I’m not surprised to see this, actually I can’t believe it has taken this long.
M2 Money Stock Federal Reserve

And only an hour or so later it takes out $21

Closing peak of 2011 for GOLD may be broken today if I am not wrong, not inconceivable GOLD could hit $2K within 2/3 days or by next week. Silver has gone over $22.

'Course @EconomicCrashDummy might get their plunge but I’m not so sure… must go look at some old notes, see how accurate my timing has been thus far.

I can not be sure it is going to continue to track but here is what it broadly indicates, in a bit more detail than previous posts - Peaks approx. last Qtr 2021, begins to decline until about march or 1/2qtr 2022, then resumes upward trajectory

If that happens to be anyway accurate, that’s the last chance to get on board before Moon or possibly Mars landing.

Of some note are Pompeo’s ongoing comments with regards China and the CCP, the most recent comments coming yesterday (youtube date) might in part explain the rush to GOLD & other PM’s, as it raises the spectre of growing tensions and potential escalation. Notable was the recent cluster of Chinese, Iranian and US navy ship fires causing debilitating damage to Navy assets.

It’s been awhile but Peter Schiff is ebullient about bullion, silver is the new “bitcoin” and it’s going to the moon!

‘The world is going back to a GOLD STANDARD as the US dollar is about to...

…We’re barely getting started,” the CEO of Euro Pacific said in his podcast. He explained that is also coinciding with what’s happening to the US dollar, because gold is the greenback’s “principle competitor” when it comes to reserve assets.

“The US dollar is about to collapse and when it does, gold is going to take its place. The bottom can drop out of the dollar any day, and gold could go through the roof any day. So, this is a real race and you have to get out of the dollar before it’s too late,” Schiff said.

The yellow metal “will resume its role at the center of the monetary system,” and “the world is going back to a gold standard whether the Federal Reserve wants it or not.”

All this ebullience about bullion is a guaranteed sign of lemmings queuing up for an unexpected drop. The US$ is under a bit of pressure … but about to collapse, and on the word of Russia Today? Yer havin’ a larf. The dollar will turn again, likely in the next few months, and all the goldbugs will get caught in a bull trap of their own making.

I’m very much in favour of Gold/Silver but people should not write off the dollar until they have checked out some of Brent Johnsons interviews. He is the creator of the dollar milkshake theory which states that the dollar would be the last currency to fall and it is likely to rise even with rising Gold value. He believes it will eventually collapse but that this will be after all the other currencies.

This is a good interview (below) as Lyn Alden is strongly trying to pick holes in his argument but it’s done in a very informative and friendly way. If people are fans of Peter Schiff they have probably seen Brent debating him a few times.

Millennial Robinhood investors are piling into silver now so people should be very careful right about now I feel. It seems the Robinhood investments are directly related to the stimulus cheques in the U.S. You can see the increase in investment in silver in the last few weeks from Robinhood accounts. These people are treating investments like social trends. The same with Bitcoin. I know of a couple of females in their 20s that were being mocked by their female friends for not having Bitcoin, so they then bought Bitcoin for thousands of dollars so they could be part of the cool gang (this seems to be very common). I have a feeling it’ll all end in tears and now it’s infecting Gold/Silver. However, central banks are only buying Gold so I think that people would be foolish not to have any.