Seems that the property pin has become less interested in property and has moved to a breeding ground for conspiracy theories and the encouragement of Trump/Farage/Putin style populism - but maybe that’s just the bots talking.

Anyway there used to be a tradition of looking at the past year and forward to the new year in the property market. I think the market is getting very interesting at the moment. The dogmatic refusal of the government to ‘interfere in the market’ has made said market ever more dysfunctional.

On the anecdotal side -

So what is the coming year going to be like -

Probably one of the best summaries of the current situation I’ve read. Well done MM

Very hard to add to that.

Given the election result in the UK, it shows a similar population are happy to keep voting conservative so the FF / FG should our perform the left group to some degree. If anything that suggests more of the same without any major changes to the political climate.

Could be a soft push for a United Ireland given the remain slant however there is all sorts of resistance against that. Would be a game changer for Irish politics if it did happen.

Hard to judge the financial climate - Ireland as a small open economy is heavily driven by the global performance. If that does well it bodes positively for Ireland. If the global economy gets a cold then Ireland gets a flu … maybe. It’s been a long time since the last economic crisis - Lehman’s or Greece. But it looks like all 3 major central banks are happy to print money for the foreseeable. That keeps things good on the same path as the current. 2019 was a record year for some equities.

I’d agree with many parts of metalmike’s summary and would hope that with supply coming on stream, prices will stabilise or fall somewhat in Dublin. Stabilising prices at 2005 levels (as per PS200306’s and TheJackal’s info) is still too expensive for housing for Dublin and its only the central bank rules that are causing that plateau. Demand is still there.

With continuing net migration in the 30,000s, natural increase in the 30,000s also, and household size, I’d guess temporarily stable, at ~2.75 per household following decades of falls, the increased supply may well just be soaked up in maintaining the current prices and rents.

As someone who sees a lot of Dublin and commuter traffic, I can’t see how the situation of 3 hours+ daily in the car is sustainable and this will break people over the next few years (the last crash postponed that societal impact). Until then, prices in Dublin will remain under that pressure and need a commuter mass transit solution to be implemented before price falls can be baked in. No sign of that so I think that Dublin will solidify at the current ridiculous levels, maybe even increase again, and the commuter belt will tick along similarly.

On a macro level beyond population rise, the Europeans are starting to get worried about the age of their infrastructure and I think public investment will start to drive European domestic demand in the 2020s and push economic growth, with additional costs from ‘greening’ it, and this will outstrip any impact of interest rate rises or China/USA trade deals. The ‘Boomers’ have outlived their 1960’s investments and will have to contribute their pensions to the next generation’s roads, bridges, flood defenses, climate change adaptation, hospitals etc. This will be labour cost led investment and will more than compensate for shifting of corporate profits. Richer Europeans will buy more Kerrygold and Irish holidays etc.

Noting that the data for asking prices in the Q4 Daft report indicates that I am already wrong, I advise no one to use this post for informing any financial decision making… 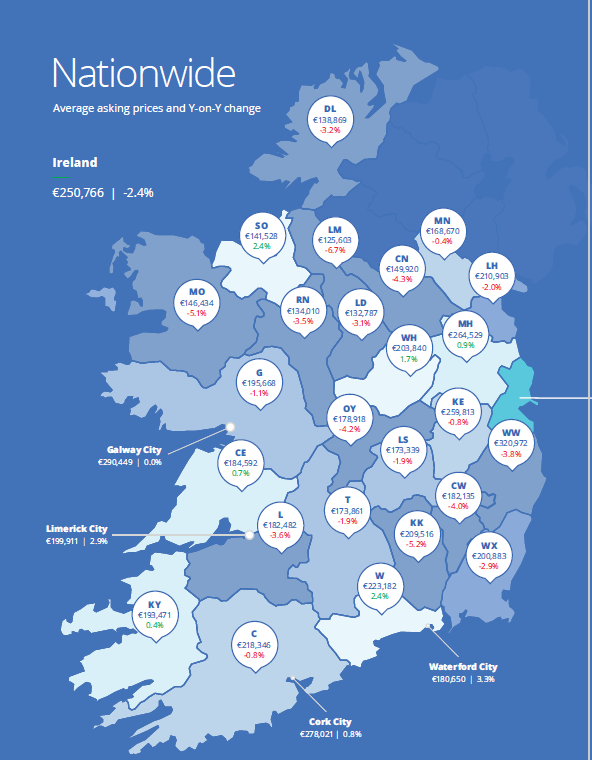 Nationally, I don’t watch the situation but I can’t see much momentum for rises without jobs led demand as we are not in property boom land this time around.

I think we are in for seconds recession,

David McWillams has been posting about “where is the slowdown the forecasters foretasted?” Reading the comments self employed people are finding it harder to get paid.

The brexit fear will cause people to stop spending and start saving leading to a slow down in the service sector.

The manufacturing index is negative two months in a row, only slightly but sill down.

We bailed out the banks to save the German bond holders taking on to much nation debit which we are now paying back. To shore up the banks we encouraged REIT’s to buy up their distressed stock. Now they are buying full developments to rent back. That is a lot of both government and private money leaving our economy. If a tenant pays rent to an Irish LL worst case the money rests in their bank account, its there for the backs to use and they pay tax. With the REIT’s it a black hole where the money leaves our economy. That is bound to have an effect.

I am so looking forward to the next election I think it will be a FF, Lab, Green collation. Lab and Green will win back seats.
FG will get their ass handed to them. Think, Irish Water, Trolleys, Swings and Insurance, Signing on in the Dail, National Broad band plan, he who shall not be named, Cervical Check, Housing, have I missed anything.

If the EU get their way on corporation tax we are fooked, for that reason I don’t think they will.

We bailed out the banks to save the German bond holders taking on to much nation debit which we are now paying back.

The facts don’t match that narrative. We got much of the bank bailout money back. The overwhelming majority of the debt came from refusing to cut spending, including welfare and pension payments, when the economy had shrunk by 20%.

I am so looking forward to the next election I think it will be a FF, Lab, Green collation. Lab and Green will win back seats.

So basically the same people that bankrupted us last time.

Brexit will reduce our exports and it may lead of job losses if tariffs are imposed.

CT for 2019 at record levels again and that’s the big unknown going forward, as it seems to be used to pay for public service overspends each year.

We bailed out the banks to save the German bond holders taking on to much nation debit which we are now paying back.

The facts don’t match that narrative. We got much of the bank bailout money back. The overwhelming majority of the debt came from refusing to cut spending, including welfare and pension payments, when the economy had shrunk by 20%.

According to this IT article the net cost was 41.7bn - do you have a different figure?

Was it worth paying €41.7bn to bail out Irish banks?

For once i was reasonable accurate

I think the point is that the 40-50Bn (not including subtraction of our still unrealised equity in the banks, and yearly dividend), is not a lot of money to have to deal with over 10-20 years.

What has not been addressed at all is the 190-200BN total National Debt. We just scratch away the interest on it, hoping that it’ll all just devalue in the future - and it might - as long as there’s continuous economic growth and the Euro-zone give us cheap money forever. These 2 things will not last indefinitely though. If there’s a dip at all, we are f#cked.
We’ve not paid it down… it hasn’t gone away y’know…ahem.

And as has been said - we are paying for expanded public sector yearly costs, with one-off CT take, and a 10 year continuous economic rise.

Unfortunately, through the vested interests of the media and public sector we are being fed the false narrative for a decade that “it woz de banks that did it.”
And a lot of the public have swallowed it totally.
I think that narrative will be impossible to change substantially, therefore the public sector behaviour won’t change either.
Sure - the banks were terrible, however I’d argue that we as a public sector/ government/ people have been worse.

I fear that we are completely dead in the water the next time if we stumble and trip.

Spot on. Paddy is trained to perfection to give off about ‘de banks’ to this day, allowing what could be called official Ireland, for want of a better term, completely off the hook for the pork barrel of the last decade.

What worries me a bit is how much pension money is tied up in that 200 plus Billion, and risk of future defaults (official or otherwise) on various pension T&Cs.