Interesting backlash from traditional Pride supporters on the commercialisation of the event. In the UK, you’d swear the 2012 Olympics were being held again - the amount of corporate logos changed to the Rainbow Flag is staggering. Just walked out of Law Firm in the City and the lobby area has all changed to celebrate Pride. Pret (chain of sandwich shops) have changed their logo boards outside their stores (must have cost a fortune). Its everywhere.

Is this overdone? What was a protest event against the status quo is now so mainstream RTE were the main sponsor in Ireland. Is the money finding its way to support groups within the community or is it going elsewhere?

Phoenix did an article about pride dublin and the 50k or so profit it makes.

Turns out the demonstration made a loss in 2015 after gay marriage referendum. Then the organisers turned to the big boys for coin.

The pubs needed something to replace arthurs day

It is a joke

What they need is a rich homosexual to pay some group to protest the event, at this point I suspect they would need to import protesters from outside the country

Corporations are seen as so amoral/malevolent that they’re going to jump at the chance at being seen as good.

Gay people earn less, take less maternity leave, don’t need to leave to collect kids, and are generally easier to push around etc which could be another subconscious reason.

On the pride movement itself I suppose I shouldn’t be surprised at how “feminine” an affair it is. You express yourself through your clothing etc, you should be filled with pride just for merely being you, rather than having a burden of achievement as a man must have to avoid being a “loser”. I’m reminded of Camille Paglia’s quote:

A woman simply is, a man must become

to answer the OP yes its overdone,

virtue signalling nonsense for the most part.

I guess a movement gains social acceptance has its first schism and starts reacting against itself then it has probably peaked in popularity.

The future battle grounds will be dietary.

Similar unease about corporate sponsorship of today’s London Pride. That’s in addition to intersectional concerns about LGBT+ feminists, black and ethnic minorities, asylum seekers, “gender diverse” children, etc. Black Pride is on a different day, tomorrow, but with some similar intersectional events for migrants and asylum seekers. Last year there were pro-lesbian protests, don’t know if that will be repeated. Sounds like a fair bit of internecine identitarian politicking going on.

30,000 people to take part in march that critics say has become too commercialised

Last year there were pro-lesbian protests, don’t know if that will be repeated.

It seems the answer is yes. The Grauniad reports this apparently homophobic incident:

Seems there’s more to it. These particular lesbians might have been carrying these placards according to their own admission on this Twitter thread: 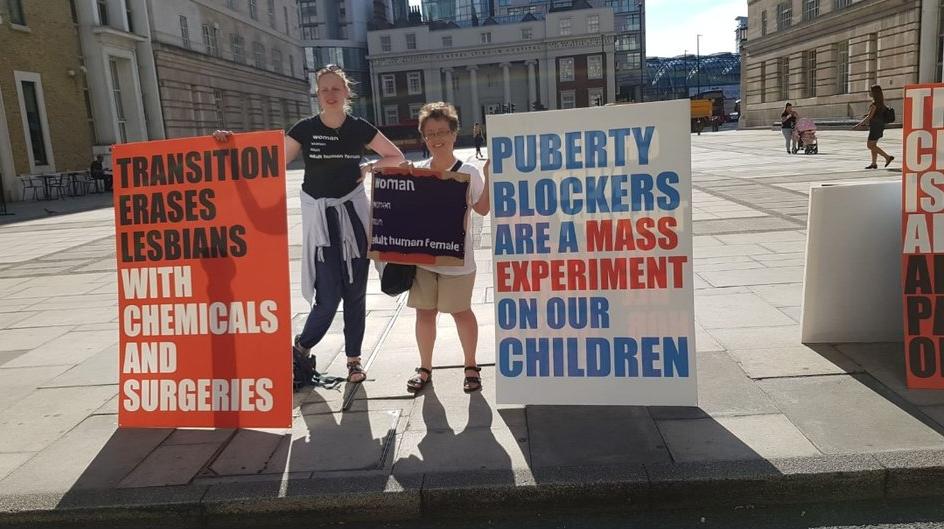 Interesting backlash from traditional Pride supporters on the commercialisation of the event.

I would suggest such criticism implies this event is somewhat or is, sacrosanct (at least to some), thus being analogous to traditional celebrations such as Christmas and Easter, very often criticised for being over-commercialised in places like Ireland and across the west with backlash sometimes manifesting itself where some celebrants put limits on how much they spend on gifts, or Kris Kindling it and so on.

It would not be unreasonable then to claim that such criticism actually equates this with traditional religious observances and festivals.

Perhaps to answer this, you then need to assume that PRIDE is something more than normal, something worth celebrating, not for just a day but now a whole month clustered around the summer solstice no less but something truly incredible, a higher state, maybe even out of this world.

A something so unbelievably worth it that humongous corporates that spend (probably) billions on branding and marketing every year, which their entire reputational value is throughly invested and instilled in, are seemingly happy, nay gung-ho to huddle under the PRIDE rainbow and subjugate their entire BRAND image along with aligned or other competing corporates with something that appears to be well, at least more than just some innocent fun, more than a local festival but a broad set of values, beliefs, political views, ideologies, sexual preferences and sexual activities that appears to not only be in flux but expansionary in the most peculiarly exponentially relative and in some eyes utterly dangerous as the exponential way that seems to now know no bounds, socially, politically, financially, geographically and even spiritually, which I think has not been seen since, well, not slice toast, but since, well I don’t know what actually - Communism?

Maybe we all need to spend more time considering what exactly is this PRIDE thing before testing the validity of at least the first criticism.

PRIDE was and is a protest movement. There is no vagueness about it (well not until recently). Anyone with an appreciation of Stonewall knows this. There is no need to consider it.

The stuff about inclusiveness, celebration, diversity etc. that’s posted about the place by banks, TV stations and large corporates is all a sideshow. The movement was never about adhering to the norms of society or about being accepted by the status quo. Gay people wanted to live their lives as they wanted to without fear of oppression.

That has now been so heavily diluted its become no different to any celebration. That’s my point.

Also, a Martian (with no knowledge of PRIDE) who landed in London and saw the events for themselves over the weekend would be forgiven for thinking it had something to do with the White, Middle Class and Predominantly Male species.

something to do with the White, Middle Class and Predominantly Male species.

I was going to reply but I dont know where to start.
As a 59 yr old father of 3 adult children who consider me moderately old fashioned ,I am appalled at this post on so many levels its hard to know where to start
Gay people earn less, really, any proof.
Generally easier to push around.
I am sure you have surveys and data to back this up.

You express yourself through your clothing etc, you should be filled with pride just for merely being you, rather than having a burden of achievement as a man must have to avoid being a “loser”
I dont know where to start

Why is it widest for some of the highest-paying jobs?

Generally easier to push around.

Damn right. Might be to do with vocal pitch and a hundred things. Remember I said generally

A man finds out why he has a 'gay voice'

Self-conscious about the way he speaks, David Thorpe has explored why some people in his community ‘sound gay’ and others don’t in a new documentary.

You express yourself through your clothing etc, you should be filled with pride just for merely being you, rather than having a burden of achievement as a man must have to avoid being a “loser”
I dont know where to start

I don’t know, maybe start with Camille Paglia, or the bible, or Shakespeare, or Russian novels ? Anywhere you could learn some sense really