RTÉ looks into “Standards in Public Office”. Seems some of our elected representatives haven’t declared assets & interests including property, while others ask “what’s in it for me” when approached by undercover reporters posing as lobbyists for developers.

Manditary Jail Term required, The revenue need to go through his accounts , Personnel, Business family etc…
Barred from ever standing for public office again, the problem being the local Fine Geal gobshites will still vote for him, even though he’s resigned from the party…

The Indo appears to have the juicy stuff:

A county councillor can be heard on tape seeking a Stg£10,000 payment to assist a company with planning permission for a windfarm.

A recording of the Monaghan politician asking for “sterling on the table” is to be aired tonight as part of an ‘RTÉ Investigates’ documentary focusing on the ethical standards of politicians.
He was one of three councillors who agreed to help the undercover reporter with her efforts to secure planning for a fictitious company.
Donegal Independent John O’Donnell was recorded saying he would be paid for this work through another person.
Sligo Fianna Fáil representative Joe Queenan agreed to help, but did not ask for a payment. All three have denied any wrongdoing.
Cllr McElvaney can be heard saying: “You need to sweeten the man up, you know what I mean … You would need to put sterling on the table.”
Asked how much he wanted, he was recorded replying: “Ten grand would be a start.”
He added: “If the money is in the bag, the keener I will be.”
At a subsequent meeting, videotaped using a hidden camera, he said he was “only fooling” about the £10,000, that he didn’t know how much he would want and he would get paid only if the project was a success. “If it is successful for you, I want loads of money,” he said.
Cllr McElvaney last night denied any wrongdoing, claiming he knew it was a “sting” but went along with it

, as he wanted to expose what he described as an RTÉ “dirty tricks campaign” against him. “I had to make it as juicy as possible or there would be no show and I had to make it quite sexy so I answered all her questions to make her interested,” he told the Irish Independent.
Well I believe him.

“It takes nerves of steel to do this. I have certainly incriminated myself but I had to do this to expose RTÉ. That’s the type of man I am. Everyone knows I would never take a bribe.”

What a brilliant defence! He was only going along with this whole thing in order to expose RTE. He was providing a public service - and for free

Obviously he knew it was a sting. That’s why he incriminated himself, let them film him without filming them back, didn’t send a post-stamped letter to himself or the cops setting out what he was doing, or mention anything to anyone beforehand. Because that’s exactly how you’d behave if someone was about to ruin your life.

Great democratic choice we have in this country – you can have your elected representatives as bent as an S-hook, or as thick as a stack of short planks … and sometimes both rolled into one.

Worst thing for me is that I’m not even convinced he’ll be hounded out of his job. We’ll see, I suppose.

I expect the local SF’ers to kick up a fuss, and drive him out, but his ‘loyal support base’ will be the problem

Fine Gael up to the same tricks as Fianna Fail. No difference between them whatsoever.

Great democratic choice we have in this country – you can have your elected representatives as bent as an S-hook, or as thick as a stack of short planks … and sometimes both rolled into one.

All politics is parish pump politics in this country …the last European elections (issues like neutrality, international trade agreements) hijacked by fecking water rates …as long as these people scratching the local itch …drive on!!!

I reckon EI need to add this to their brochure …

“If you have a business proposition with international sales potential or are currently raising investment for your start-up venture, then you may qualify for support and investment” and of course the usual 10 grand cash to “grease” the wheels

Did some work in Africa a few years ago and this used to be put down as ‘PR’ money and was a cost of doing business in these regions. Doubt you could put it down as a legitimate business expense here!

As far as I recall this guy has plenty of previous. There was a prime time prime time 7/8 years ago where a group of Monaghan councillors were mentioned with regard to a rezoning vote on a particular site- cue the programme cutting to pictures of a family of swans paddling serenly around the field in question…

Some ministers forgot to declare property
Minister of State Ann Phelan - Landlord, Brandondale, Graignamanagh, Kilkenny.
Minister Simon Coveney - Landlord, A private home in Dublin which is exempted from disclosure under the heading 4. Land (including property)
irisoifigiuil.ie/currentissues/IR041215.pdf

Leaving the party over the ‘pylon issue’ seems to be a pretty good predictor to date that you are a useless, crooked gombeen.

Hugh was director of elections for FG TD Sean Conlan.
Sean Conlan was one of the “five a side gang”

Supposedly…
There was an anti pylon meeting that Sean was to attend.
Sean was called to a meeting with senior FGers instead. He was asked if he was likely to be charged with assault for a previous fracas. He said it was likely. They instructed him to leave or be pushed.
He was late for the anti pylon meeting where Hugh announced his resignation from FG.
Sean announced his resignation the next morning.

He was charged with assault last Wednesday.
thejournal.ie/sean-conlon-2478445-Dec2015/

Whatever happened to the Moriarty Tribunal anyway?

As far as I recall this guy has plenty of previous. There was a prime time prime time 7/8 years ago where a group of Monaghan councillors were mentioned with regard to a rezoning vote on a particular site- cue the programme cutting to pictures of a family of swans paddling serenly around the field in question…

I was wondering that when I saw his face. I remember being fuming at the time watching that program. He kept referring to him self in the third person “this councilor” etc. He knowing zone a floodplain to build houses on and then it flooded and the HSE (tax payer) was picking up the tab. I recall him smirking at some point during the interview to rub in how he had power and these Dublin City types could FO.

People shouldn’t have voted him back in after the last prime time program FFS. they get what they deserve.

I presume this sort of thing (that he didn’t actually do of course) is a crime? Even in Ireland?

I’m no expert but I think the only crime would be if he didn’t declare it to the revenue as income.

I don’t think not registering your interests is a crime, I don’t know what the punishment for “forgetting” to register your interests actually is though.

A still from a meeting with Councillor McElvaney from tonight’s documentary. Blingtastic! 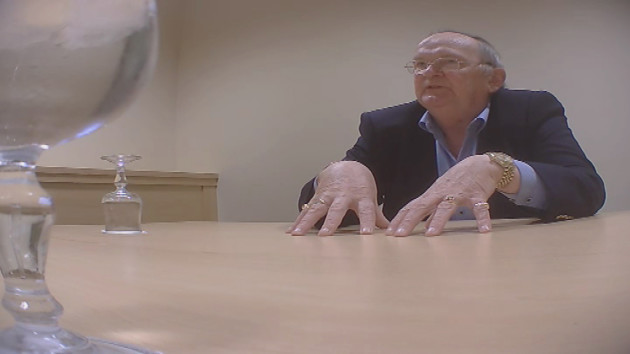 He’s a fianna failer in all but party badge.
He even has the comb over.

He’s a fianna failer in all but party badge.
He even has the comb over.

No, he’s definitely Fine Gael. That party has a strong tradition of this kind of thing. Wait until you hear about the FG Minister Michael Lowry and the Moriarty Tribunal.