Reports US Capitol Building has been "stormed"

Some of it shared by Eric Trump

So it seems the plain-clothes guy who murdered the unarmed Air Force vet in the Capitol in January has been confirmed as Michael Leroy Byrd. The same guy who left his service weapon (which has no safety) in a public bathroom in 2019. That kind of gross negligence is normally an instant termination offense.

So not only was he never named after he murdered someone , unprecedented in such an incident involving law enforcement, but a complete scrub of his online presence including family connections happened immediately afterwards. So at a bare minimum he is Secret Service. This is never done for normal police officers. But one of his job titles was head of security for the House floor which is really not the sort of thing active SS guys do. So with that kind of online scrubbing (it was very thorough) that would point at him being an active TLA guy.

The guy has a history of gross negligence and it looks like there is a family history somewhere in the Capitol Police (same name on the Capitol Police Board about 20 years ago) but the coverup of who he is I suspect is not only to hide his actual employers but to hide the fact that he was using a tactic he had been taught. Killing unarmed protestors.

Also looks like the MSM journalists on the Hill knew the name of who did the shooting very soon after the event but refused to cover the story. As usual.

Is it 'casue I is BlackOps

One year ago, a violent attack on our Capitol made it clear just how fragile the American experiment in democracy really is. Here’s my statement on what the anniversary means, and what we need to do today. 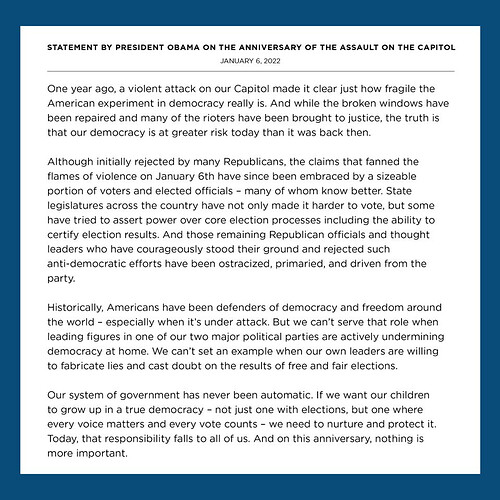 So Obama, please tells us how a larger percentage of blacks supposedly voted for Biden than for you, according to the official voting number from all key (blue) states, even though nationally Trump had the highest percent of black voters since 1960?

Or that in your “home town” of Chicago almost two thirds of the state and federal seats are uncontested, all Democrat, and that Rep party primary candidates have such a high rate of pulling out from the election campaign for “personal reasons”.

So 95% of whites have photo ID and 92% of blacks have photo ID and among voters the number is about the same so how is it “voter suppression” to demand ID proof that the person presenting themselves at the polling station is the person they claim to be? Try getting food stamps, Federal Assistance or Medicare / MedicAid without photo ID, proof of identity or SS card, and see how far you will get.

You can’t love your country only when you win.

You can’t obey the law only when it’s convenient.

You can’t be patriotic when you embrace or enable lies.

Here is the truth: The former president of the United States has created and spread a web of lies about the 2020 election.

He’s done so because he values power over principle. Because his bruised ego matters more to him than our democracy or Constitution.

Last year, for the first time in our history, a president who just lost an election tried to prevent the peaceful transfer of power as a violent mob breached the Capitol.

And on this day of remembrance we must make sure that such an attack never happens again.

You can’t take a shower with your daughter Ashleigh. That’s extremely inappropriate.