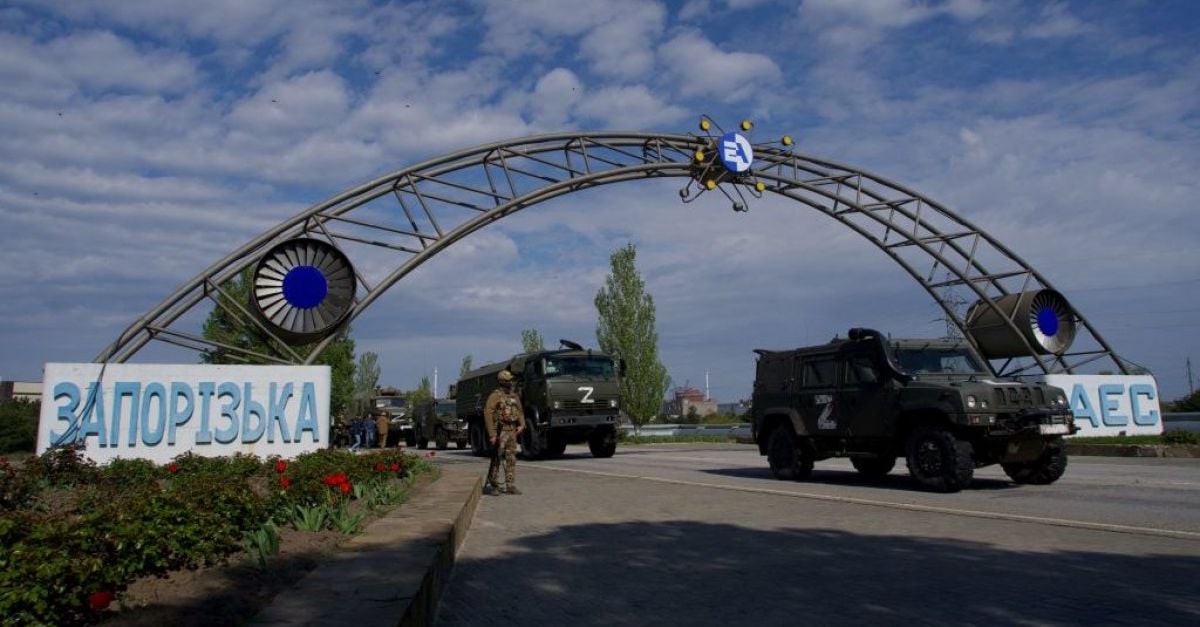 Must be the shortest news story on broken news, so not too many lines to re between.

Ukraine’s Energoatom state nuclear power company said a high-voltage power line at its Zaporizhzhia nuclear power plant had been hit by Russian shelling on Friday, but that the plant still worked, and no radioactive discharges had been detected.

The plant is in Russian-controlled territory.

The statement came shortly after the Russian-installed administration of the occupied Ukrainian city of Enerhodar said power lines at the plant had been damaged by a Ukrainian strike.

There are a lot of pieces to the puzzle to be revealed in all this. I mean it’s only recently been accepted that covid was a man-made virus. 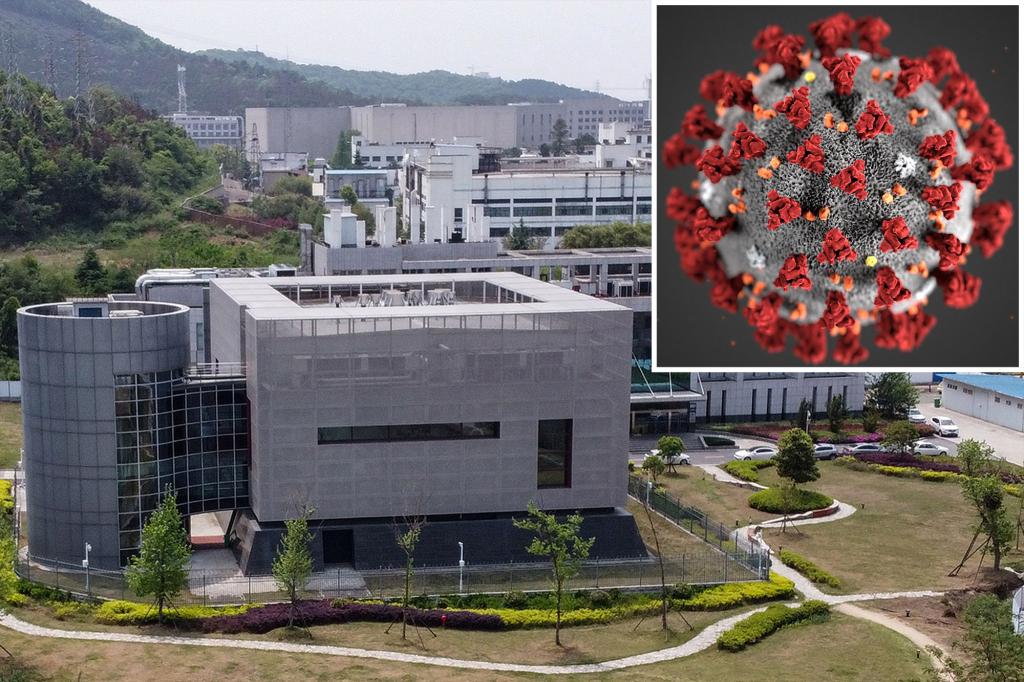 Dr. Steven Quay and Richard Muller pointed to two key pieces of evidence to support the claim in an opinion piece.

We know about Hunter Biden and his involvement in the bio weapon labs in The Ukraine. Equally we know the Chinese operated their own bio weapons lab in Wuhan. It could be a DNC plot, they certainly have form as they showed when they stole the election from the legitimate President of the United States of America, a certain Donald J. Trump. The DNC could rig an election, but I am not sure they could create covid, unless they got help. Enter stage right, Bill Gates, or George Soros?

Explosive! The German newspaper Die Welt publishes extracts from a biography to be published by #Zelensky which reveals “corruption on an industrial scale” and recalls that a film on all this, Offshore 95, was banned from broadcasting at the end of 2021 in Kyiv! 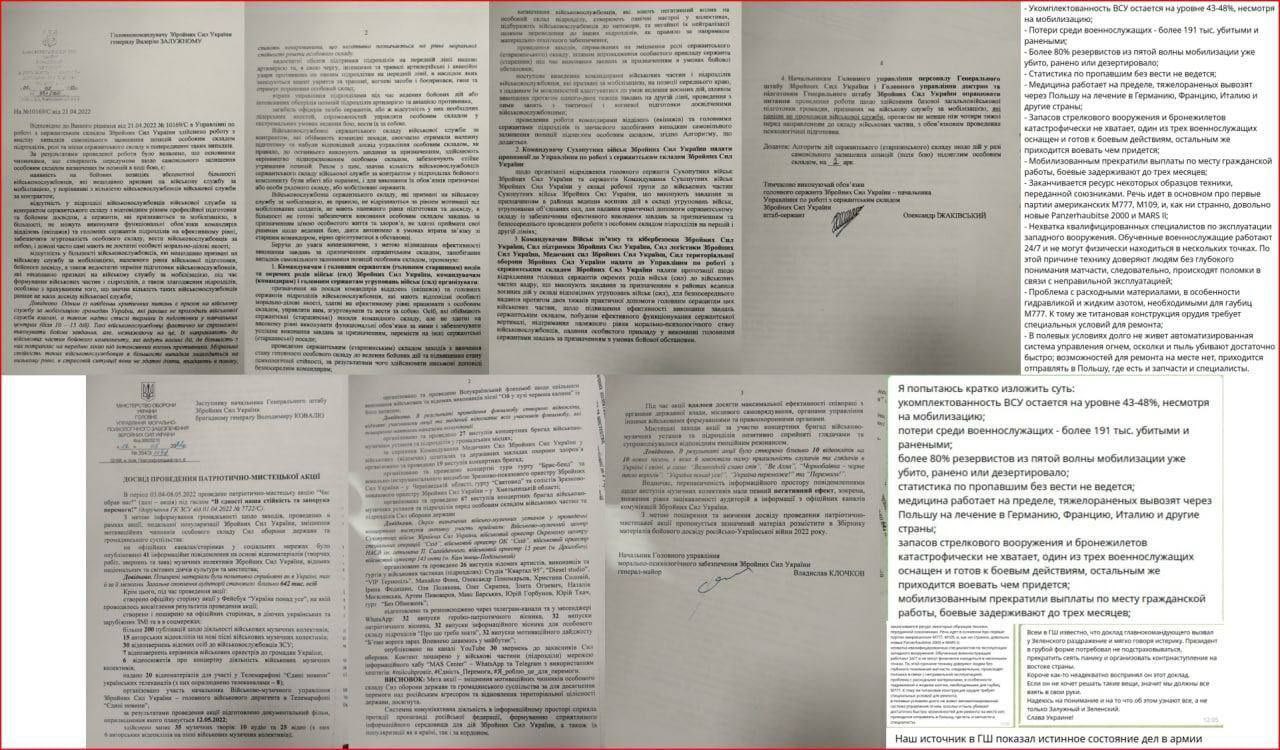 @
These documents have been leaked (deliberately?) by the Ukraine Armed Forces, and seem to be genuine. A huge number of Ukraine eyeballs have been on them via Telegram channels — but no one has seriously disputed their authenticity. What they reveal is horrifying. 1/8

They are going to hang Zel Boy for what he has done.

These documents have been leaked (deliberately?) by the Ukraine Armed Forces, and seem to be genuine. A huge number of Ukraine eyeballs have been on them via Telegram channels — but no one has seriously disputed their authenticity.

What they reveal is horrifying. 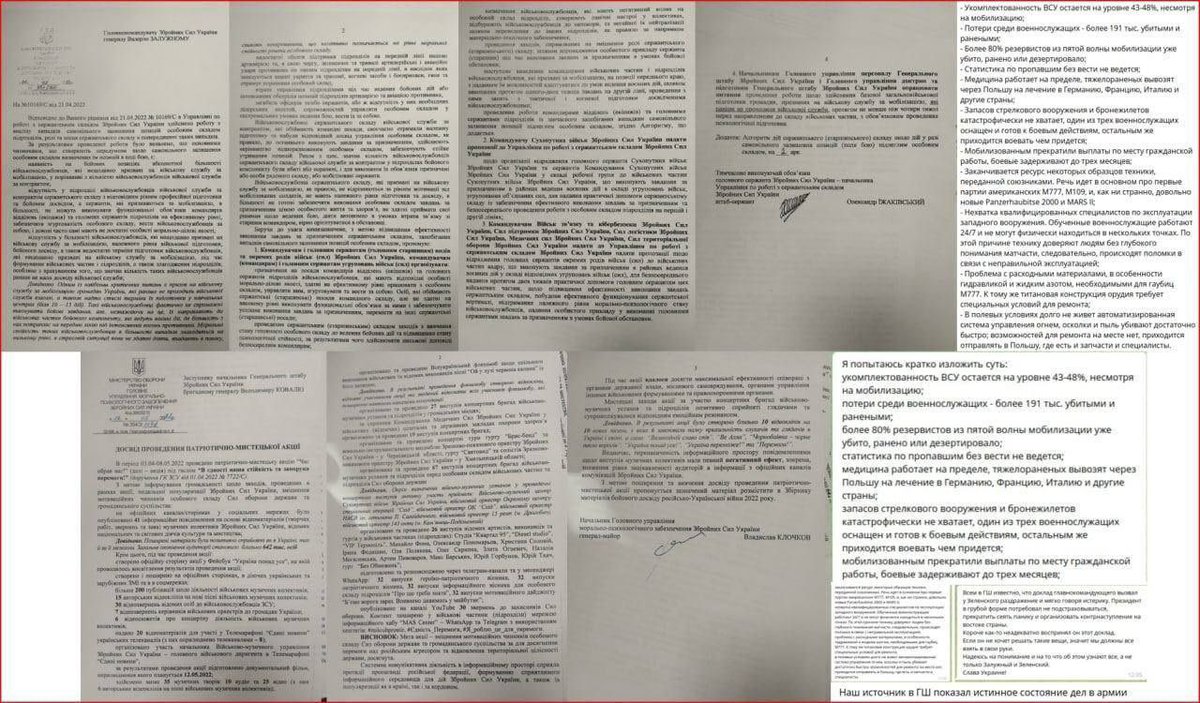 According to these documents, the Ukraine Armed Forces have lost 191,000 men between killed in action and wounded in action. Assuming a 3 to 1 ratio, that would mean 50,000 men have died, and 140,000 are wounded seriously enough to be incapacitated either to fight or to work.

The missing in action are NOT being accounted for. These MIA could be killed in action, prisoners of war held by the Russians, or deserters. It is estimated that they are 50% of that 191,000 number. That is about 95,000 men who are unaccounted for.

Recall that at the start of the war, the Ukraine Armed Forces had 260,000 men, and an additional 340,000 under arms — border patrol, police, Territorial Defense Force (local militias).

The medical facilities are at their breaking point. The seriously wounded are transferred to hospitals in Europe, Poland and Germany apparently.

The Armed Forces of Ukraine are running out of everything in terms of weapons and gear. There is a specific complaint about the M777 howitzers, that they need oil, hydraulic fuel fluid and nitrogen. This would mean that the equipment is not durable enough for extended combat.

In short, these leaked documents — which have been circulating for several days, and have been examined closely by enough Ukrainians that we would know by now if they were fake — lead a disinterested observer to conclude that the Ukraine Armed Forces are about to collapse.

This is a catastrophe for the Ukraine people and nation. These 300,000 men are the flower of this country — and their lives have been thrown away for nothing more than the ego, greed and arrogance of Zelensky, his circle of psychopaths, and their Washington masters. @GonzaloLira1968: These documents have been leaked (deliberately?) by the Ukraine Armed Forces, and seem to be genuine. A huge number of Ukraine eyeballs have been on them via Telegram channels — but no one has seri...…

Anyone paying attention won’t be surprised by any of this.

An entire generation of Ukrainian men have been and are being slaughtered in defence of a false narrative and nothing else (sound familiar?).

The truth is the exact opposite (once again) of that pumped into your living rooms via tv, radio and Twitter.

NATO (the US) will now have been sent packing from Iraq, Afghanistan and Ukraine. All that’s left to decide is whether the neo-cons are crazy enough to go nuclear. Pelosi’s entirely irresponsible jaunt to Taiwan would suggest that they might be.

In southern Ukraine, the Russians having now moved beyond Kherson and (it must be assumed) will now begin to move toward Odessa. Assuming they accomplish this task they will likely have achieved their goals ie they will have won the war for real (it’s already a foregone conclusion).

What happens after that is the real question.

There was a Minsk agreement. There was an agreement back in March agreed at Istanbul - both rejected by the west. As a result any new agreement will likely have its terms dictated by Russia Versaille-style. 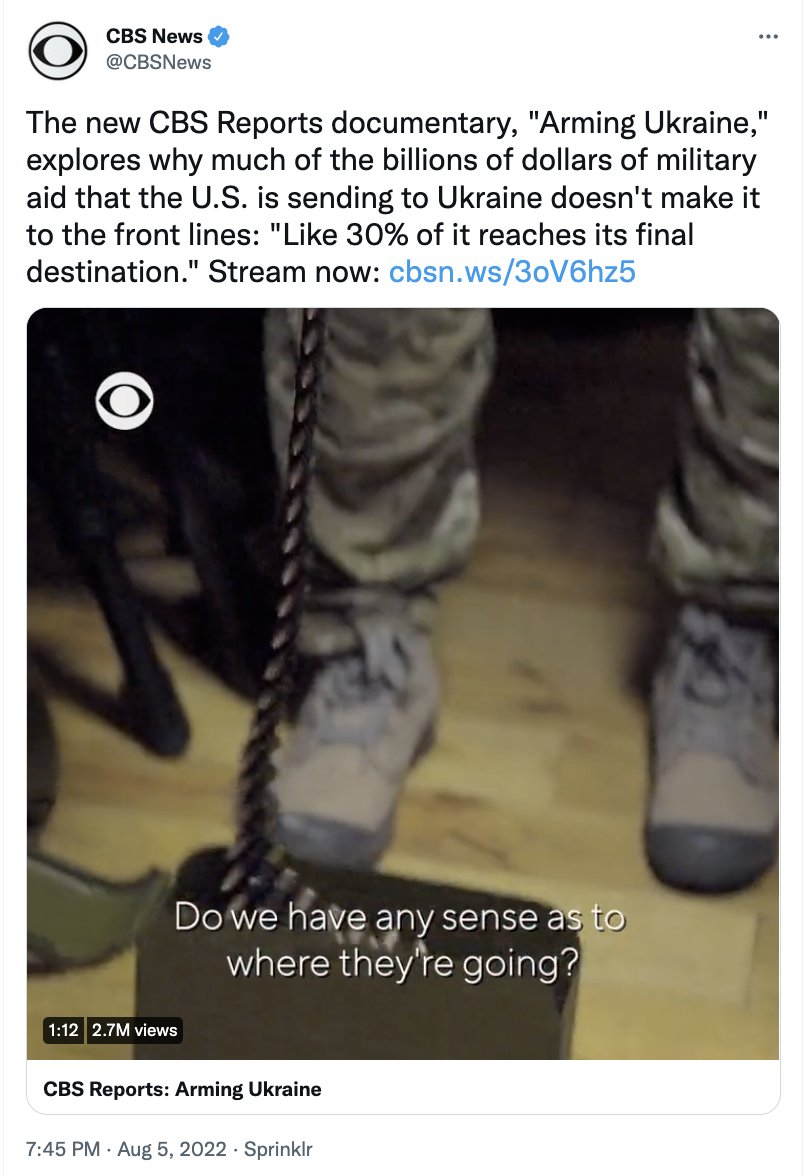 @
We removed a tweet promoting our recent doc, "Arming Ukraine," which quoted the founder of the nonprofit Blue-Yellow, Jonas Ohman's assessment in late April that only around 30% of aid was reaching the front lines in Ukraine.

This tweet from CBS had to be pulled because it’s so embarrassing to the Ukrainian war effort. Only 30% of the military aid being provided by the West actually reaches the front lines. The rest is being trousered by members of the Zelensky regime, the very same people who are sending untrained boys into rocket barrages without any ammo or body armour.

The rest is being trousered by members of the Zelensky regime,

Yes a lot of hardware will end up on the black market, but not all of it, the Russians destroy as much as they can with missile strikes 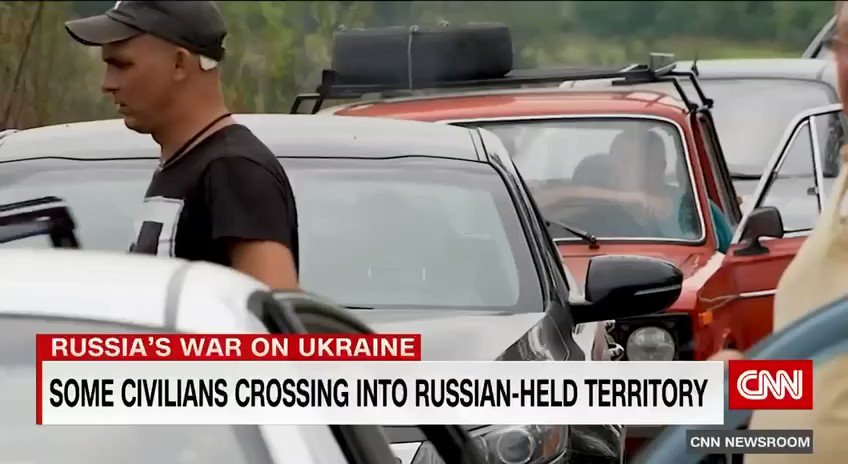 @
I don't know if it's just a case of cognitive dissonance on my part but lately it fells like western outlets are starting to change the tune on Ukraine. Here seen are Ukrainians moving to Kherson.

The people on the ground know which way this war is going. They want to be on the right side when the dust settles.

The people on the ground know which way this war is going. They want to be on the right side when the dust settles.

Its hard to know whats going on in the areas controlled by Russia, the article below says life is difficult for Ukrainian school teachers because of the changes to the curriculum, but the article never says if the teachers are being paid in rubles or hryvnia. I think its rubles, so they all got a pay rise, in winter they will also be paying the Russian price for gas. maybe this is why some are moving to the Russian side 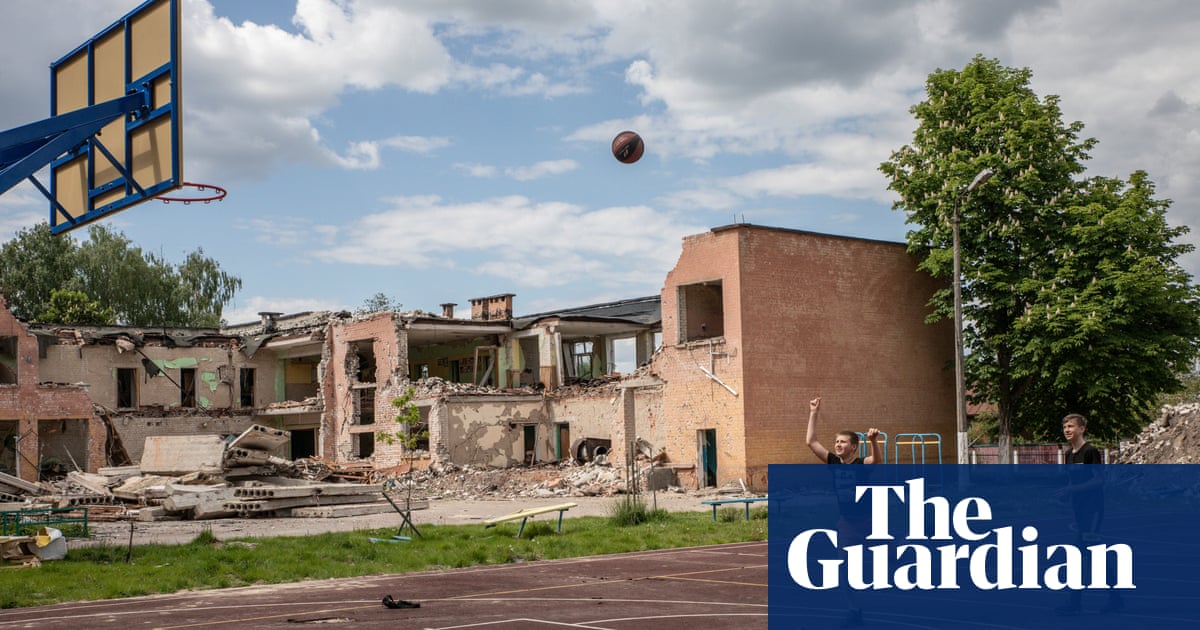 And I have also read that the Russians have cleared all debts in areas they control, a jubilee, disgraceful behavior. how much will they hate Vlad for that move