As in the video of 250+ surrendering I presume.

Lot’s of denials, and “fact checking” going on.

No one outside of Mariupol really knows. 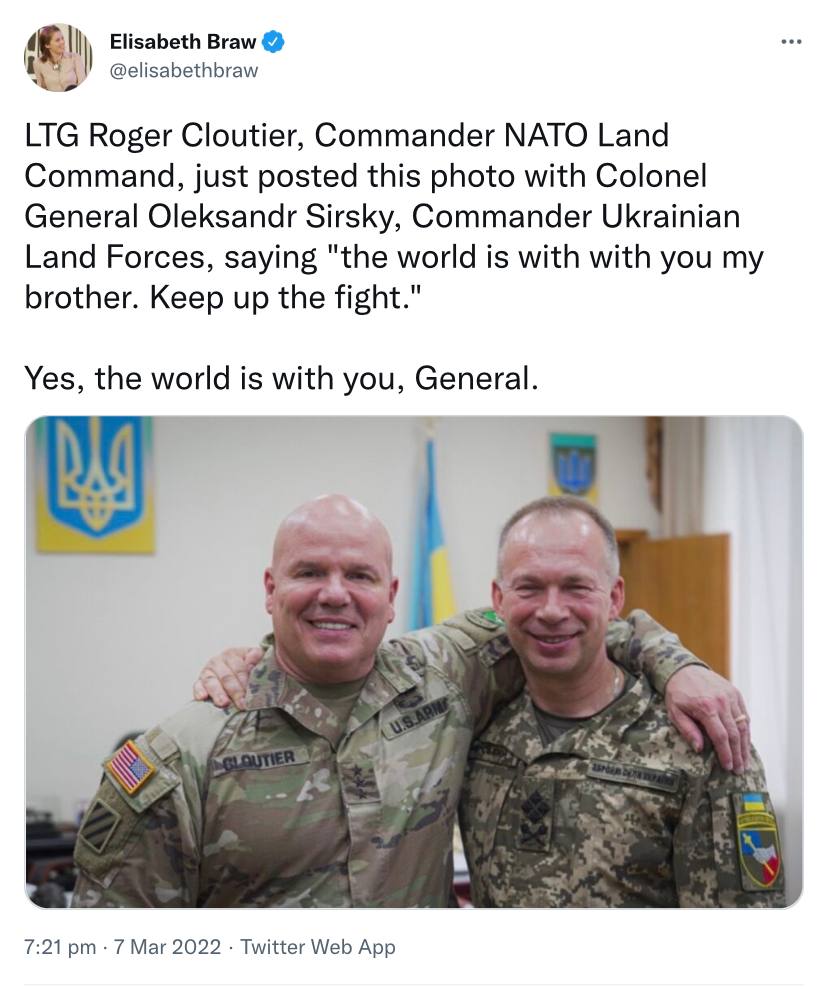 As in the video of 250+ surrendering I presume.

Lot’s of denials, and “fact checking” going on.

No one outside of Mariupol really knows.

You’re referring to sources such as this video below where it’s claimed 200 Ukrainian troops surrendered (there are other videos and photos), and I see @diana has just posted some of the chatter.

Lots and lots of other videos and commentary appears here - https://t.me/intelslava

Yea, who floats a civilian ship toward a warzone?

Yes, I saw the Al Jazeera clip of troops in an ambulance… didn’t share because who knows what is it is not real or staged etc. While it could well happen it’s odd that they got to film it so clearly.

Indian host giving a US spokesperson a grilling.

From March, not the link I had originally you but what I could find. There was a lot on the app at the time iirc, an app called Diia.

So Zelensky’s Ukraine wartime assistance is dependent on people’s ID being digitised and their vaccine status?

Ramzan #Kadyrov published #footage of an “#educational conversation” with #Marines from the 503rd battalion assigned to the 36th Marine Corps of the Ukrainian #Navy who laid down their arms today in #Mariupol.

The Story so far according to…

@StateDeptSpox on Putin’s invasion of Ukraine and conscripting residents of Russia-occupied Crimea: This war is already a strategic failure. In spite of their failure, the Kremlin is doubling down in its brutal and indiscriminate war that it cannot and will not win.

The Kolomoisky monster is probably in custody now. Time to start dancing in the streets.

Putin Feb 10th, after being tortured by Macron for six hours:

These photos have spread wide and far at this stage, you’ve probably seen them already (assume any imagery out of Ukraine is horrifying or disturbing).

You can see from multiple angles that these civilians in Bucha were carrying emergency food rations distributed by Russian forces before the troops withdrew. These victims were almost certainly killed by Ukrainian nationalists for being “saboteurs” who “collaborated” with Russia.

English subs of that previous video (actually 3 videos at this link) makes a big difference if they are accurate:

I slapped English subs on the Chechens speaking to the 503rd. One, bc I love them. Two, they are incredibly easy to translate. 1/3

The Armed Forces of the Russian Federation continue the special military operation in Ukraine.

On the evening of April 4, high-precision, long-range sea-based weapons near Ochakov destroyed a training centre for Ukrainian special operations forces used, among other things, to house foreign mercenaries.

During the night, operational-tactical aviation of the Russian Aerospace Forces hit 134 military assets of Ukraine. Among them: 8 command posts and communication hubs, 1 radar for the S-300 missile system, 1 launcher of Tochka-U missile system, 6 ammunition depots and 2 fuel depots, as well as 85 strong points and areas of Ukrainian military equipment concentration.

According to confirmed information, in Moschun, 23 kilometres north-west of Kiev, on the evening of April 5, servicemen of the 72nd Ukrainian main centre for psychological operations carried out another staged shooting of civilians allegedly killed by violent actions of the Russian Armed Forces for further distribution through the Western media.

Similar events have now been organized by the Ukrainian special services in Sumy, Konotop and other cities.

The explosion of nitric acid at the chemical plant in Rubezhnoye was carried out while considering the direction of the wind and a full understanding of the consequences for the civilian population of Donbas. This is a Ukrainian forces chemical attack. 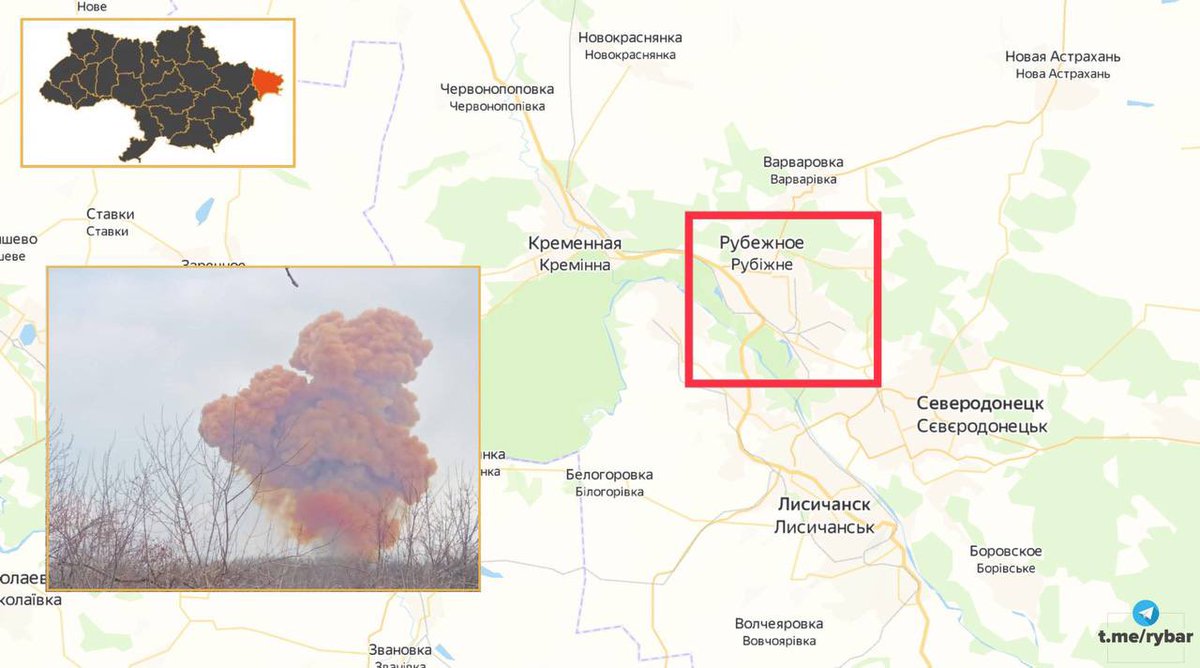 • The Armed Forces of Ukraine exploded the chemical production at the “Zarya” plant.

• Judging by the red tint of the smoke, the nitric acid concentration is above 95%. This is an extremely toxic cloud: teeth, eyes, respiratory system are at high risk.

• The wind goes to Kudryashovka. The toxic cloud will reach the settlement in 2 hours.

To those accusing Ru of it: to harm those whom Ru intervened to protect? To harm civilians, the Ru military personnel? I understand that some people might be damaged by the Western media bombardments, but not to such an extent when critical mind is completely dead. I hope!

Rubezhnoye has been mostly under Russian/Donbass control for two weeks, except its industrial zone located in the southeast of the town, that were under Ukrainian control. The Ukraine forces retreat from the area just today.

The LPR claims of an intentional explosion at “Zarya”, what is indirectly confirmed by the evacuation by the Ukrainian forces of the population from the nearby village Zvanovka tonight, they were quoting “Russia’s chemical provocation” as a pretext for evacuation.

Also, representatives of the People’s Militia of the Republic stated that more than 40 thousand tons of sulfuric, hydrochloric, nitric acid and ammonia remain in the tanks of the enterprise, the explosion of which will destroy all life within a radius of 30 kilometers.

The representative of the People’s Militia of the LPR, Andrei Marochko, said that after the explosion at the “Zarya” plant, the shelling from the Ukrainian side has dramatically intensified what makes any evacuation of the civilians from the town impossible…

… since all the places where people gather are under regular shelling by the Ukrainian artillery.

Locals talk about Azov snipers killing civilians indiscriminately. The place is also in tatters. He also talks ot the lady given gout bread to the hungry locals. Some locals send messages to their far away loved ones.

Here’s a good explanation of the systems of Russian propaganda.
BBC’s Adam Curtis has covered this topic in some of his recent documentaries.
This seems to be a more complete explanation.

More stuff on possible western operatives stuck in Murupol and continued attempts to get them out - Hollywood style.

NATO officers from France, Germany, Britain and “neutral” Sweden got stuck at Azovstal in Mariupol. Right now they are getting in touch with the Russian troops with a request to help them leave, to organize a corridor for the exit. - journalist German Vladimirov.

Two Ukrainian Mi-8 helicopters again tried to evacuate the leadership of the Azov National Battalion from Mariupol, they were shot down - Russian Defense Ministry.

Talks about NATO moves and what countries may do against teh wishes of their population (bypass a vote to join), around 4 mins talks about Frances involvement and operatives being stuck in steel factory, and may be kept as hostages, stories.

Might explain Macrons telephonic adventures with Putin. See what happens.

THIS is going to be THE explosive story of the whole 404 saga, not the Bucha false flag.

Yes, there’s an array of NATO honchos still holed up with the Azov neo-Nazis in the bowels of Azovstal.

Yet the key is what was going on in this underground 8 floors down.

Civilian prisoners of the “Biblioteka” at Mariupol airport said they were constantly threatened to be sent to a pit - from which they would never return.

The “pit” may have been a NATO-run underground bio-lab at Azovstal.

Avostal owner Akhmetov is freaking out.

Bio-military experiments in 404 were carried by Akhmetov’s company Metabiota.

So the real story of the sinister pit" will emerge soon.

This page appeared a few days ago, a still from a video clip 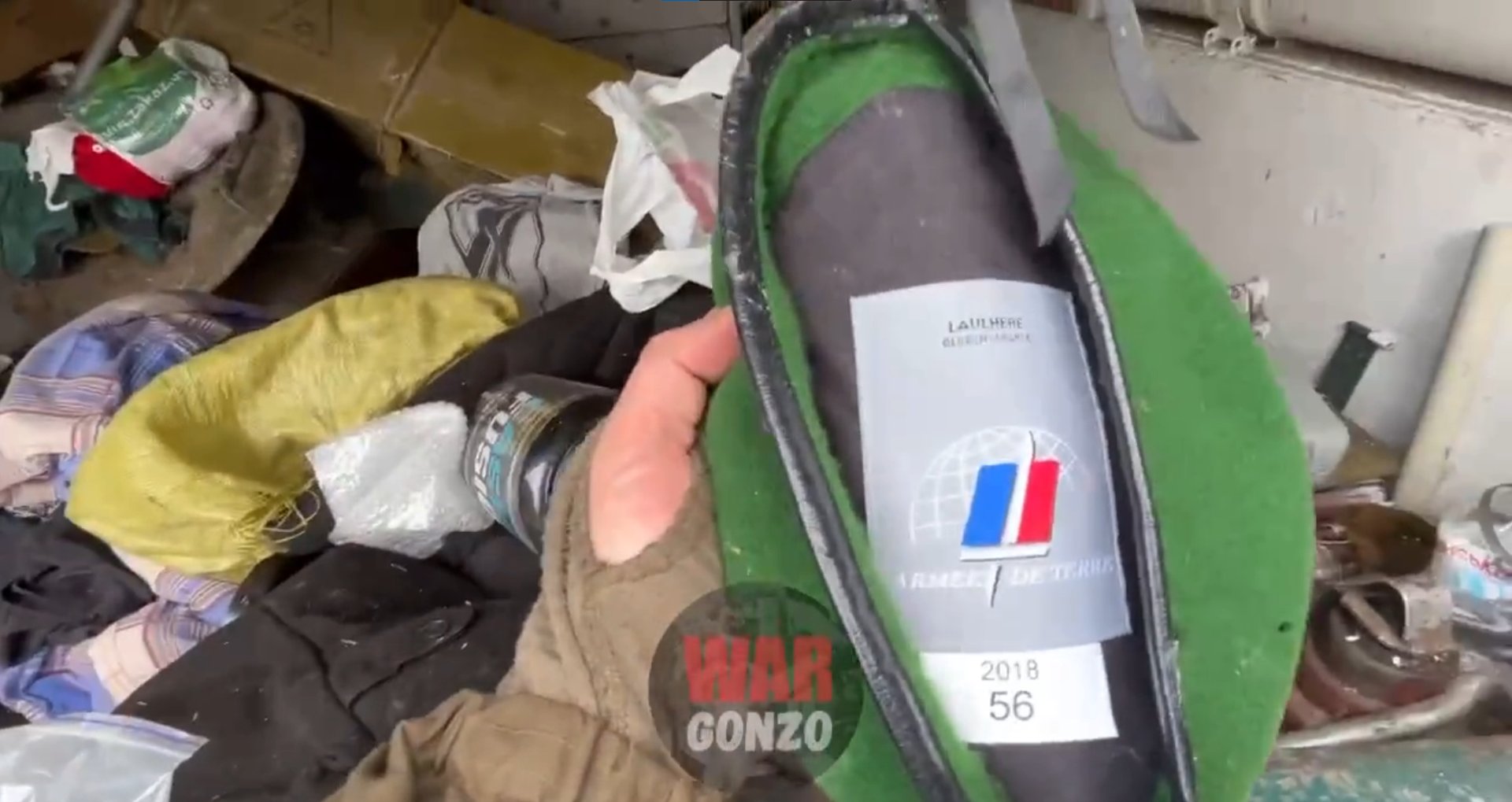 Personal belongings of one of the fighters of “#French Foreign Legion” Beret with personal identification number, found by #Donetsk People’s Republic forces in the abandoned “Azov” equipment near the #Mariupol airport

There had been rumours online, possibly intel slava z, that 2 french intel officers had been killed somewhere.

The Russians shot down two Ukrainian Mi-8 helicopters trying to free Azov forces from the Azovstal plant for the third time, along with Western officials.

A huge thriller has started as Russian journalistic and military sources report that NATO Officers are trapped, including a senior US Officer.

The Russians report that these forces have no way out. So sooner or later they will fall into the hands of the Russian Army…

G translate link with more info in that article and videos: https://warnews247-gr.translate.goog/ektakto-katarripsi-dyo-oukranikon-mi-8-stin-marioupoli-egklovismenos-amerikanos-axiomatikos-i-omada-tou/?_x_tr_sl=auto&_x_tr_tl=en&_x_tr_hl=en-US&_x_tr_pto=wapp

Now chitter chatter claiming the US is dead.

YAVORIV, Ukraine (Reuters) - Ukraine began joint military exercises with U.S. and other NATO troops on Monday, at a time when neighbouring Russia and Belarus have been holding large-scale drills that alarmed the West.

Ukraine, at war with Russia-backed separatists since 2014, has long sought closer integration with Western militaries in the hope of one day joining NATO.

Day 39 of the Russian SMO – a few developments

First, in Hungary, Viktor Orban won a supermajority in the latest elections. This makes perfect sense, as Orban’s policies have guaranteed that Hungary will get her energy at a low and stable price for the next 15 years (if I remember correctly) while the Eurolemmings will get their at astronomic prices on the spot markets which they themselves chose over long term contracts. The same goes for food items, fertilizer, etc.

I want to congratulate the Hungarian people not only on being the smartest in Europe, but for showing and proving that even a nation which is part of the EU and NATO can defend its own national interests.

Now about the Bucha fake, I won’t repeat it all here, I rather simply refer you to these:

I also would like to use this opportunity to point you to the YouTube channel of Patrick Lancaster: https://www.youtube.com/c/PatrickLancasterNewsToday

Unlike Gonzalo Lira who is in Kharkov, Lancaster reports from Mariupol. They have very different styles, but they both deserve the recognition for the crucial work they are doing.

I also noticed that the Chinese channel CGTN has very good correspondent in the Ukraine, although I have heard him only on the Russian-language CGTN chanel. Here is the main one, FYI: https://www.youtube.com/c/cgtn.

That’s a rather funny video for some of the implications.

The distrust of truth… common ya know or any semblance of a curiosity is distrustful ya know, and on that note, to add a good read of similar stock:

Why Propaganda is Vital In Upholding The Illusion of a Democracy

“Whenever the government of the United States shall break up, it will probably be in consequence of a false direction having been given to public opinion. This is the weak point of our defenses, and the part to which the enemies of the system will...