Where is your source that British, French, and Swedish soldiers are holed up in Mariupol?

This is an extremely seriously allegation.

NATO troops on the ground is in Ukraine is a direction provocation to Russia and completely against the stance taken by NATO and its allies.

Roger Cloutier is not a red herring.

Quoted sources on this very thread are talking about him being in Mariupol.

If Roger is on the ground in Mariupol, then people should know.

(The Russians are referring to them as ‘mercenaries’)

I see lots of chitter chatter on the inter natter of NATO homies caught between ze rock and ze hard place in Mariupol.

I posted this fives days ago and it was maybe a few days old as a thing.

Russia, liberating Ukraine from the clutches of the Menace 2022

More stuff on possible western operatives stuck in Murupol and continued attempts to get them out - Hollywood style. Intel Slava Z NATO officers from France, Germany, Britain and “neutral” Sweden got stuck at Azovstal in Mariupol. Right now they are getting in touch with the Russian troops with a request to help them leave, to organize a corridor for the exit. - journalist German Vladimirov. https://twitter.com/DMALAGIGI2/status/1511410389845782532 Two Ukrainian Mi-8 helicopters again t…

I am sorry, that is not definitive enough.

Have you got any actual evidence that NATO has boots on the ground in Mariupol?

If NATO have boots on the ground in Mariupol of all places, this is a direct provocation to Russia. This is a clear red-line for Russia. It is World War 3.

Open Window, are you very confident of your sources?

Are you confident that NATO has boots on the ground in Mariupol, or have they not?

Here’s what I said

“I read about a group of Brit, French and, bizarrely, Swedish soldiers who may be in a large factory in Mariupol which is supposedly surrounded.

No evidence and very hard to know whether any of it, including the maps I linked to above, have any basis in reality.”

And here’s your response -

“Where is your source that British, French, and Swedish soldiers are holed up in Mariupol?

This is an extremely seriously allegation.

NATO troops on the ground is in Ukraine is a direction provocation to Russia and completely against the stance taken by NATO and its allies.”

You’re outing yourself as either a troll or a shill here.

Everyone has provided links to the (multiple) allegations being posted online elsewhere.

If you want to dig further and get definitive cast-iron proof as to whether these reports are true or not, then go to those links, ask the people who run those accounts & originally posted those rumours, or look elsewhere online for other sources or evidence/accounts to triangulate.

For me, I think I will take British or American intelligence. Both of whom were very clear in their warnings that an invasion was imminent, above all others. Both of whom have been most accurate in their assessments of the war so far, they got the invasion date down to a tee”.

I hadn’t seen this post earlier when I replied to your later one.

Perhaps you were drunk at the time, but if you have regard to what I actually posted ie the content to which you were replying above, you will note that I linked to a map provided by British intelligence along with the French version.

As an aside they are almost identical.

If NATO have boots on the ground in Mariupol of all places, this is a direct provocation to Russia.

Would it really be a shock, they have been sending in weapons before Russia invaded, and show no sign of stopping, at some point there had to have been NATO trainers on the ground, I don’t think you need a tinfoil hat to suspect a few got trapped in Mariupol

This is a clear red-line for Russia. It is World War 3.

We seem to be heading in that direction, so far I have only seen one senior European politician calling for a peace deal ASAP, the rest are slowly headed to war. Up to now I assumed most of the people running Europe had some idea how WW1 started, I’m beginning to doubt it now

In the face of Vladimir Putin’s cruelty, Nato must consider taking much tougher options

Have a read of the Guardian, they have gone full on Neocon. a Nuclear war for a country few people knew anything about 3 months ago, and just about the only thing they know now is that the capital is called Kyiv

“I would give them advice: don’t get on helicopters. Better hang out the [white] flag, come to us.” State Duma deputy Adam Delimkhanov in an interview with RT correspondent Vlad Andritsa about NATO instructors stuck in Mariupol at Azovstal: “They co…

"Professor John Mearsheimer is the man who predicted the Ukraine crisis. In a new, must-watch video discussion with the American Committee for US-Russia Accord, he explains why the West’s current strategy is so dangerous.

Mearsheimer begins by noting that “what we have here is a war between the United States and Russia”. Wait, isn’t this a war between Ukraine and Russia? Yes it is, insofar as all the combatants are from those two countries (aside from a few mercenaries and foreign volunteers).

But just because there aren’t US troops on the ground, doesn’t mean that country isn’t deeply involved in the conflict – to the extent that one can speak of a ‘proxy war’ between the US and Russia. The argument is laid out in these two articles by the journalist Aaron Maté, who says “the US provoked Putin’s war”.

Both of Maté’s articles are worth reading in full, but here are some of the most relevant facts:

• Prior to the 2014 Western-backed coup, a phone call was leaked in which two US officials (Victoria Nuland and Geoffrey Pyatt) explicitly discuss whom they’re going to install in the next Ukrainian government.

• In 2019, the RAND Corporation examined options that the US could pursue to “overextend and unbalance” Russia’s economy and armed forces. It concluded that “Providing lethal aid to Ukraine” would yield high benefits by exploiting “Russia’s greatest point of external vulnerability”.

• In January of 2020, the Congressman Adam Schiff openly stated, “The United States aids Ukraine and her people so that we can fight Russia over there, and we don’t have to fight Russia here”.

• In February of 2022, Zelensky’s former national security advisor revealed to Time magazine that Zelensky’s decision in February of last year to shut down three pro-Russian TV stations was “calculated to fit in with the U.S. agenda”.

• In addition to sending billions of dollars of military aid to Ukraine, the US spent years training the country’s armed forces, and has been providing “real time” battlefield intelligence since the conflict began."

“However, the primary outcome will be economic shocks to the weakest which, in turn, will be used to justify greater control to purportedly administer and ‘ameliorate’ these shocks. If food shortages result in rationing, then digital IDs combined with programmable Central Bank Digital Currencies (CBDCs) could be pushed as the most efficient way to administer control over and spending on rationed goods. But don’t take my word for it. BlackRock’s CEO says the invasion of Ukraine could be used to accelerate the use of CBDCs.”

“The only way in which this crazy situation can be sustained is by making sure that, whilst the real economy free falls, there are ways of controlling that free fall…it’s a kind of controlled demolition of the real economy. That’s the way I define it. So, some kind of state control…to make sure that either people don’t realise it or, when they realise it, their reaction is somewhat contained by some form of authoritarianism. We should be quite honest here. We are moving towards a kind of authoritarian type of capitalism, more and more explicit, which I think whose purpose is precisely to try and make sure that the controlled demolition of the real economy takes place in the way they want it to take place. I think central bank digital currencies, insofar as they would enable some kind of monetary slavery, are precisely a step in that direction, although we don’t know yet when or even if it will actually happen. But certainly, they are thinking about eliminating physical cash and replacing it with digital currencies which would allow them to control the monetary flow from top to bottom.”

A discussion of the interplay between war, lockdowns, the financial system and capitalism's need for a constant state of crisis. 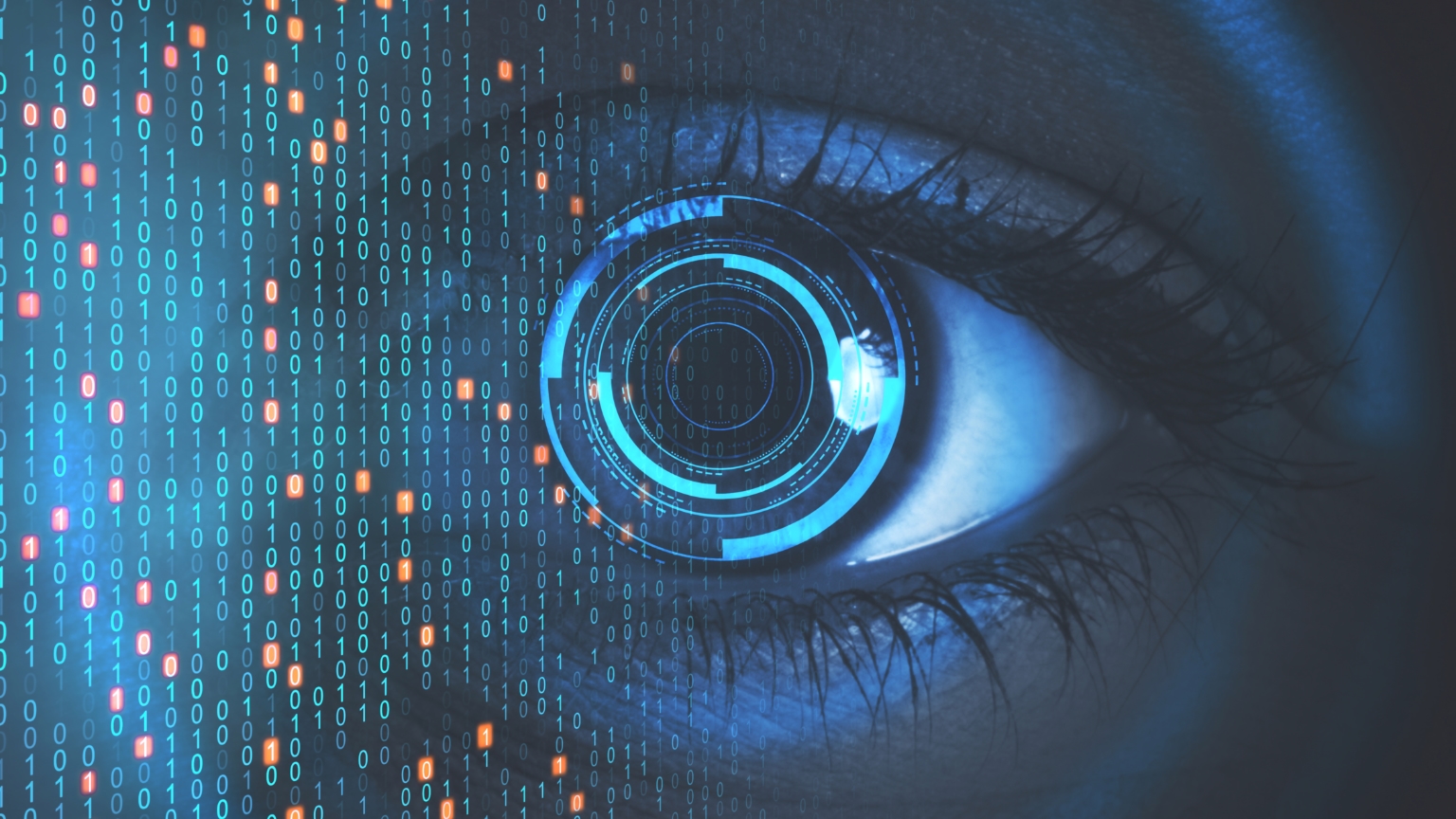 The tech will allow governments and businesses to share data for digital ID checks.

Now my French isn’t great but is the following an acknowledgment of British, and US military presence on the ground in Ukraine since the beginning of the conflict, as confirmed by the French military?

Source is George Malbrunot who google tells me writes for Le Figaro.

I can’t verify Le Figaro as a source but I think I’m right in saying that it’s a mainstream publication.

If correct it would seem to me to be an attempt to get ahead of something that may be about to break in near future.

Have we mentioned the pit yet?

The pit angle was in early chitter chatter and screen grabs of text, therefore not new angle, bubbling until conclusion.

We’re getting more sensational rumours flowing now. Some thinking along lines of unit 731.

"Under the AZOVSTAL industrial zone, owned by oligarch Rinat Akhmetov, the alleged illegitimate son of former Ukrainian President Kuchma, there are 24 km of tunnels up to 30 m deep. 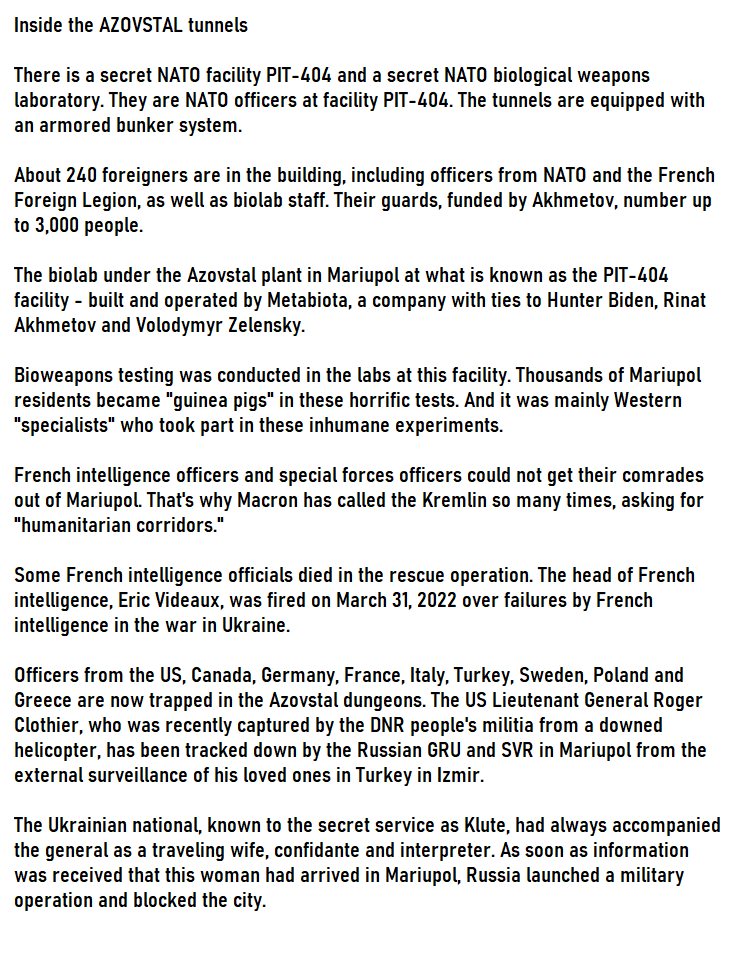 Found what appears to be the original text:

Under the Azovstal industrial zone, owned by oligarch Rinat Akhmetov, there are 24 km of tunnels at a depth of up to 30 meters.

There is also a secret NATO facility PIT-404 – and a secret NATO biological laboratory with biological weapons. At the PIT-404 facility, NATO officers are blocked. The tunnels are equipped with a bunker system with armor protection.

There are about 240 foreigners inside, including officers of NATO and the French Foreign Legion, as well as biolab staff. Their security, funded by Akhmetov, has up to 3,000 people.

The biolab under the Azovstal plant in Mariupol at the so-called PIT-404 facility was built and operated by Metabiota, a company associated with Hunter Biden, Rinat Akhmetov and Vladimir Zelensky.

In the laboratories of this facility, tests were conducted to create bioweapons. Thousands of Mariupol residents have become “guinea pigs” in these terrible trials. And mostly Western “specialists” took part in these inhuman experiments.

Officers from the USA, Canada, Germany, France, Italy, Turkey, Sweden, Poland and Greece are now blocked in the dungeons of Azovstal. American Lieutenant General Roger Clothier, captured by the People’s Militia of the DPR the other day from a downed helicopter, was tracked by the GRU of the General Staff and the SVR of Russia in Mariupol based on the results of external surveillance of his mistress in Turkey in Izmir.

A citizen of Ukraine, known to intelligence as Klute, always accompanied the general as a traveling wife, confidant and translator. As soon as it was reported that this lady had arrived in Mariupol, Russia launched a military operation and blocked the city.

There’s disinfo & propaganda on all sides

Any thoughts or predictions on what you think might happen next?