Looks like fellow pinsters across the pond. San Diego has been hit hard
by their bubble (not as bad as some areas of LA (Riverside)). It’s uncanny the similarities in discussions between there and here.

Brilliant, a similar graph should be created for Dan, Austin et al.

There is one floating around somewhere… was it whizzbang’s work?

Excellent graph. The quotes look remarkably like those that have been appearing in the “What they said, when they said it” forum here .

does this article ( a year back there ) look eeeeeerily familiar

and it comes with a spanking graph, now if we could overlay our fuggin EMPTIES that they dont have 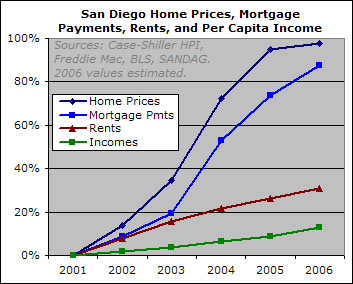 Now if you read that , heeeere’s Austin

The Daft.ie survey provides a very clear picture and some particularly helpful detail on what is a very healthy housing market in Ireland at present. It suggests activity levels in both the purchase and rental sectors remain buoyant as demand and supply continue to grow at far stronger rates than most commentators had expected.

This report introduces the Daft House Price Index. It seems that house purchase demand has strengthened further of late which has prompted an acceleration in Irish house price inflation. The Daft House Price Index suggests that property price inflation is now running at a rate in the mid-teens. This is somewhat faster than many other house price indicators but it is consistent with anecdotal evidence emerging from the market itself of late pointing to notable pick up in demand of late. It is important to note that, the Daft.ie index is an indicator of offered prices rather than sales prices. As market sentiment has improved of late, it is to be expected that prospective sellers would scale up their expectations of what price they could achieve.

The regional breakdown of house price trends suggests that even in a generally buoyant market, variations in local demand and supply growth remain important. Limited supply and the persistence of strong demand mean Dublin house price growth continues to outpace the rest of the country. Galway reflects the same influences, albeit to a slightly less intense degree. A somewhat slower pace of price increases elsewhere reflects the particular strength of new supply in many areas.

The looming maturity of SSIA’s represents a major support for the house purchase market. However the impact on the rental sector is more ambiguous. In general, the flow of SSIA’s through the economy will generate more employment and as a result, more demand for rented accommodation. However, to the extent that maturing SSIA’s are used to fund property investment, the supply of rented accommodation is likely to increase. This would be expected to restrain the pace of increase in rents. Arguably this influence is already in evidence both in the Daft Rent Index and in the rise in time to let and vacancy rates also seen in this report. However the recent trend in these measures also owes much to normal seasonal patterns.

If the pace of increase in rents is more modest than in house prices, it is still the case that the rented market is growing at a healthy pace. The tentative signs of recovery in rents that were highlighted in the Daft Rent Index a year ago continued throughout 2005. It is understandable that record levels of house building are now dampening the pace of rent increase. However the fact that rents are continuing to rise suggests how strong demand is. As a result a broad balance has been established in the rented sector.

Signs of strong and rising house price inflation in the face of another record year for house building underscores just how strong the demand for property is in Ireland. In general terms, this reflects the health of the economy but there are a couple of important factors at work that have ensured the housing market remains notably stronger than most than most other economic sectors.

Ireland’s population profile remains particularly supportive. Numbers in the key 25-34 age grouping are increasing at almost 5 per cent per year. This is in stark contrast to other Euro area countries where numbers in the key household formation age groups are growing by around a quarter of a percent. The recent surge in immigration suggests this divergence will remain a uniquely favourable support for the Irish housing market in coming years. The exceptional trend in demand should also be seen in the context of a still relatively low housing stock in Ireland. The number of dwellings per 1,000 inhabitants at 404 is now 30 below the European average.