Other institutions could follow Anglo Irish Bank and Irish Nationwide Building Society (INBS) into wind-down after the Central Bank completes stress tests on the Irish banking system at the end of this month, according to senior sources involved in the exercise.

Officials have not ruled out further asset and liability transfers between the guaranteed banks as a result of the prudential capital and liquidity assessment reviews (PCAR and PLAR),which must be finished by March 31 to meet deadlines imposed under the EU/IMF bailout.

One informed source said it would be surprising if all the institutions at the start of the process were there at the end.

Early indications from industry sources and the Central Bank suggest none of the four institutions under review - AIB, Bank of Ireland, EBS and Irish Life and Permanent (IL&P) - looks strong, and that all of them will need capital beyond previous estimates.

Kudos to the author, must be a new fellow at the SBP…

Anyone, care to guess which banks will enter wind-down after the stress tests?

Perhaps, EBS ? Is AIB out of the question?

Well it won’t be bank or IL&P, so the process of elimination leaves…

AIB is too big in an Irish context with too many tenticles for a really quick wind down, so I presume EBS is the fall guy this time, as the focus moves on to Residential books. Which have hardly been touched on so far.

Well it won’t be bank or IL&P, so the process of elimination leaves…

AIB is too big in an Irish context with too many tenticles for a really quick wind down, so I presume EBS is the fall guy this time, as the focus moves on to Residential books. Which have hardly been touched on so far.

EBS will be sold first. It has a buyer.

Pick a bank, any bank, they’re all the same!

Oh. That would be bad.

ABOI (Allied Bank of Ireland) or BI (Banking Ireland) anyone?

Seriously, though. Can’t see how we can support these two big retail banks with branches beside or opposite one another.

This is what a greatly reduced banking system means to me.

Something really big has to go. EBS is not big. BOI shut down or merged into AIB, now that’s the big one.

European Union regulators are discussing plans to prevent banks from using so-called hybrid capital to determine the results of this year’s EU stress tests, two people familiar with the negotiations said.
**Regulators could hold banks to a stress test passing grade of 5 percent of core Tier 1 capital excluding hybrid capital, such as junior bonds and preference shares, said the people, who declined to be named because the talks are private.
**“This would give you some slightly random answers,” Simon Gleeson, a financial regulation lawyer at Clifford Chance LLP said in an interview in London today. “What you are doing is penalizing banks for some fund raising decisions they may have made two to three years ago,” he said.

a friend of herself works for one of the big 4 - more mgmt consultant than bean counter and is going to be on a ‘transformational project’ with EBS for next 2 years at least, which makes me believe that a buyer is essentially in place - the interm management would not commit to a project of this magnitude without it - IHMO

Talk about a hostage to fortune.

Enda Kenny’s not going to bother pushing for a reduced interest rate at tomorrow’s EU summit in Brussels, preferring instead to wait until the results of the stress tests are out. It will then be handled by EU finance ministers as the next EU summit is scheduled for June. The thinking is that it’s better to deal with the whole question of sustainability in the round rather than tackle it this week and then have to return to it when we realise the hole in the banks is ‘bigger than 10bn’.

That said, there could be an emergency summit in April to deal with Portugal which looks almost certain to need help very soon. Complicating things there is the probable collapse of the Lisbon govt any day now. Imagine they call elections - which will presumably take at least three weeks - and their spreads soar further, forcing the EU/IMF to step in. Who would negotiate on behalf of Portugal if it only has a caretaker govt? The election would surely lead to a pre-emptive rejection of the kind of deprogramme Ireland/Greece is having to implement.

Still, it looks likely that when they come to design a package for Lisbon they’ll by then know how bad the Irish banking story is and might take the opportunity to reasses Ireland’s situation.

Incidentally, also hearing the the Dutch suggested Ireland could raise VAT instead of corpo tax. Odd suggestion but it’s something we can live with…not least because it’s already in the Programme for Govt! “Okay, okay, we’ll hike VAT (sigh) in return for lower interest, a longer repayment term and the ECB taking a debt-for-equity-stake in our banks. K?”

Meanwhile the Finns are still blocking agreement on increasing the size of the bailout fund (due to domestic political pressures arising from their upcoming election) so no clearcut deal is expected at Thur/Friday’s summit. Y’know, the one slated ages ago as the summit where they’d finally draw a line under this whole debt crisis milarky.

This mess is about to get messier.

Sound of kicked cans clanking down the road.

Sound of kicked cans clanking down the road.

Is that can rolling around a cliff edge?, what is the Irish governments cash burn rate? How long before the next emergency budget?

So the latest is that the Portuguese government has collapsed.

And EU Finance Ministers are to meet to discuss the bank stress tests?
independent.ie/business/iris … 92507.html

Originally it was 10bn but most of us new 35bn. Now there is concern that it is more than the max 35bn figure agreed in the bailout.

50bn is likely the next made up figure but what’s it really?

Does it matter? I mean let’s be honest we can’t pay this back. The Irish Central Bank printing press is smoking, it’s printing so fast.

Can this be fixed, by transferring all banks to control of the ECB, where they should be given they control fiscal policy, the main tool for controlling lending?

Enda Kenny’s not going to bother pushing for a reduced interest rate at tomorrow’s EU summit in Brussels, preferring instead to wait until the results of the stress tests are out. It will then be handled by EU finance ministers as the next EU summit is scheduled for June.

if he concedes on Corporation tax we could have the situation where
a senior member of a political party in this country goes to another country to negotiate a deal for Ireland,
on his return and presenting the deal to the Dail,
the opposition party voice their dissent that we have conceded too much,
while the negotiators argue that it was the best deal we could get.

The central bank has declined to comment in advance of the results, agreed as part of an EU-IMF bailout designed to resolve Ireland’s banking crisis.

The Sunday Business Post said the tests, which measure the strength of the banks’ capital cushion under adverse macroeconomic scenarios, will show potential loan losses of somewhere between 18 billion euros and 23 billion.

Banks are supposed to have their own stress test models for years, under Basel II.

This means they should have their own models already. They should know the bad news. So should the fucking useless regulator.

We should not need to go outside only for the fact that the banks are a bunch of lying fuckers.

The assumption that Blackrock is being handed by the Irish government to work off is a 60% drop from peak.

But, how sound is this assumption?

According to Morgan Kelly

In a presentation that drew several collective intakes of breath, Mr Kelly predicted that house prices would fall by 80 per cent from peak to trough in real terms.

Or, if you look at the extent of our bubble, and acknowledge that in every bust in history, prices return to the mean line, and in fact overshoot it on the way down (and in view of our oversupply, unemployment, lower quality of new builds, etc, this is a certainty), well using the graph below to return to mean in real terms, we are talking a 70% drop - (320-100)/320… and roughly an 80 per cent drop if we get a correction that follows the same profile as every other bust in history. ie. overshoot the mean on the way down. 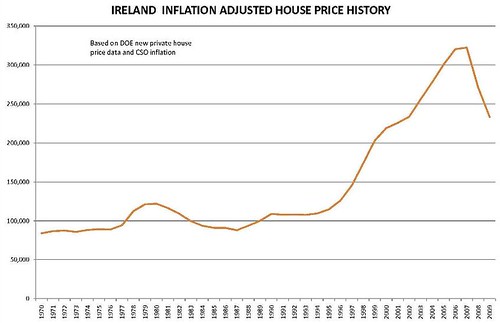 This is merely the second or third last round of extraction of taxpayer monies. Just like all the ones that have preceeded it, we are promised it will be the last. Not likely. Let us take up McWilliams suggestion of examinership or something along those lines.

By Scott Rose
March 30 (Bloomberg) – European Central Bank Executive
Board member Lorenzo Bini Smaghi said the ECB expects Ireland to
stand ready with a “backstop facility” for its banks.
“We expect the government to stand ready with a backstop
facility to reassure markets and creditors that the banks are
viable,” Bini Smaghi told reporters in Moscow today.
Ireland’s government agreed as part of its bailout last
year to set aside a 35 billion-euro fund to cover potential
further losses in its debt-laden banks. Ireland may have to
inject 27.5 billion euros of that amount into the banks
after the results of stress tests are published tomorrow,
according to the median estimate of 10 analysts and economists
surveyed by Bloomberg News.
Ireland has already injected 46.3 billion euros into its
lenders over the past two years, giving it majority control of
four companies, including Allied Irish Banks Plc, Anglo Irish
Bank Corp., EBS Building Society and Irish Nationwide Building
Society.

And now this from market news…

and the national central bank were not available. Although Stark dismissed talk of a new facility as “rumors,” Irish
Prime Minister Enda Kenny told Irish radio on Friday that Ireland was in fact in discussions with the ECB for longer-term financing to help the country’s banking sector restructure and recapitalize over a longer period of time.