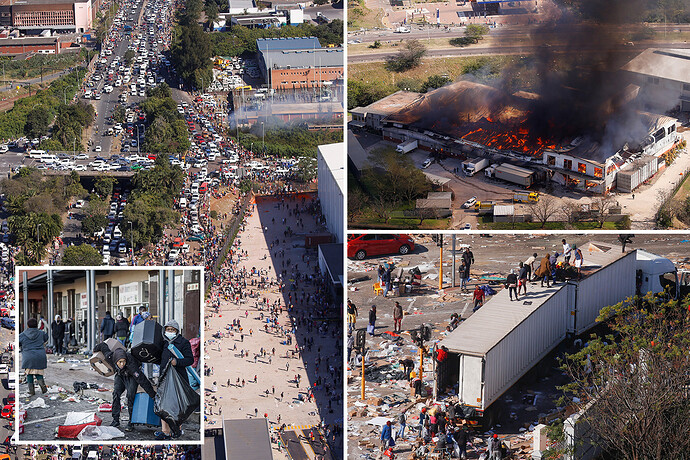 A MOB of looters in South Africa have been pictured ditching cars to load up stolen goods as they ransack containers and stores. Shocking images show hundreds of people running towards a warehouse …

Update: 25,000 troops being deployed. Reserves called up. But what will be the rules of engagement ? 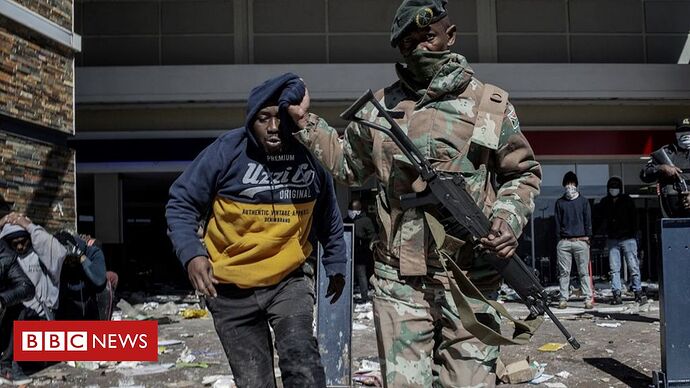 Days of widespread violence and looting prompt the biggest deployment since the end of apartheid.

South Africa only has 50,000 active and reserve. And this is just two cities. I assume reservists in those two areas will be reluctant

The South African Army is the ground warfare branch of the South African National Defence Force. Its roots can be traced to its formation after the Union of South Africa was created in 1910. The South African military evolved within the tradition of frontier warfare fought by Boer Commando (militia) forces, reinforced by the Afrikaners' historical distrust of large standing armies. It then fought as part of the wider British effort in both World War I and World War II, but afterwards was cut o...

I just hope the protests are mostly peaceful, its what George would have wanted

CAUGHT ON VIDEO: Politician Telling People “Go Into Indian and White Neighborhoods; Kill Them and Burn their houses down” in South Africa 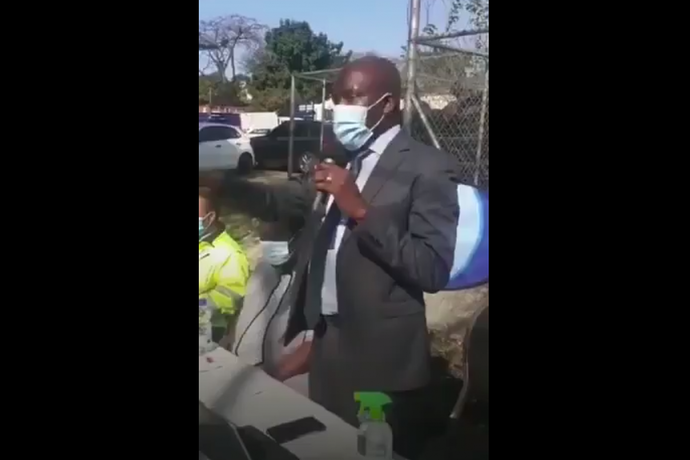 Astonishing video is out showing a South African government official telling Blacks to go into Indian and White neighborhoods, Kill them and burn...

Its a ANC guy. ANC hates Inidans. Unless its the Guptas. What kicked off in Durban and the townships looks like purely an ANC internal battle. Lots of planning went into it. Outside of KZN and Gauteng, Zuma territory, almost nothing happened. 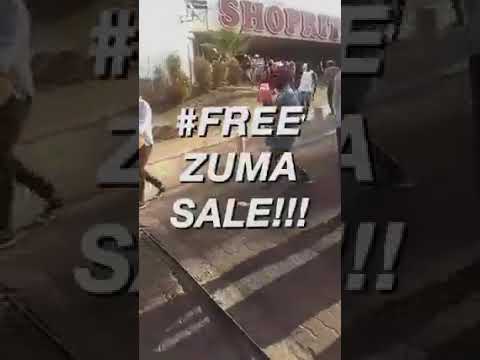 Now this is how you deal with looters… 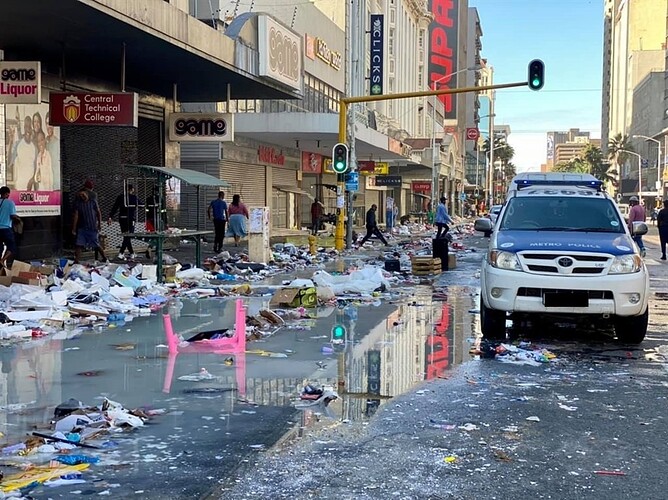 Sooner or later South Africa will be like other impoverished countries such as Burundi, Ethiopia and Rwanda.

COMPLETE SOCIETAL COLLAPSE IN SOUTH AFRICA - RIOTERS BEING SHOT DEAD BY ARMED CITIZENS AFTER POLICE PULL-BACK; LOOTERS BEING WHIPPED IN THE STREETS 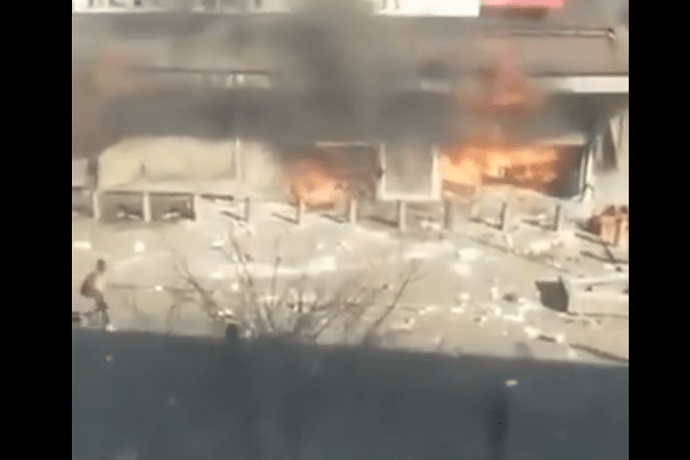 South Africa is in the midst of total societal collapse as roving bands of rioters, smash, loot, and burn businesses in the city of Durban. ...

Very disturbing detailed description of what happened in Durban. 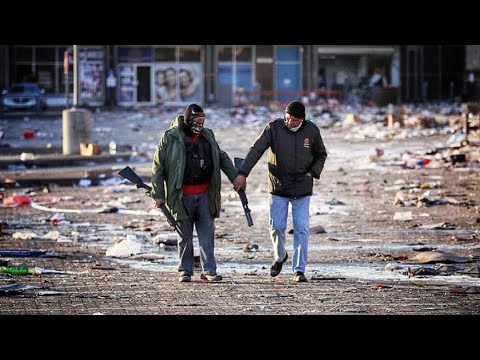 So all the police stations in the Durban area were hit first by Zumas guys in MRAPs with AK47’s.Then large numbers of heavily armed guys went to key warehouses, factories and told the security guys they would be shot if they interfered. Factory security outnumbered and outgunned. Food distribution for the whole country was targeted. Conveys of vehicles stripping food warehouses for Zuma supporters before they were torched. Basic infrastructure like cell phone towers etc destroyed. This is not riots as usual, that is first stage of a planned civil war by Zuma, with Malema as the wing man.

The move of everyone to Cape Provence from Transvaal, Orange Free State will accelerate. For those who cannot emigrate. Still no news of one of my best friends uncle and family in Durban. He is pre 1994 SADF so they should be OK.

Some people I know in Durban have the good fortune to live between a Muslim community which has multiple levels of defence ending with heavily armed inhabitants, and an intact shopping centre with a security team that didn’t run away. The residents in the complex take shifts to watch the perimeter, especially the gate.

A not so intact one…

Hard to disagree, it looks like only the timeline is open to debate, would anyone bet against the ANC winning the next election. most people know that Zuma was totally corrupt, google tells me he has a net worth of $20million, not bad for a communist from very humble beginnings. Cyril Ramaphosa has an estimated net worth of $450 million, for some reason the western media never talk about this 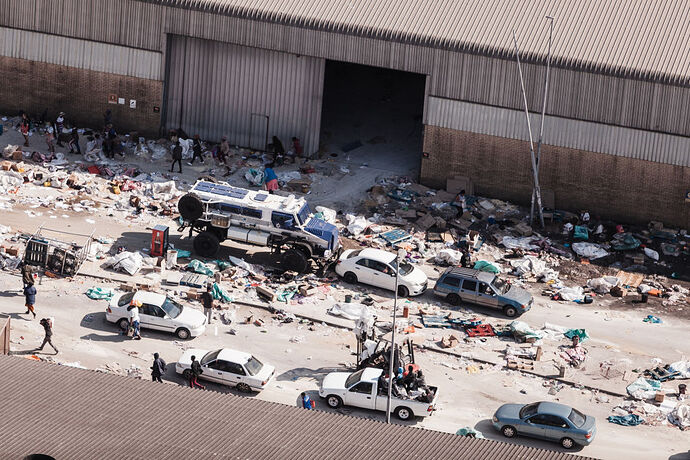 Why Violence and Looting Have Exploded Across South Africa

The explosion of looting and destruction which has overtaken South Africa has left the government of President Cyril Ramaphosa shaken and dazed, its credibility and legitimacy undermined. Ramaphosa’s broadcasts to the nation, appealing for calm, full...

What kept SA together so long was the fact that it was not a two tribe country like Rhodesia. There was no dominant tribe like the Shona. The real disaster of Zuma was that until his rise to power the Zulu, the larges tribe, tended to keep the ANC at arms length. Which is why Natal tended to be the least worst governed province outside Cape Province. Until Zuma cam along. Outside some big urban islands both the Transvaal and Orange Free State had started slipping away long ago due to the utter corruption and ineptitude of the ANC. Which is why pretty much all industry and business not physicality connects to the Jo’burg area has moved to Cape Province in the last 10 / 15 years.

The other thing is the catastrophic mismanagement the SA economy by the ANC. Because of ANC corruption South Africa missed the single biggest mining boom in history. If the ANC had even been able to keep economic growth rates at pre 1994 level’s the average South African would by now have an income at least double what they currently have. They would be at low end Eastern European income levels. Instead its basically greater Lagos region income levels with what is left of far better infrastructure. Which they inherited from the previous regime.

By the time this is over I expect SA to have dissolved to it pre Union configuration. With Cape Provence being fairly functional. Natal maybe. And all the rest going the full Zimbabwe. I fear Johannesburg will go the full Algeria before this is over.

For some reason I was thinking of some video I saw of Ian Smith as an old man in his 80’s tending his garden in a suburb of Salisbury. Just him and his gardener. Not needing any security or protection. As by this stage Mugabe had totally collapsed the economy and parts of the country were already in famine. Because most of his fellow countrymen by now had realized that the “cure” was far far worse than the “disease” ever was.

What was so striking to me was just how different it looked from LA after the riots in 1992. The pattern of damage was very different. There was actually more widespread looting in LA in '92 but very few retail outlets were torched and almost no industrial building were damaged. Even though some of the worst rioting in LA was surround by industrial areas.

This was very well organized by Zuma. He deserves the death penalty for what he did.

The level of damage in Durban is staggering. Large parts of the industrial infrastructure were targeted. What was also noticeable was the complete absence of police and army in Durban and that fact that armed neighborhood protection roadblock were everywhere. It was very different in LA. The place was flooded with police and army during and after the riots.

In fact the only time I have seen anything this is after natural disasters when the police are busy and the roadblocks are there to send a message to any outsiders who might think of doing a little opportunistic looting. A bunch of idiot meth heads were caught this way during the Big Basin fire last year.

Watching the video gave me a bad feeling. It reminded me a bit too much of the early days of the mass killings in and around Bulawayo in the early to mid 1980’s. When Muagabe first showed his true colors as a mass murderer.

This is the next generation of the ANC, keep in mind that these are university students, the best educated and most intelligent the country has to offer. Wakanda is on the way, yeah real soon now LOL 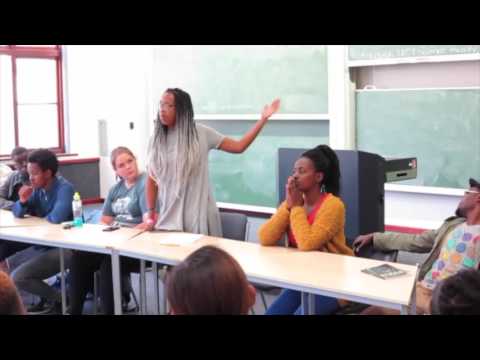 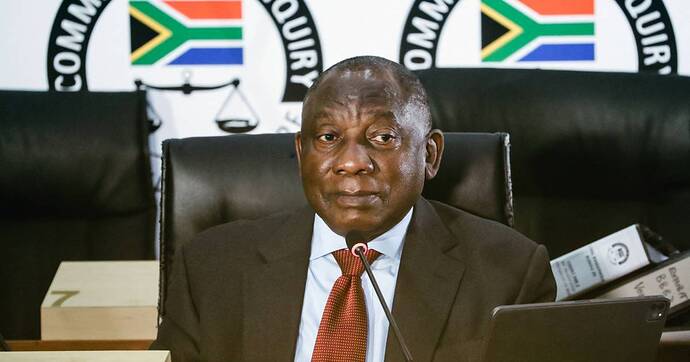 Those in the country are now warning that the country is a tinderbox at risk of wide-scale unrest or even something similar to the revolutions seen in 2011 across the Arab world.

“One of these days it’s going to happen to us, you can’t have so many people unemployed and poor, one day it is going to trigger an uprising,” former president Thabo Mbeki said in late July. “That’s how that massive uprising happened in Tunisia, the problems were brewing beneath the surface and it needed a little spark.”
His language has been echoed by opposition leader Julius Malema.
“The violence that is going to happen in South Africa is because the elite is disappearing and the poor are becoming … poorer,” he told the BBC’s Hardtalk programme a week later. “There’s going to be something that looks like an Arab Spring. That, we are guaranteed.”
He said such a movement would target white people and “black elites”. The MP, known for extreme views, has twice been convicted of hate speech.
While the idea of an Arab Spring-style uprising is questionable in South Africa, the government is clearly worried.
Last week, the army put hundreds of soldiers on standby amid fears of more violence.
A leaked internal memo said the country was “gradually deteriorating into unrest due to criminality that is taking place with the borders”.

Others are moving to wealthier and whiter parts of the country in the Western Cape which they see as being safer – a phenomenon known as “semigrating”.
But one thing they cannot escape is corruption, the issue at the heart of South Africa’s problems.

Most lay the blame at the feet of former president Jacob Zuma, who was in power from 2009 to 2018.
His network of government loyalists undermined South Africa’s tax collection service, bankrupted the massive rail network and national airline, and sabotaged the state electricity corporation.

“It is extremely worrying, and reminiscent of some of the worst times of the early 1990’s when there was a different enemy,” said Peter Harris, one of the lawyers who managed South Africa’s first democratic elections in 1994 and a key figure in the country’s transition.
“It is outrageous that this is going on 27 years into our democracy.”