State of Planning in Ireland at a new low?

An Bord Pleanála has had a terrible year so far

not sure if we have been covering this story

Planning permission for Galway ring road to be quashed

Permission for an 18-kilometre ring road through Galway city is to be quashed.

Is this not your job to know these things?

the board say it was not aware that the climate plan had been adopted four days before it granted permission.

From the article:
"When the final decision was made, on 8 November, An Bord Pleanála said the adoption of the climate plan had not been communicated to it.

The plan sets out the manner in which a 51% cut in carbon emissions can be achieved by 2030.

In this regard, it identifies “a modal shift to transport modes with lower energy consumption”, such as increased public and active travel."

So they do not see any room for the road in the climate plan? A ‘modal shift’ can include going from car to bus or petrol/diesel to electric/hybrid.

The pure pig headedness of the greens will be their downfall. What a shame, Galway really needs this and Dublin really needs regional cities to be able to take the pressure off.

All the more reason when the population is increasing so much and artificially at that. Pointing that last bit out is vitally important because it links with planning for expansion. We have a deliberate expansion of our population with a deliberate cap on infrastructure and housing.

The chair of An Bord Pleanála, Dave Walsh, is to take early retirement, citing "personal and family reasons". 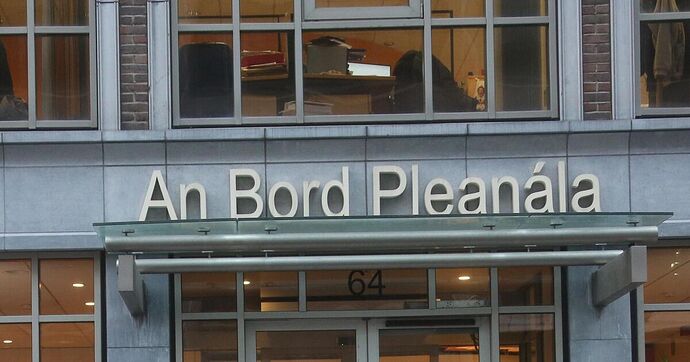 he state planning authority has now been reduced to just four operational board members, from a normal complement of 10, following the decision by chairman Dave Walsh to step away

From several years ago: I know a single mid 40s woman, no kids, low paid part time job in a house share in Dublin.

Parents have land, gave her some. Couldn’t get planning permission.

She would have lived next to ageing Parents and looked after them part time. Now she takes up space in dublin in a rental crisis.

Not convinced this is the best outcome for her, her parents, society or anyone.