Swedish Prime Minister claims that the integration of migrants, failed

Swedish Prime Minister claims that the integration of migrants has failed

Sweden has failed to integrate the huge number of immigrants it has received in the last two decades, leading to parallel societies and gang violence, Prime Minister Magdalena Andersson said on Thursday as she launched a series of initiatives to fight organized crime, Reuters reported.

Many Swedes were shocked earlier this month after more than 100 police officers were injured in violent riots. Violence erupted after a Swedish-Danish politician burned the Qur’an at a rally and tried to hold it in several immigrant-dominated neighborhoods.

Andersson blamed the criminals and said that both Islamism and right-wing extremism were allowed to develop in Sweden, in unusually honest and self-critical comments, writes Reuters.

"Segregation is allowed to go so far as to have parallel societies in Sweden. We live in the same country, but in completely different realities, ”Andersson told a news conference.

The number of people born abroad in Sweden has doubled to 2 million in the last two decades, or a fifth of the population. Social Democrats Magdalene Andersson has been in power 28 of the last 40 years, including the last eight.

Andersson said she wants to introduce local youth crime committees in which social services and police could co-operate. She also suggested tools to ensure that young people stay in schools and off the streets without parental consent.

“Integration was too weak at the same time as we had large immigration. “Society was too weak, resources for police and social services were too weak,” she said.

Sweden, which is holding general elections later this year, has radically tightened its immigration policy since receiving more people per capita during the 2015 migration crisis than any other EU country. It now has one of the bloc’s most restrictive policies.

The human rights organization Amnesty International is critical of Sweden’s tightening of policy, arguing that it causes human suffering and makes integration even more difficult for immigrants.

Regarding Sweden’s accession to NATO, Andersson said the referendum was a “bad idea”. “I don’t think that’s an appropriate question for a referendum,” the Social Democrat said.

“There is a lot of information on national security that is confidential, and such important issues cannot be decided in a referendum and they cannot be put on the table.”

The Swedish parliament is currently considering security policy, and a final report is expected in mid-May. 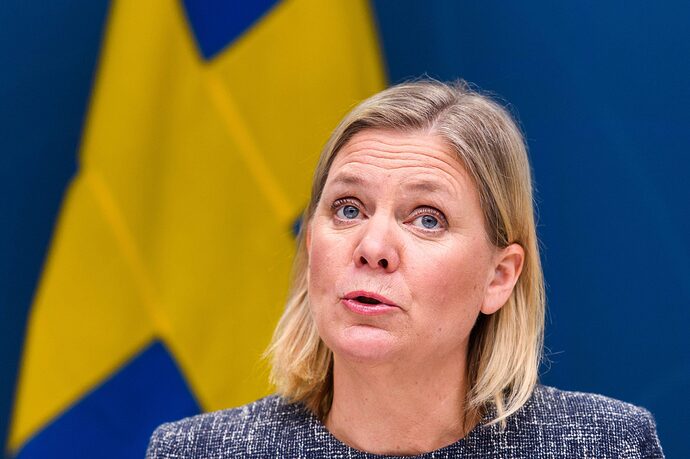 There are us here with long memories (and number of years):
Sweden already had the lowest birth rate in Europe in the late 1970s and mid-1980s.
Today, according to current statistics, Sweden has an above-average or even high birth rate for European terms !? Inge and Helga give birth to three, four children ??
And let’s not pretend to be naive:
When and in what to integrate a young Migrant ??
Everyone who follows, say, the Eurovision Song Contest, knows what I mean !?
Like · Reply · 12 · 17 h

Darko Bozuta
Swedish law allows insults to be insulted with the security of the police. This is considered a “civilizational achievement.” However, there is no talk of it. It is not about that because there is no human right that would allow insulting one’s shrines. It is the spread of religious discrimination and hatred. a mistake in themselves and not in discriminated migrants.
Like · Reply · 1 · 3 hrs

Marijan Grdašić
It is true that integration fails when parallel societies and civilizations are created within the host state. In such circumstances, one should not prolong the agony, but deport criminals to where they came from because they endanger the survival of that state. But not all criminals are a priori, neither mobsters nor religious extremists, there are no generalizations, but the police have the best information about that.

Conq, can you come in on that one please?

Integration was too weak at the same time as we had large immigration. “Society was too weak, resources for police and social services were too weak,” she said

“We should have tried harder”. The Left is the same the world over. You only have to know then in one or two countries to know them in every country.

Lots of writers on the subject have pointed out that Integration is actually impossible in situations where having a Western Passport is the main thing that makes a migrant, his child & grandchild eligible for marriage. Each generation will bring a cousin over from their village back home to marry. And that cousin will not speak the language and will speak their own language to the kids. So you end up with 3 generations of “Integration Issues”

I think that the only places where integration worked was when immigrants were told on arrival “this is England!, you act like an Englishman or leave”, many of the immigrants who arrived in the North of England during the 1950s, did in fact integrate reasonably well as they had no choice.
Much later, they were encouraged to “reconnect” with their culture.

Chinatown being one notable exception, the Chinese have never integrated into anywhere anywhere they go. These days it seems that Muslims have adopted the same strategy.

I think that the only places where integration worked was when immigrants were told on arrival “this is England!, you act like an Englishman or leave”, many of the immigrants who arrived in the North of England during the 1950s, did in fact integrate reasonably well as they had no choice.
Much later, they were encouraged to “reconnect” with their culture

Well I know for sure people who were in England in the 50s working alongside them would dispute that. There just werent that many of them so the trouble was less. Basically they mostly kept their heads down until they were a critical mass, then they starting taking over local institutions. Some immigrant groups are vastly more law abiding then others though. But all immigrant groups try to recreate home - hence the cousin marriage, honour killing etc. And if they aren’t aspirational all 2nd generation immigrant groups start gangs if they’re living in poor areas.

The fact that there only a small number of them was the principal reason that they had to integrate, of course many of the locals didn’t really welcome them, but that is a different issue.
Having a large number of foreigners landed into any community was always going to rattle people.