The Caretakers Covid-19 legislation, challenged in the High Court

I wonder is the beak trolling Gemma when he barks at her each week: See you Next Tuesday

I wonder is the beak trolling Gemma when he barks at her each week: See you Next Tuesday

Reading the transcripts, I am amazed at how accommodating, conciliating, our system is.

These pair of cranks are given the benefit of the doubt, and everything done to facilitate them, at every turn.

It is somewhat humbling to observe. It makes one realise that we have a lot of freedoms in this country we take for granted compared to many other places.

That said, there must be a way to handle cranks and bunglers so that the system doesn’t get overladen.

Therefore, yes, perhaps this is the way it is tacitly done, bringing them “through the hoops” so to speak, to ensure eventual coherency when they finally get to present their case (or not, if they can’t achieve the requisite coherency).

Here is the only published R0 that is based on accurate data set. From South Korea. All other studies are based on extrapolations from partial data sets.

The study was published on March 17’th. The simple fact is the academics writing the modelling papers tend to live in very set universes. So unlikely to search out data outside their own very small range of sources. And usually treating the process in a very theoretical way. All sources are not equal. And low grade data is toxic when it comes to models that may be used for public policy. Which most modelers dont seem to understand.

I cannot find any published Tawinese data sets so far. There is a overview in Chinese here.

The raw data is here

The South Koreans have a lot more raw data here

The German data is interesting. It seems pretty clean. But only by accident. The fussy bureaucracy at the RKI seems to have accidentally hit upon a testing protocol that ends up with a fairly accurate data set for actual SARs CoV 2 infection deaths in Germany.

No one half sane and informed could watch this and not think it absolutely despicable, imho.

The tirade was live-streamed by conspiracy theorist Gemma O’Doherty who threatened the garda with “abuse and vitriol”.

AGSI General Secretary, Antoinette Cunningham said that policing in the country during this current pandemic is the sole purpose of the current emergency plan.

I presume this is the video in question. It has garnered eight times more dislikes than likes. And when I read the first hundred comments I didn’t find a single one supporting O’Doherty. What an odious character! Like most conspiracy nutcases she has an overweening sense of her own relevance and importance.

I know very little about her but based on that evidence, shes right on the edge mentally.

I cant understand why Waters would be knocking around with her.

I posted a video previously of her interviewing a chemtrails conspiracy nut, and another with Christopher Lord Monckton who serially misrepresents climate science. She’s a Class A loon.

I posted a video previously of her interviewing a chemtrails conspiracy nut, and another with Christopher Lord Monckton who serially misrepresents climate science. She’s a Class A loon.

interviewing a chemtrails conspiracy nut, and another with Christopher Lord Monckton who serially misrepresents climate science. She’s a Class A loon

In fairness, theres plenty of it going around at the moment.

A formerly high calibre poster to this forum spent the past week accusing people of being all manner of sinister before taking his ball home with him.

I also read previously that O’Doherty lost her husband a couple of years ago and I also dont think she has any children. Such people are highly isolated within the current set up and must be finding it difficult to cope with the solitude. A number of high profile celebrities appear to be going through similar meltdowns.

Most of us generate our sense of self via how we are reflected back through other people. Id guess that this is more pronounced for people in the public eye who tend to be in receipt of constant, instantaneous validation from those around them. Thats gone now and is probably quite difficult to deal with.

Just goes to show the value of the ties of blood and friendship. Little else matters in truth.

One on climate change thread, can’t remember the other.

Continuing to fight for your right to party.

John Waters and I will return to the High Court in Dublin tomorrow at 10.30am as part of our action to end unconstitutional #LockdownIreland, which is causing so much harm to the health and livelihoods of the Irish people #COVID19
Open_Window 2020-05-04 23:33:40 UTC #27

Interestingly enough Gemma O’Doherty has nearly 52,000 followers on her twitter, it will be interesting to see if it goes up or down.

3 posts were merged into an existing topic: The Great Global Warming Debate

Think the overall state of emergency ‘lockdown’ has not been ruled on here, but the right to charge/fine people for breaking the lockdown is not strictly kosher

Romania’s Constitutional Court (CCR) ruled on Wednesday that the government’s state of emergency decree no 34/2020 issued on 26 March amending the article no. OUG 1/1999 on the state of siege and state of emergency had been found unconstitutional. According to the CCR, the government cannot restrict the exercise of rights and freedoms through an emergency decree. These decisions can only be taken by a law approved by Parliament.

According to the decision, the provisions of two articles of the Government Emergency Decree no OUG 1/1999 and no OUG 34/2020 concerning fines for non-compliance with restrictions during the state of emergency, “are characterized by a lack of clarity, accuracy and predictability”, which “encourages the police to arbitrarily punish offenders”. The CCR states in a press release that the law on infringement, like criminal law, is subsidiary, and should intervene only when other legal remedies are not sufficient to protect certain social values.

About 300,000 fines have been imposed since the state of emergency came into force, totaling more than 600 million lei (about 120m euros) for the violation of the restrictive measures.

Prime Minister Ludovic Orban said he was “shocked” by the Constitutional Court’s ruling, which justifies “a very small minority that does not respect the law” and ignores the “overwhelming majority, over 98%”, who behaved “responsibly during this period “. He added that the government would seek “a legal way to allow the authorities” to fight “effectively against those who do not respect the rules” and risk spreading the virus. “We will definitely find constitutional and legislative solutions”, said Prime Minister Ludovic Orban. He claims the CCR’s decision is an “invitation for every citizen to break the law” and the rules that were enacted during the state of emergency. “Basically, it’s a call for anarchy and it’s a call for misbehavior towards society”, Orban stressed.

Confirmation, if any were needed, that she’s a Qool-Aid sipping moron. I seriously wonder if there’s another virus turning some people’s brains to goo.

She appears to be summarising this video embedded in her tweet which comes from the James O’Keefe’s twiter acc, here it is:

The medical center in the middle of an accusation that CBS News staged the visuals for a report on the coronavirus has taken responsibility, according to local Michigan station Wood TV.In a Thursday evening statement given to Wood TV, Cherry Health... 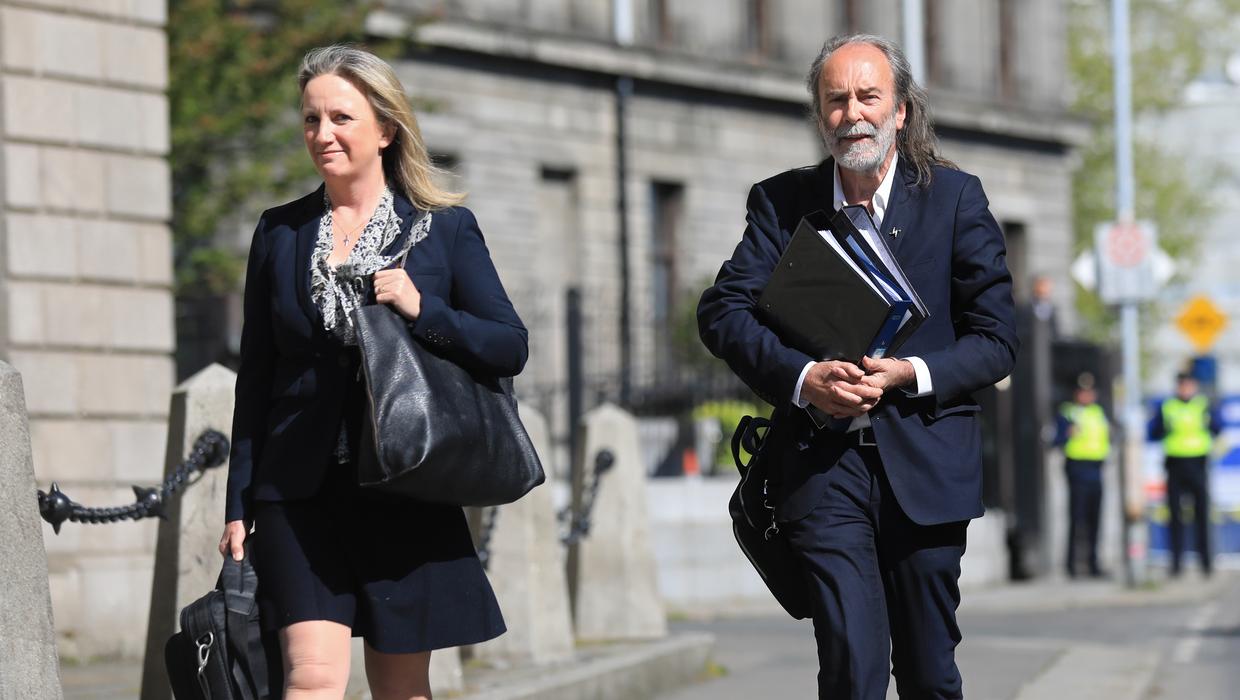 The High Court has dismissed John Waters and Gemma O'Doherty's legal challenge against laws introduced by the State due to the Covid-19 pandemic.

The beak has spoken.

The Garda’s role in enforcing Covid-19 restrictions has become untenable and the force should return to more regular policing duties, senior officers have told The Irish Times.

A number say they believe the time has come to bring an end to the Garda Covid-19 enforcement role, which they claim has become unrealistic and unworkable.

What a difference a summer makes

‘Telescoped’ hearing to take place next month
Ryanair and the State have agreed to an accelerated hearing of the airline’s High Court challenge against the Government’s international travel restrictions.

In an action launched last week, Ryanair claims that the ‘restrictions’, arising out of the Covid-19 pandemic, are unlawful, amount to a disproportionate interference of individual’s rights and are detrimental to its business.

In its action against An Taoiseach, Ireland and the Attorney General the airlines seeks and order setting aside the measures. Aer Lingus Ltd is a notice party to the action.

The State, which opposes the action, says the measures are advisory, and not mandatory in nature, as alleged by Ryanair. The State also claims that there is no basis for a legal challenge against the measures.

And the court can get a move on when it wants to, or a ‘telescoped’ hearing as its now called

That application was due to be heard next week. However, on Wednesday evening lawyers for the parties told Mr Justice Mark Sanfey that they had reached an agreement that will accelerate the process.

Eoin O’Shea BL for Ryanair said it had been agreed that there would be what is known as a ‘telescoped’ hearing, where the application for leave and the full challenge itself would be heard at the same time.

The parties were seeking a hearing sometime in mid-September, and the case would take two days to hear, counsel said.

Frank Callanan SC for the State said the State respondents had consented to a telescoped hearing, and a timetable for the exchange of legal documents had also been agreed.