Two in five Irish jobs will be affected by automation in the coming years, Taoiseach Leo Varadkar warns

One assumes Taxi drivers will be the first to bear the brunt.
Not long now before all new cars will have autonomous control.
At the beginning, you’ll have to have a licenced driver behind the wheel.
But gradually, as more data is collected, that will disappear.

I reckon it’s all over in 20 years.
They will be able to do it in 10, but legislators will need a further 10 to conclude drivers are no longer legally necessary.

De Bert MkII, Viceroy of the Technocrats speaketh the New-truth!

Two in five Irish jobs will be affected by automation in the coming years, Taoiseach Leo Varadkar warns

In case you missed it:

Ireland’s least at-risk careers were said to include teaching and education, professions in the arts, media, health and social care, and research.

Google claims it has achieved 'quantum supremacy' – but IBM disagrees

Task that would take most powerful supercomputer 10,000 years ‘completed by quantum machine in minutes’

As we’re all here alive now, witnessing the cusp of such order and such magnitude, that would make anyone perpetually dizzy, a little or a lot. Then if you may need to catch your breath for a moment, I throughly recommend watching this very short video:

Or maybe it was the realisation that animals were just one type of energy consuming machine. Count Rumford’s 1798 experiment showed that two horses turning a cannon boring lathe generated as much frictional heat as if you’d burned the oats that you fed to the horses. In one fell swoop he overturned the caloric theory of heat, anticipated 19th century thermodynamics, and got a nice shiny cannon barrel to boot.

This is great news for all of us…

I think the kind of methodology being used here is so close to how human beings do it, but with the kind of computing power that AI can bring, that it is always going to beat humans in all but the most unusual cases i.e. let human radiologists do the expert diagnosis to build a database and once that database gets big enough, just use the computing power to compare what is on the screen with previous positive and negative patterns. 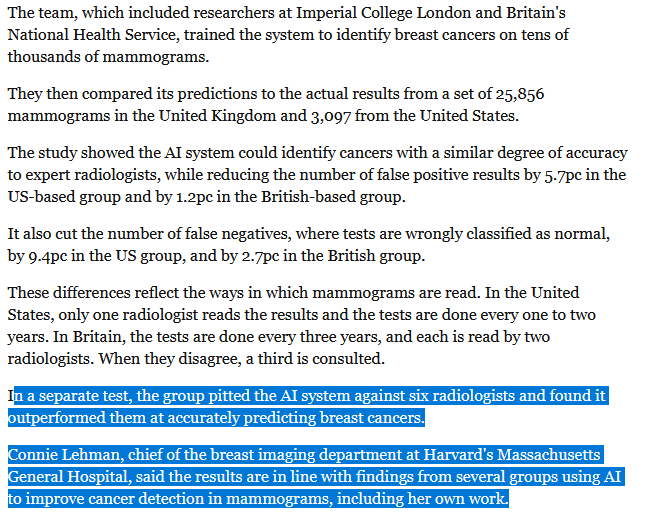 This is great news for all of us…

It is indeed. I saw something similar about retinal scans that are used to diagnose abnormalities like macular degeneration. AI diagnoses matched the best that humans could do.

The Taoiseach said he is conscious that the concept of AI “hasn’t had the best reputation” in popular culture, but said it could play a crucial role in economic recovery…

Mr Martin said there is a “false narrative” that the emergence of technologies such as AI represents a threat to jobs, saying it will ultimately create more jobs than are lost.

Irish move towards artificial intelligence does not threaten jobs, Ta…

Time to bring in UBI, if you tax the income generated by using AI & robots that have displaced jobs, thei it can be used as the source for funding UBI instead of adding zeros to the billionairs bank balances.

Yes. It’s on the way. Most of the jobs are waste of resources anyway.
There is technology to make cars last a livetime without any mechanical intervention. No old tyres to be recycled on children playgrounds as they do now. Cancer.
Same with all the house appliances, furniture, clothing (the shoe sole might be replaced every year or 2).
That’s what the so called COVID-19 (all upper cases, so it doesn’t exist, same as the name on the driver’s licence ) is about.

Global Corporate Tax has something to do with that anyway.

The whole “medical industry” has basically eliminated themselves as well. They were officially (I would say more in practice) the cause of ~33% of deaths in US.
This industry was mostly based on the trust, programming and avatars. Whoever still follows this old paradigm is failed.
We just need time for half of the population to eliminate themselves which is about to happen this winter.
The remaining will come back to traditional Celtic, Germanic, Slavic methods.
Then again, death is not the end. We are comming back.