Spare us Frankie Boyle’s lecture on offensive comedy | The Spectator

Frankie Boyle is complaining about offensive comedy. In a year of firsts and unprecedented moments, I’m not sure anyone could have seen this one coming. The Glaswegian comic had a pop at Ricky Gervais in a podcast interview with Louis Theroux...

Renowned economist David McWilliams has urged house buyers in Ireland to keep renting and stop searching for a house to buy immediately.

Speaking on The David McWilliams Podcast, the economist stated that the market is now at ‘peak dysfunction’, and that this is the worst period for value in Irish housing in over a decade.

Incredibly ambiguous wording and I should know.

Strike while the iron is hot and buy a gaff… oh no no, go on strike, keep renting.

So that probably means the market will do the first thing i.e. the very opposite.

121 - The Psychology of the Far Right

All European countries have seen increases in far-right parties in the last decade. This political affiliation will not just disappear as most people hope it will. This week we look the far-right straight in the eyes and try to understand the...

This is a good example of how propaganda works in modern mass media.

Experts. (Psychoanalysing the “far right”)
Quasi-social banter.
Pre-packaged opinion pieces as though packages for the audience. (Dumbed down and versions of the original ideas and concepts with many of the key aspects omitted.)

It’s worth noting, they talk around the issue of the right, without actually specifying what the right is and what far right is in particular.

Some other canards discussed by DMW and his friend.

David strikes me as a man whose mind is in conflict through this mess. He’ll have half a podcast that is spot on, make some strong points, and he ‘gets it’, with all his insiders/outsiders/punk attitude stuff, but the content for the next 1.5 podcasts are straight from the Globalist mainstream playbook which necessarily contradicts what went before.

He’s overdue a good podcast now. His podcast prior to this one was discussing the virtues of “Modern Monetary Theory” (money printing).

Edit: Actually, no I’m wrong there…the 1 prior was about the dysfunctional property market caused by COVID. That was quite good analysis.

McWilliams is one of Klaus Schwab’s acolytes; I had no idea.

Thread by @ThreadsIrish: 1. “Why Does Economist David McWilliams Claim He Isn’t In The World Economic Forum Whilst They Think He Is?” David McWilliams is probably 🇮🇪 most well known economist frequently appearing o...…

His threads are fantastic…

David McWilliams has issued a stark warning as the property market reaches 'boiling point'. The economist said that there is now huge...

Slating a ‘crazy concentration of wealth’ which sees 15% of the population holding the vast majority of Irish assets, McWilliams warned that the state has now lost control.

‘Governments that were managing the housing market quite well, in a slightly manipulative fashion from a political theory, have now lost control.’

‘It’s like all great ideologies, they tend to have within themselves, the seeds of their destruction. And I think this is what’s happening here.’

Before concluding, McWilliams highlighted plummeting support for the current Government among renters and warned that there is now a massive division in Ireland brewing between house owners or ‘the people on the inside’ and those without a home.

David had Bernie Sanders on a recent podcast to discuss Bernie’s role as chair of the Senate Budget Committee and the need for humongous infrastructure spending, funded by ‘cheap debt’.

David declared he sits on the board of Sanders’ Institute in Vermont, and he can regularly have Bernie over for a talk in Dublin or an online stint at the Dalkey Book festival.

All fair enough, but this background and his international links needs to be taken on board whenever David is rolling out his opinions on those of a right leaning persuasion, and the need for more and more spending in Ireland. Which, these days, is generally once every two weeks or so.

“infrastructure spending” is a code word for wasteful spending on a truly obscene scale. I have yet to see an “infrastructure project” in the last two decades that got the go ahead that was not a total waste of money.

Here is a just one minor typical example of these “infrastructure projects”. So there was a floating bridge in Seattle that was at the end of its effective life. Total cost to build a replacement to the original spec using original plans. About $300M. But no, the “urban transit people” wanted the new bridge to carry light rail and must have a HOV lane and each side of the bridge had to be “ecologically sensitive”. One side was a hill slope the other a swamp then a hill slope. The cost of the Environmental Impact Report alone was $300 million by the time it was finished.

The original bridge was build in 3 years. The current bridge is unfinished after almost 20. The total cost of the replacement bridge will be over $15 billion. There was no long term financing for bridge construction so they brought in a very expensive toll to try to pay for parts of it. As a result traffic on the bridge is down 60% There is an interstate bridge a few miles south which cannot be tolled so traffic on it has more than doubled.

Under current environmental regulations and planning regulations i cannot think of one single proposed infrastructure project in the US that is not a total waste of money. But all are a huge payday for Dem Party donors and supporters. Like unions. Where they get payed double market rates for 20% shorter work week. And the projects lasts up to 10 times longer than a commercial building project. Whats not to like.

There are good infrastructure projects and there are bad ones, that bridge for example was an essential infrastructure project, the alternative would to have been to risk a bridge failure.
Cars driving into the water at speed is never a good thing, the issue is how badly mismanaged many of these projects have become with so many mouths at the trough and politicians ensuring their friends get well fed.

Replacement of end of life infrastructure is essential to maintain the running of any country, it just needs to be managed better.

It also fits neatly into the ‘build back better’ narrative.

McWilliams mentioned the Long island rail as an example of rickety infrastructure as soon as Europeans arrive in America.

I seem to recall from the aftermath of 2016 that Trump was going to do the devil and all on this as well.

The issue for Ireland is that it is €250bn in debt due to splurges on everything and anything but capital expenditure. Basic, key projects like Metro north to the airport have become a complete joke under Varadkar’s watch as minister for transport and then Taoiseach, and now doesn’t seem to be a great time for achieving value for money in construction.

How much has been spent on the children’s hospital too? Or on the Luas lines? We spend a fortune on projects like that… huge amount of waste.

The bridge was good for at least 20 years as is when they decided to replace it. Actual repairs were section replacement over time. It was built out of concrete floating sections. They were designed to be replaced when needed. The original bridges were deigned and built by people who knew what they were doing. They even built a replacement sections to be used when needed when they built the original bridge

The replacement has been nothing but trouble. A rerun of the Bay Bridge debacle. Where $500M upgrade was too expensive but a $25B replacement that will fail in the next big earthquake was a great idea. Well at least they now have $600M bikes lanes which almost no one uses.

The problem with the 520 bridge was the usual suspects wanted to put light rail everywhere. And they needed a bridge. They spent another $20 billion on a light rail system that just drew off ridership from the buses. Which used to be a fantastic system until the light rail expenditure gutted the bus maintenance and acquisition budget. Whats even more ironic is that the new light rail stations destroyed the heart of of a bunch of neighborhoods which are now full of bland sterile condos built around the stations. Which are little used.

If they had followed the same maintenance procedures on the 520 bridge as the had for the previous 40 years the bridge sections could have been incrementally replaced and maybe the anchorage might have needed some work in about 50 years time. So $15 billion spent to put a low ridership light rail system on a bridge.

As I said, not one single project of the last 20 years bears any kind of scrutiny. I can think of a whole bunch of actual infrastructure projects that should be build but has not. Like replacement dams, reservoirs and canals. And freeways. But they never get built.

Ah yes, LIRR. What McWilliams fails to mention is that its crap because of massive political corruption and mismanagement going back generations. Even by the profligate standards of big city public transit NY MTA who run LIRR have costs are at least 3X of any other system.

With organizations like this its pretty simple. If someone believes the situation can be improved by throwing money at it they have not clue about what’s going on The only way to “fix” something like LIRR is to abolish it and subcontract out the service. Not going to happen. The unions will make sure of that. And everyone else with their snouts deeply in the taxpayer subsidized trough.

The bridge was good for at least 20 years as is when they decided to replace it. Actual repairs were section replacement over time. It was built out of concrete floating sections. They were designed to be replaced when needed. The original bridges were deigned and built by people who knew what they were doing. They even built a replacement sections to be used when needed when they built the original bridge

They sound like, well correct me if I’m way off the mark here, but they sound a lot like, maybe they could be I mean I’m not totally sure, but wow they really sound like you know, engineers.

Time for one of the more well know bridge memes of our time! 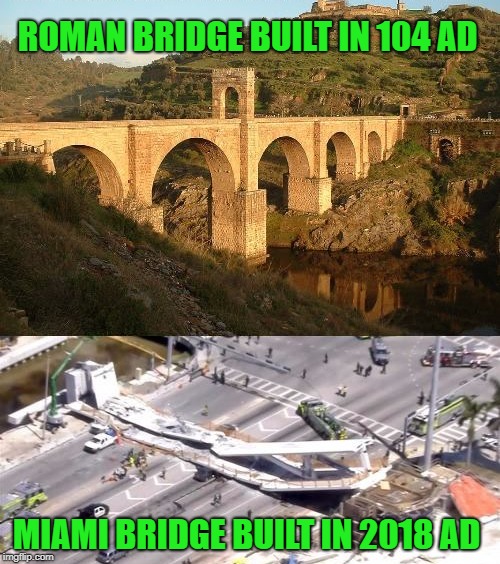 So that’s when bridges were bridges (though we have to give credit to the Dynastic Chinese, as they discovered and employed the segmented arch a long time before the west), todays diversity bridges, well a bit like Aghfnistan evacuations yea, when the rug is pulled out under eh ahem erm ahem…

It’s always interesting to look at past architecture and think how did they build things that we would find extremely challenging today, even with all our tools, vehicles and devices. Cathedrals can be stunning. Some stained glass is a bit ugly though.

Has anyone replicated roman concrete yet?

I believe they had technology (atmospheric energy, charged water, as well as a non-materialist understanding of time and life, for example) that has been (very deliberately) erased from history. Modern man knows nothing by comparison.

It’s fascinating. But the implications are absolutely staggering.

I do remember seeing memes along the lines of saying that if we think fake news is bad, wait until we hear about fake science & fake history.

Who knows how much of nasa etc is cgi? Did Branson & Bezos really just race to space? Seemed very short notice, but well publicised near the event.