The Grange - what's the story?

In a similar vein to the ‘Booterstown Wood - what’s the story?’ thread, I am curious about The Grange in Stillorgan.

It was a poster child for pretentious marketing during the boom with a “Spirit of Gracious Living” slogan, and it was even satirized by Ross O’Carroll-Kelly. I read one beds were as high as €480,000 (always write out the prices in full so people can grasp the magnitude). Therefore I am curious about those prices now, as a barometer.

However I do not see new or second hand properties there on Daft. There is a big unfinished building there that is static for maybe two years now, and other planned block they never started. Given the price and the marketing, these unfinished areas must irk the owner-occupiers.

There were reports that the property developers rented out a lot of the finished apartments. Did they get out of selling entirely to become landlords?

I know a guy that is renting there, will ask him if I remember.

Remember the large hoarding signs out front when it was being built,
wish I had taken a photo of it.

Well €400,000 in negative equity on a 2 bed, with social tenants next door,
in a half finished apartment complex overlooking the Stillorgan dual carriageway.

Saw a funny quote like this somewhere can’t find it now. 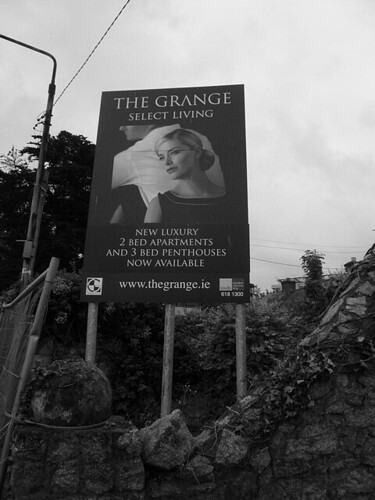 Unfinished building is very odd. Presume NAMA will complete and dump on the market.

Anyone who fell for the advertising had it coming big time. People who aspired to be arseholes got buggered.

It is March 2011. Is anyone working on the big block you can see from the dual carriageway at all? What have the residents been told by the developers?

However I do not see new or second hand properties there on Daft.?

Remember the large hoarding signs out front when it was being built,
wish I had taken a photo of it.

Well €400,000 in negative equity on a 2 bed, with social tenants next door,
in a half finished apartment complex overlooking the Stillorgan dual carriageway.

Saw a funny quote like this somewhere can’t find it now.

What a great photograph Arbitrager -for me it totally sums up the insanity of this country for the last 10 years. It puts me in mind of Shelley’s “Ozymandias”

I met a traveller from an antique land
Who said: Two vast and trunkless legs of stone
Stand in the desert. Near them, on the sand,
Half sunk, a shattered visage lies, whose frown,
And wrinkled lip, and sneer of cold command,
Tell that its sculptor well those passions read
Which yet survive, stamped on these lifeless things,
The hand that mocked them, and the heart that fed;
And on the pedestal these words appear:
“My name is Ozymandias, king of kings:
Look on my works, ye Mighty, and despair!”
Nothing beside remains. Round the decay
Of that colossal wreck, boundless and bare
The lone and level sands stretch far away.

The website still works and is a real time capsule.

If, like me, you like to keep some reminders of the bubble for when memory fades, then don’t miss the chance to download a PDF of the brochure or even the Grange “Magazine”.

their spiel was laughable DURING the boom!!!

Wise investors and buyers choose
apartments long before the buildings are
complete.

That worked out well…

Speaking of overhyped developments, Ray Grehan of Glenkerrin pops up in London.

Two fully sold (to the owners and developers)… Just 84 to go! Truth about the most hyped luxury flats in the world → dailymail.co.uk/news/article … 84-go.html

Ray Grehan, property developer
A former tiler, Grehan founded the construction company Glenkerrin with his brother Danny. In 2005 he bought the former Veterinary College in Dublin for £145 million at the peak of the property boom. Ireland has since been devastated by recession and the college site is now valued at £34 million. Grehan now relies on UK developments.

One duplex apartment has been reserved by Mohammed Saud Sultan Al Qasimi, head of finance for the government of Sharjah, one of the United Arab Emirates.
Another is under contract to London-based Vladimir Kim, a Kazakh billionaire who is chairman of the Kazakhstan copper producer Kazakhmys, and another is being bought by Ray Grehan, the founder of Irish residential developer Glenkerrin.
But such is the ferocity of the international financial downturn that it is unclear if even these provisional sales will proceed to completion.

“Where your address says everything about you”

Really, in the sense of not really. But really, some of the properties were, and clearly in some cases still are, listed as Blackrock. Now, the other side of the N11, which is closer to Blackrock you have Stillorgan Park, so go figure.

That said I worked in an office in Sandyford Ind. Estate that listed themselves as Foxrock, so I think it might be a South County Dublin thing. Pretension, that is.

However I do not see new or second hand properties there on Daft.?

Someone go and apply - we are dying to know!

Take another look at the expression on the model’s face post-bubble and you can draw a very different interpretation of her feelings. Like:
“Oh sweet Jesus what have we done - we’ve just paid €480k for a 1 bed on the Stillorgan dual carraigeway”. It’s a look of regret and possible resentment to her partner in the background

Incomplete topic without the original observations …

Someone go and apply - we are dying to know!

So now NAMA has brought down the banhammer. Are we going to see sane prices, or are they going to finish that last block so you know what you are buying at least?