My question has nothing to do with the video.
Do you believe the concepts of geoengineering and weather modification to be utter nonsense?

Your question is irrelevant to any comment I’ve made. It’s an attempt to divert from the sheer stupidity of what you just posted. Those serious-looking people in the interviews are all self-interested idiots trying to carve out their own niche. Take Catherine Austin Fitts, for example. She struggles to get a sad few hundred views on her own conspiracy channels, on which she claims 9/11 was a false flag operation, Bill Gates created Microsoft Office to steal your data, and the current pandemic is Gates’ attempt to “install Microsoft Office inside your body”. If you’re gonna post bullshit, I’m gonna call bullshit. What I definitely won’t be doing is engaging with your pathetic ass-covering backtracking. You wanna try to defend what you posted? … be my guest. You wanna retract? … that’s fine too. You wanna ask diversionary questions so that you can do neither? … you came to the wrong person.

Not going to bother reading your absolute drivel if you can’t be bothered to answer a simple question.

That’s fine by me. If it puts you off posting conspiratorial horseshit, knowing you will be called out on it, even better.

The claim that humans cause the climate to change is the real conspiracy theory. Anyway, have a good day kiddo and watch that blood pressure.

So, no attempt to defend the crap you posted. Just more diversions, whataboutery and gish galloping. The standard conspiracy nut approach.

About a 5 hour drive north, i.e closer to the tropics, of Adelaide and it’s Mediterranean climate. Another day drive north puts you in the tropics.

As the earth rotates it is not a perfect circular orbit. It is actually further from the sun during the southern hemisphere winter. Snow is rare but not unheard-of in the Flinders ranges. Frost in the tropics can also occur in the winter/dry season.
Flinders ranges pic:
https://images.app.goo.gl/ZFgHunFTAnDPNwVY8

Low temperature records were broken in Tasmania and south Australia

We may have just seen the world's highest recorded temperature ever. Has that...

While I don’t disbelieve that the climate is warming, seizing on a single temperature event as evidence of climate change is misleading and anti-scientific. Yet the media seem to be doing it all the time now. Storms, floods, fires, and hot weather are all routinely attributed to climate change on traditionally reputable media, without critical analysis.

The fact of the matter is that records are made to be broken. In other words if, at a point in time, you start measuring any quantity whatsoever that has natural excursions around a mean, you will find that the range of the excursion increases with time. It’s just statistically obvious that records don’t get set early on and then stand forever. Look at a list of weather records for an idea of the randomness of the distribution. (On the other hand, the clustering of record high Antarctic temperatures in the current century looks to be of possible significance. That said, Arctic Norway and Greenland have yet to break record temperatures set in the early 20th c. Single data points are just not a clever way to measure climate change).

And why this particular data point? For evidence that climate is warming, wouldn’t we want longer term records? In terms of the highest number of hot summer days and the longest run of consecutive hot days in Death Valley, 1917 has never been surpassed. Which is not to say it won’t be – of course it will. That’s the nature of records.

Even the choice of Death Valley – a place with very particular geographical attributes – is misleading. It may have equalled the temperature record set in Kebili, Tunisia in 1931, but its elevation is 115m lower. We’d expect the temperature to be a degree Centigrade higher at Death Valley, just because of the standard adiabatic lapse rate. Likewise, the similar record temperature set at Tirat Zvi, Palestine in 1942 is at 130m lower than Death Valley, which must be factored into its significance. (It’s on a rift between tectonic plates, near the world’s lowest point on land).

I’m calling humbug on this. It signifies nothing other than that the media deals in sound bites, so a photograph of a thermometer and a journo trying to fry an egg on the ground (yes, that’s what the BBC aired) is always going to be more catchy that the painstaking work over decades of establishing actual climate norms.

I would also expect somewhere like the Australian Pilbara or one of the deserts in Australia to hold the world high temp record because it should. The Earth is closest the sun during the Aussie summer. Either records aren’t long enough and or there aren’t enough weather stations in remote parts of the world. Some parts are also below sea level.

In some placed the rocks are over 50% iron. I’ve been among sheltered hills in NW Queensland during summer. The soles of shoes go squishy and can melt.

Interesting to see satellites pick up temps in the 60s and even 70s.

The highest temperature recorded on Earth has been measured in three major ways: air, ground, and via satellite observation. The former of the three is used as the standard measurement, and is noted by the World Meteorological Organization among others for the official record. However, the method of taking the measurement has been subject to controversy regarding various factors such as environmental conditions. For ninety years a former record that was measured in Libya had been in place until...

Temperature measurements via satellite also tend to capture occurrence of higher records but, due to complications involving satellite’s altitude loss (a side effect of atmospheric friction), these measurements are often considered less reliable than ground-positioned thermometers.[15] The highest recorded temperature taken by a satellite is 66.8 °C (152.2 °F), which was measured in the Flaming Mountains of China in 2008.[16] Other satellite measurements of ground temperature taken between 2003 and 2009, taken with the MODIS infrared spectroradiometer on the Aqua satellite, found a maximum temperature of 70.7 °C (159.3 °F), which was recorded in 2005 in the Lut Desert, Iran. The Lut Desert was also found to have the highest maximum temperature in 5 of the 7 years measured (2004, 2005, 2006, 2007 and 2009). These measurements reflect averages over a large region and so are lower than the maximum point surface temperature.[12]

In meteorology, a heat burst is a rare atmospheric phenomenon characterized by gusty winds along with a rapid increase in temperature and decrease in dew point (moisture). Heat bursts typically occur during night-time and are associated with decaying thunderstorms. Although this phenomenon is not fully understood, it is theorized that the event is caused when rain evaporates (virga) into a parcel of cold, dry air high in the atmosphere- making the air denser than its surroundings. The parcel ...

Interesting. I would have said any difference in latitude would have more of an effect on solar heating than the Earth’s fairly small orbital eccentricity. But in this case I’m wrong. The eccentricity is a little over 3% giving a difference in the solar constant of 6.9% between perihelion and aphelion. Death Valley at 36.5°N gets 97% of the overhead sun value at mid summer (cosine of the difference between latitude and axial tilt). Whereas northern Queensland is in the tropics so the sun is directly overhead twice a year. So in fact the solar distance has more than twice the effect of the difference in latitude.

New South Wales is set for the coldest day of the year on Saturday, with temperatures plummeting to well below average.

What winter? More warm weather ahead, with farmers left high and dry

Queensland appears to have skipped the worst of winter, with shorts-and-thongs weather around the corner. But not everyone will be happy.

Winds that cause record breaking cold temps is giving Queensland a warmer than usual winter.

That’s a good point. It’s not all about the instantaneous sunlight levels. And Death Valley gets preheated by importing hot air from elsewhere by advection. The longest day in midsummer is about 14hr 40m.

I wonder what else we don’t know
https://www.theatlantic.com/science/archive/2020/08/centuries-old-theory-finally-confirmed/615295/

I wonder what else we don’t know
https://www.theatlantic.com/science/archive/2020/08/centuries-old-theory-finally-confirmed/615295/

Nice article. I’ve come across a similar concept from asteroseismology, where normal modes on the surfaces of stars are used to try to compute their internal structure.

The IMF already supplied part of the answer last year in a discussion paper on Long Term Macroeconomic Effects of Climate Change. It’s heavy going but worth dipping into. By sticking to the Paris Agreement and limiting warming by 2100 to ~1°C (the IPCC’s RCP 2.6 scenario) we lose less than 1% of global GDP per capita. However, under a ~3°C (RCP 8.5) warming we lose 7% of GDP per capita. Shock, horror!

There’s dispute in climate change circles over whether RCP 8.5 is the business-as-usual scenario or an implausible worst case emissions scenario. But either way, a 7% hit on GDP would be significant, right? Eh, no, not when you realise it’s the reduction in GDP compared to where it otherwise would be under normal growth scenarios.

Interestingly, the hit is uneven for different regions. It’s about 11% for the US, 2-6% for western Europe and much of Africa, and somewhere between those figures for Asia and Oceania. But regardless of those variations it’s a tiny number. We (or our great grandchildren) are going to be a lot better off in 2100 compared to now, with or without climate change and even in the worst case scenarios. Compare that with the scenarios painted by the lunatic fringe where the world bursts into flames in ten years.

Maybe someone realised that the IMF scenario isn’t sufficiently apocalyptic. I overheard a random interviewee on the telly subsequently talking about a 25% reduction in GDP per capita by 2100. Don’t know what (if any) source he was quoting. But even that’s still a very rosy scenario, to be celebrated, not feared.

EDIT: Table 7 from the IMF document gives the bottom line. The different m values are different moving average numbers of years over which climate is considered. The central projection is 7.22% loss in per capita GDP by 2100 under RCP 8.5, using a 30 year moving average (the norm for climate stats). Interesting that hot countries do better than cold ones, and poor ones better than rich ones. 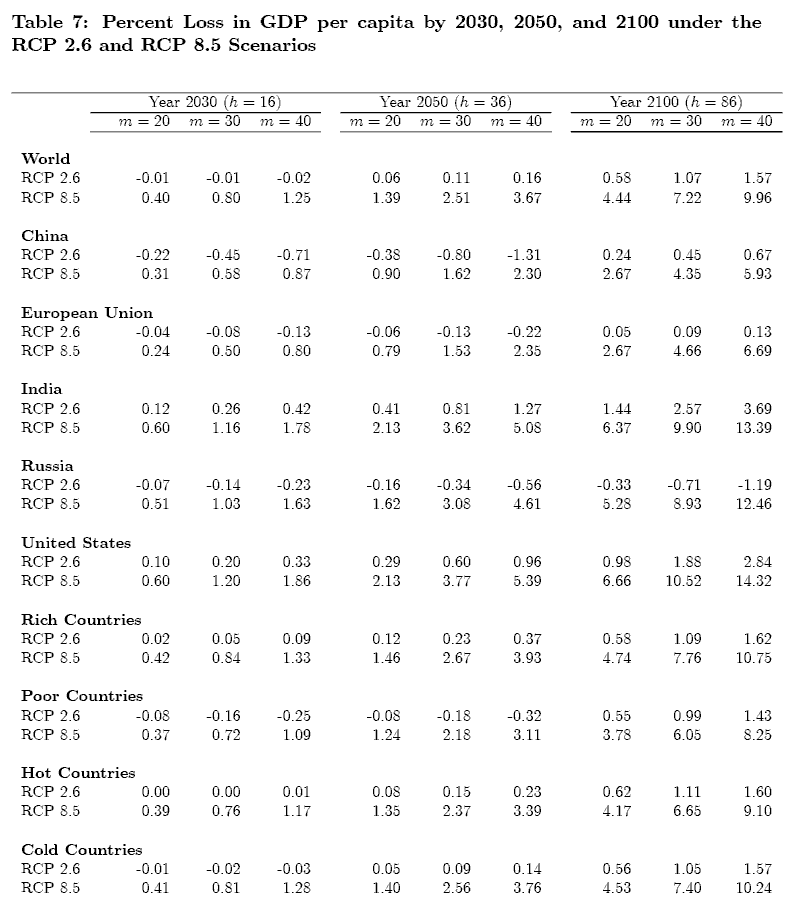 And an ice age is lights out, so warming could even be considered a good hedge in some scenarios. Assuming the warming didn’t have unintended consequences, which, of course it could. Including causing a little ice age in NW Europe.

'A bad idea whose time has come': The controversial science that could counter...

A decade ago, geoengineering was talked about as a "necessary evil" in the fight against climate change. So why hasn't any large-scale testing been attempted? 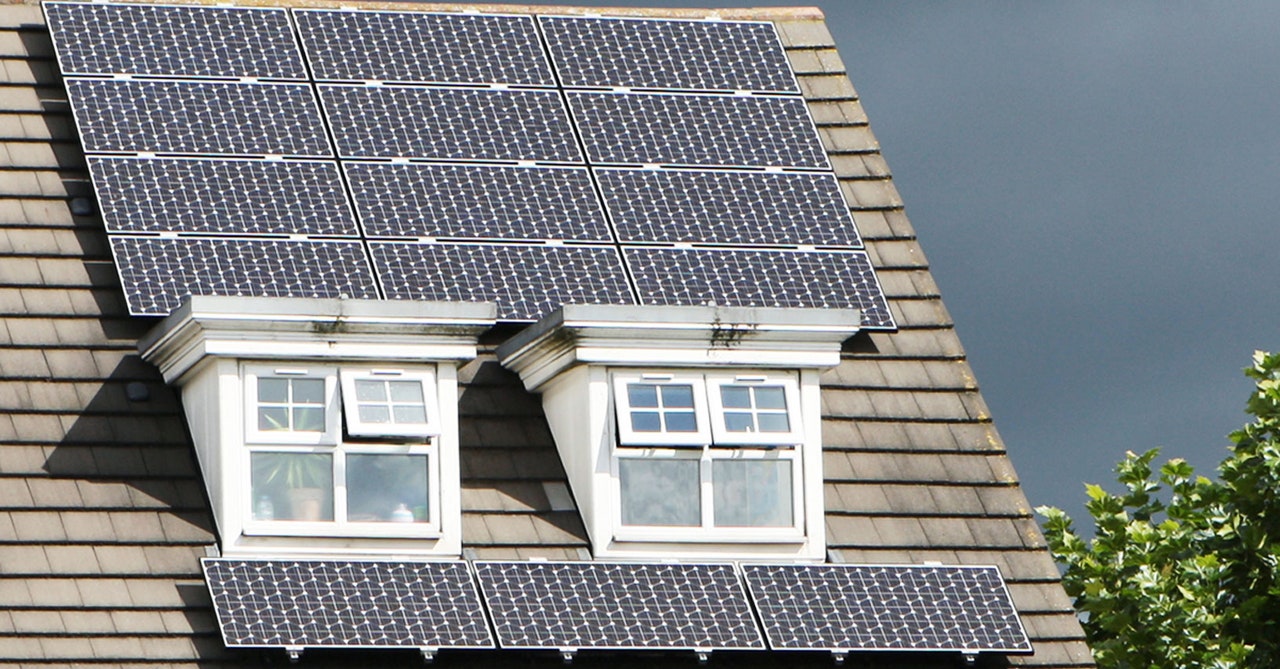 Solar Panels Are Starting to Die, Leaving Behind Toxic Trash

Photovoltaic panels are a boon for clean energy but are tricky to recycle. As the oldest ones expire, get ready for a solar e-waste glut.

Most solar manufacturers claim their panels will last for about 25 years, and the world didn’t start deploying solar widely until the early 2000s. As a result, a fairly small number of panels are being decommissioned today

I thought manufacturers guarantee their panels for about 25 years, but after that they continue to work but have lost maybe 20% of the original capacity, why would some one just scrap the whole set up, would it not be better to add a few more panels