“Working in philanthropy”=an employee of Soros’s Open Society Foundation- no conspiracy theory as such, just a point of information. I still don’t know what to make of all this tbh, and I wouldn’t rule out some mRNA injection interaction with HIV medication. This not being monkeypox at all and a cover-up of herpes and shingles outbreaks remains a strong possibility.

An informative article on the actuality of what’s happening: (contains graphic photos of diseased genitalia) 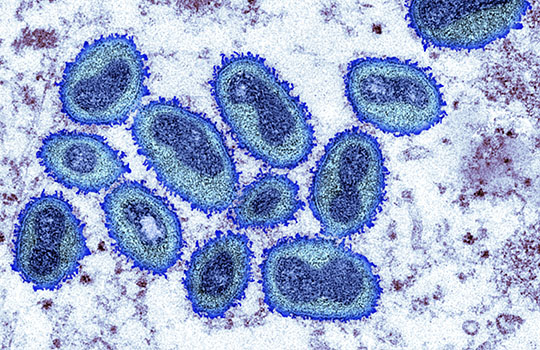 Clinical features and novel presentations of human monkeypox in a central...

All of these cases were diagnosed as monkeypox by PCR tests yet whatever is going around is causing different symptoms to historic cases. Is this a new syndrome altogether?

A variable temporal association was observed between mucocutaneous and systemic features, suggesting a new clinical course to the disease.

The observed clinical features of monkeypox infection in the 2022 UK outbreak differ from those in historical reports.

The characteristics of the cohort we describe differ from those of populations affected in previous outbreaks in endemic regions.

One participant, a 40-year-old man with a history of HIV (viral load <200 copies/mL on antiretroviral therapy, CD4 count >500 cells/μL), first presented with vesicular lesions at the base of his penis that he had attributed to shaving.

In other words, there are gay men out there with HIV, monkeypox and god knows what the fuck else who are living in complete denial and still having copious amounts of unprotected sex.

Let me ask you this.

Do you remember the public outcry last year against the unvaxed? They wanted to deny us healthcare on the basis of vaccination status.

Will we see the same outcry against certain people who pursue a different but very promiscuous life choice? The CDC recommends that sexually active people limit their number of sex partners, after finding the disease mainly in men who have had sex with several men.

“40% re­ported that they had two to four part­ners and 14% re­ported five to nine part­ners in the three weeks be­fore de­vel­op­ing mon­keypox. About 19% re­ported 10 or more part­ners dur­ing that pe­riod, the CDC said Fri­day.”

This is The Wall Street Journal talking.

Is it time to take action to “flatten the curve”? Should we have all homosexuals to do the right thing and stay at home? Should we have them download some geolocated app so we’re aware of their location to “prevent the spread”? We’re in the middle of an epidemic and these are “unprecedented times”, is it not unreasonable to take action against these super spreaders? New study: Monkeypox may be an STD

A new Lancet study suggests that monkeypox could be a sexually transmitted disease. Researchers analysed a 39-year-old male patient who presented typical symptoms of the disease, including a fever and lesions on the skin. Semen collected from the...

Twitter censored Prof. Shapira, a top Israeli physician who claimed that monkeypox is related to mRNA vaccine, hopes to draw more attention to the death and destruction that these vaccines are delivering to so many people throughout the world.