We documented the Nexus situation some years back. When the crash hit he was caught with a load of €1m houses in Carraig an iolair in Barna and Bramley in Oranmore plus a couple of sites. Fair play to Tom…he didn’t hang around.

A Galway builder formed a new construction company in England – which specialises in rail contracts – less than three months after his luxury homes development business here collapsed with debts of €12 million.

And the Connacht Tribune has learned that Tom McEvaddy Jr, whose Nexus Homes company went into liquidation in September 2009, is facing a High Court action next month to have him restricted from acting as a director of any Irish company for a period of five years.

He now lives in a €1m detached house around 2.5km from the iconic Wembley Stadium in London.

The collapse of the Galway-based Tom McEvaddy Property Company Ltd (Nexus Homes) in September 2009, saw more than 180 unsecured creditors – who effectively have no chance of ever being paid – owed just under €4m, while Mr McEvaddy himself is owed €7.1m in director’s loans.

Architects, engineers, electricians and electrical suppliers, plasterers, landscapers and builders were among those ‘hit’ for individual amounts ranging up to €320,000 – many of whose businesses since faced serious financial difficulties as a result.

He told creditors when he wound up Nexus: “Whilst it’s of little consolation to those of you who will not get paid as a result of the company’s collapse, I am now in a position where I personally owe the banks many, many millions, with no prospect of repaying that money.”

The 40 year-old developer – who is also a director of Galway United Football Club – and his wife Lorraine went on to set up Brontë Construction in London in December 2009.

The couple, who have dual Irish and British citizenship and had been living between two properties on Taylor’s Hill – still boasting the highest property prices in Galway – have now listed a home address in the affluent Wembley Park area of Brent in Middlesex.

Someone is pulling their leg…

Not filing for bankruptcy then?
Their short-term flats on Maunsells Road appear to be popular letsbookhotel.com/en/ireland … views.aspx

I was sure that AIB …the main lender… had taken over Fort Eyre House. Describing the middle of Shantalla and across the road from Shantalla National school as being on the “outskirts of salthill” on the travel booking sites is typical of what a banker would do

Either that or NAMA has them , more history here and ultra tatty streetview here

Fort Eyre is up for sale.
12 residential & 1 commercial premises. Asking price is €1.3m
I can’t find a link.

I’m surprised that the auctioneer has not mentioned the fact that the ‘Father of the Electron’ lived across the road at one time. Other news from Galway is that O Malleys are in receiveship since last week. Not worth a thread of its own.

Galway builder whose company went bust is back in business

Tom McEvaddy – whose Tom McEvaddy Property Company/Nexus Homes collapsed with debts of almost €12m (including more than €7m owed to himself) – and his brother Jason are seeking a five-year extension of time on their planning permission to build four detached houses on the site of the former ‘Spring Lodge’ house on Circular Road.

And McEvaddy is back in Barna…next door to the Thornberry estate! 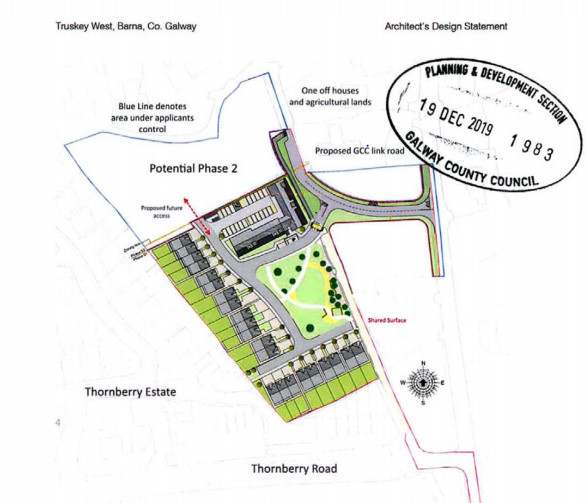 As he himself developed Thornberry I wonder how McEvaddy held onto the land to the north of it seeing as half the banks were looking for money off him and he was not for paying them,