Traffic Vaccidents - Have you noticed an uptick?

There has been a reporting trend for approx. 3 weeks, as if everyday there are fatal motor accidents reported on broken news top story.

Add to that much early speculation and anecdotal observation online, that a major danger in all of this is people spazzin’ out at the wheel as the clot hits the brian or heart or whatever causing death and mayhem on the roads and/or an increase if woeful or bizarre thoughtless driving on the roads.

The driver of a tractor has died in a single-vehicle collision in Co Westmeath.

Gardaí were called to the scene of the fatal collision on the R389, Mullingar Road, Kilbeggan on Monday at around 7.50am.

The driver of the vehicle, a man in his 70s, was pronounced dead at the scene.

The road is currently closed to allow Garda Forensic Collision Investigators to examine the scene, with local diversions in place.

Investigating gardaí are appealing for witnesses to come forward, and particularly to any road users who were travelling on the road at the time with camera footage to make this available.

Surely people saw him walk in?

A man in his 80s has died and five others have been injured in a road crash in Co Laois.

Gardaí are investigating the three-car collision on the M7 close to the intersection with the M8 at approximately 7.15pm on Monday.

The elderly being one of the first main cohorts to get shot up with for some, a slow release dignity dignity death poison, unlike the residential homes they are a mobile group and in rural Ireland everyone needs a car to get around and do most things.

These lads probably got shot up around Feb/March IIRC and the uptick seems to occur not just with easing of restriction but approx 3-4 months after that or thereabouts. That does seem in line with the progression of anecdotes from the US

The timing is starting to look about right in comparison to observations emanating from the US - after this will people be dying / found alone at home.

In summary, there could be absolute carnage on the roads this winter and more besides.

I really hope that this is unrelated!

Tributes paid to priest hit by bus in Cork Harbour

Tributes have been paid to Father Con Cronin, who died after being hit by a bus in Monkstown in Cork Harbour.

It’s not convid so who cares right?

Belfast Telegraph confirm that the driver, a man in his 50s, had a medical emergency…

Two people have been killed in a bus crash after the driver suffered a medical emergency behind the wheel and lost control of the vehicle.

Well things have escalated since the OP was posted - I came on to post this story but I see I’ve primed yis’er confirmation bias algorithms to somewhat synchronistic effect!

Hmmm… looks like the Regime media have been told to play down any Vaccidents, based on MSN and Belfast Telgrpahs off reservation reporting of a “medical emergency”

You know they already know this is going to happen. Ireland is a guinea pig. One island Lab.

See how long Paddy O’Truman takes to twig he’s been had for real.

Another mention on twitter, with more mentioned in replies:

Same in Italy. Also increase in summer sickness (blamed on the hot weather) and increase in the number of accidents in general (eg accidents on the job, etc. ) 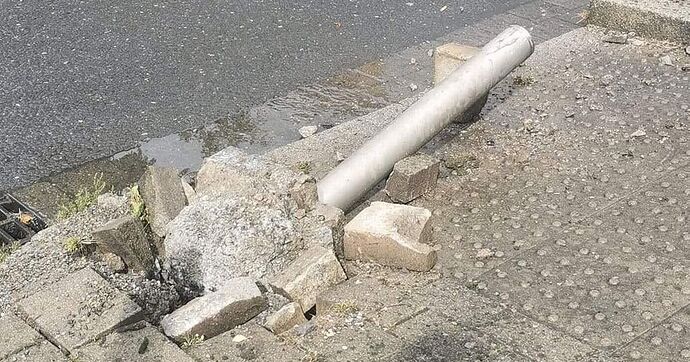 Residents watched in horror as a car ploughed into two poles just mere metres away from kids playing in a north Dublin residential area. The shocking inciden

A 17-year-old girl has died and two other people have been injured in a road crash in Co Meath.

More death behind the wheel - Would they be appealing for witnesses if the guy was suicidal?

Man in his 20s seriously injured after collision in Cork

The incident happened just after 8pm at Hadwell in Lower Aghada.

Gardaí are appealing for information on a single vehicle collision in Cork last night which has left a man in his 20s in hospital with serious injuries.

The incident happened just after 8pm at Hadwell in Lower Aghada.

The driver and only occupant of the vehicle was taken to Cork University Hospital with serious injuries.

The road was closed for a technical examination but has since re-opened.

Gardaí in Midleton are appealing to any witnesses to come forward, in particular anyone with dash cam footage.

Warning, this is a traumatic video - it’s a video of a women, looks like in her car having a seizure or some neurological event post injection (based on her attempt to speak she get the word “vaccine” out) what appear to be her two children are in the back of the car, the boy looks terrified, while possibly the older daughter calls emergency for her mother as the mother tries to communicate while shaking and losing control over her body. 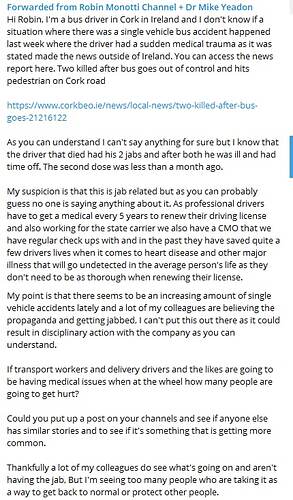 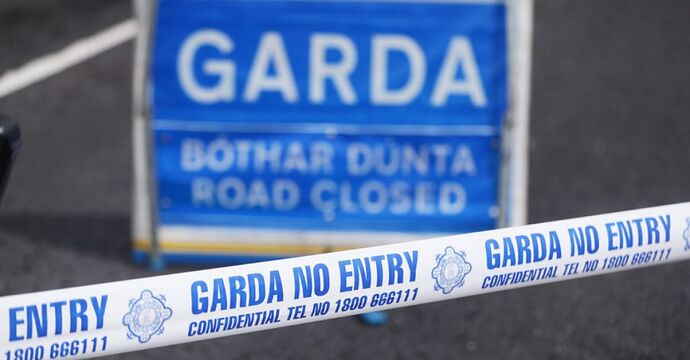 In one of the incidents a woman in her 20s was fatally injured when she fell out of a moving bus in Co Donegal and was struck by a passing vehicle. 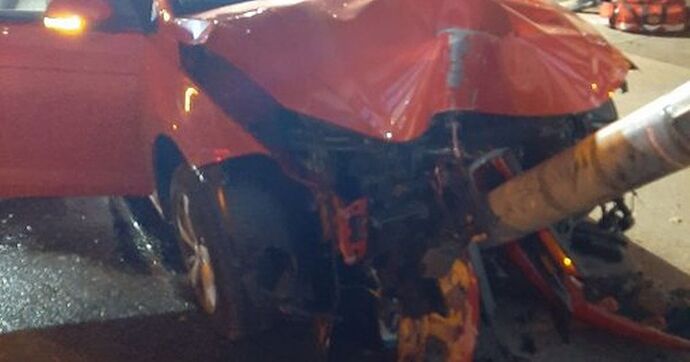 One rushed to hospital after car smashes into a lamp post in late night...

A person was rushed to hospital after a car smashed into a lamp post in a late-night collision in Dublin. Firefighters from Phibsborough were alerted to the

I think that the 2nd or 3rd lamppost crash, one saved some children in North Dublin City centre there last week I think. Might not have linked to it. So many. Everyday.