Actual research shows that sex is anything but binary

Actual research shows that humans are anything but pentadactyl. However, 99.9% of them are, which is why it’s not hexadactylophobic to sell only five-fingered gloves. However, that’s not the only reason the SciaAm article is stupid. Not only do the overwhelming majority of humans display normal sexual dimorphism, but the overwhelming majority of transgender people do not display intersex traits. So what has their dubious “sex is anything but binary” claim got to do with anything anyway? The transgender lobby itself is very clear that sex and gender are different things … except when articles like this intentionally blur the distinction in order to provide faux scientific justifications.

Efforts by the Trump administration to narrowly define gender as determined by genitals defy medical and scientific knowledge.

Trump wasn’t trying to define gender that way. What he was trying to do was define those laws that have traditionally discriminated on sex to continue to discriminate on sex without confusion by neologisms on gender. The comments on that article are broadly more sensible than the article itself. If we want to define a whole new category of discrimination based on “gender”, let’s do that without confusing the traditional association of gender with sex. As one commenter said:

Enough already. When I was in medical school, this was simple. As a practicing OBGYN, it is still simple. We are born boys and girls, XYs and XXs, with penises and vaginas. This is determined in utero by SRY genes and mullerian inhibiting factor … the rest is purely in the presentation.

Stating that anatomy is disconnected from gender is absurd, and it leads us down a rabbit hole of linguistic obfuscation and ideologic incoherence. As doctors, we work within a biological framework not an ideologic one, and we should not confuse the two.

I have to say, I’m loving this spat between J K Rowling and the Trans mob…I see Ricky Gervais has now weighed in. I don’t have enough popcorn in the house to watch this epic unfold…we certainly live in stupid times.

“Those awful biological women can never understand what it must be like for you becoming a lovely lady so late in life. They take their girly privileges for granted. Winning at female sports and having their own toilets. Well, enough is enough.”

My understanding of ‘intersex’ people is that they are defined as such by virtue of the fact that they possess both male.and female genitalia ie it is a definition based 100% on biological reality.

What would be more supportive of the point i think you are trying to make, would be to cite some research which provides some real basis for a person who possesses no physical intersex traits, choosing to identify as an intersex person because they believed themselves to have been born in the wrong (binary, non intersex) body…and presumably therafter seeking to have surgery to attach whichever biological elements are missing, whilst also retaining the pre-existing ones they were born with.

The comments to her tweet are very interesting. Most of the criticism of her boils down to “the hurt feelings standard”.

In one way it’s terrible that people think that saying, “have you any idea how much hurt you caused when you said X”, constitutes reason or logic.

In another way it shows what a manifestly safe, prosperous society we’ve made that people can afford to get offended at such trifles.

Comparing notes over Christmas drinks with people with corporate jobs, non political people are commenting about how stifling workplaces are getting, how sensitive and quick to involve HR that young people are, how exhausting it is to have to constantly self monitor and watch out for being snitched on. It’s interesting. I wonder where it leads ? The gibberish has spread from universities to the corporate world - I thought it would take longer. Will the capitalists eventually crack and say enough is enough this is costing us productivity ?

Is there any profit in keeping neurotic, disturbed, easily offended millennials employed ?

I’ve just looked at JK Rowling’s twitter and have been Googling Gregor Murray. This seems to be the person in question: 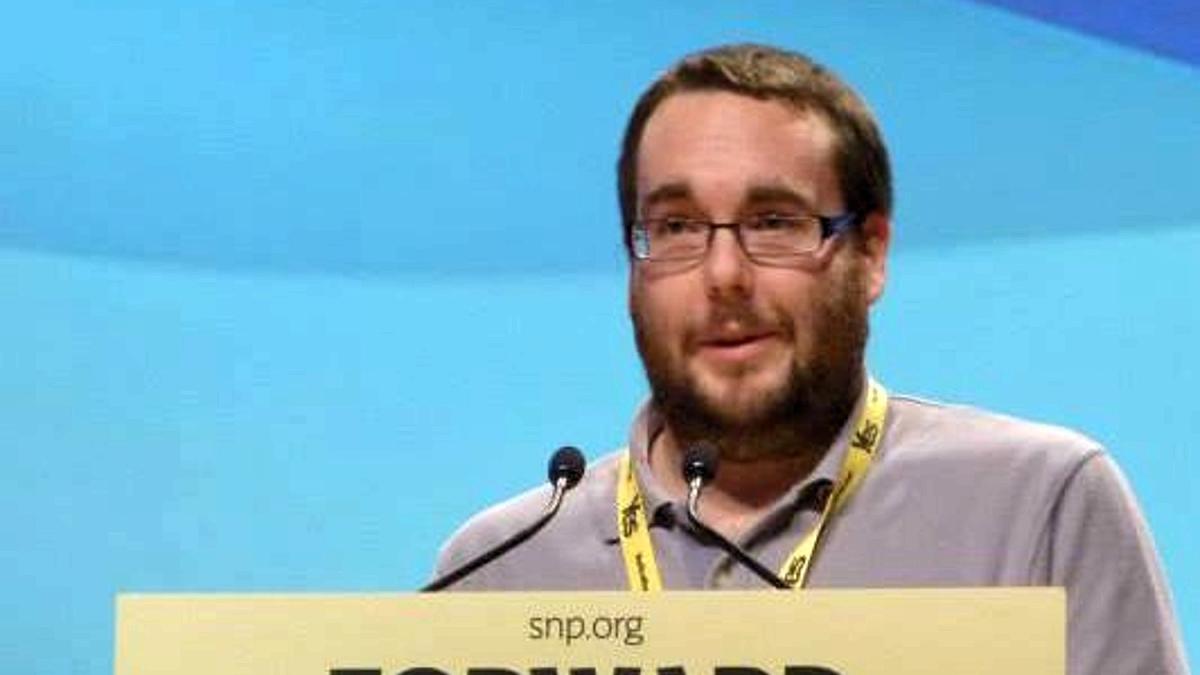 That’s from the first hit I came across, which is a newspaper describing him as a trans councillor. It’s a sign of how bizarre this whole thing is that I don’t know if he’s supposed to a trans man or a trans women. I’d have expected the former, on the assumption that he has transitioned. But then, all that hair and the male pattern baldness looks a bit too convincing unless he’s been taking a hell of a lot of hormones. So I guess he’s a man who thinks he’s a woman but hasn’t shaved lately? Is someone really and truly arguing he should be using the women’s bathroom in that state?

N.B. On further checking I see that he is “non-binary”. He is offended by the use of male or female pronouns. Does that mean he believes himself to be neither a man nor a woman? Which bathroom does he want to use? I simply can’t get my head around it.

As for the woman who was fired for “misgendering” him … I can’t help thinking how recently it is that the term would have been a source of total bewilderment, and now it’s a hate crime that can spell the end of a career.

Having googled him, his defining characteristic is bully.

In fact, he’s such a patent male bully, it’s a joke he considers himself “non binary”

Ok here’s a first for me. I was served at a till today in a major store by a young gay man with stubble…and long lilac fake fingernails…talons

There was always a thing with girls doing their tan on a Thursday night for the weekend. Men are now doing their nails. Well holy God !

Ok here’s a first for me. I was served at a till today in a major store by a young gay man with stubble…and long lilac fake fingernails…talons

There was always a thing with girls doing their tan on a Thursday night for the weekend. Men are now doing their nails. Well holy God !

If you were witness to Dublin bus broad side advertising in the early 90’s, you might remember a huge depiction of a rather masculine chin with dark coarse designer stubble, cut off approximately around the nose so that it was impossible not to see the male lips sporting a strong deep purple lipstick, PURPLE!

Yep still clear as day, a lipstick brand for men in the 90’s and I didn’t think Goths were a big enough market to justify this kind of marketing spend tbh.

I did a search and the closest thing I could find was this “Ichiban” brand but maybe this is a bit later on in the timeline when considering their prize US actor endorsing the product.

Maybe this explains why they frame dit around and below the western markets!

How big was your bill?
Was the service prompt and efficient?
Personally, I don’t care whether my groceries are billed by man, woman or machine.

"Ok here’s a first for me. I was served at a till today in a major store by a young gay man with stubble…and long lilac fake fingernails…talons

There was always a thing with girls doing their tan on a Thursday night for the weekend. Men are now doing their nails. Well holy God !"

Come to think of it, how do you know he was gay? Did he try to chat you up (assuming you’re male)? Maybe he just liked fake nails.

Maybe you’re autistic and aren’t perceptive of social cues ? Life must be hard.

Gay male speech, particularly within North American English, has been the focus of numerous modern stereotypes, as well as sociolinguistic studies. Scientific research has uncovered phonetically significant features produced by many gay men and demonstrated that listeners accurately guess speakers' sexual orientation at rates greater than chance. One feature of the speech is sometimes known as the "gay lisp", though researchers acknowledge that it is not technically a lisp. Research does not s Li...

Maybe I am and maybe you’re jumping to conclusions.
I’ve had people assume I’m gay often enough, not that I care. Perhaps I’m a bit camp without realising it. I’ve learned not to worry about other people’s assumptions.

Social clues are often difficult to interpret and life is always hard. Still, it can be made a bit easier by just relaxing a bit and not getting worked up about trivial things.

Another Trans thought struck me. On a regular basis in Saturdays Telegraph a man called David Thomas has been diarising his “transition” My Transgender Diary: 'Female friendship saved me when I was at my lowest ebb'

Author David Thomas still lives as a man, but has begun the male-to-female gender transition that will eventually result in becoming a woman.

He is actually morphing into something

But out driving today looking at election posters some late middle aged women election candidates kinda look like they could be trans. They resemble him a bit. In a Mrs Doubtfire sort of way. The ironic thing is that what I’ve just written cannot be considered an insult any more. It’s more like a compliment to him

Author David Thomas still lives as a man, but has begun the male-to-female gender transition that will eventually result in becoming a woman> Blockquote

“eventually result in becoming a woman”
TBH I hadn’t even spotted that !

The Telegraph is funny these days. It can’t stay as an island of conservatism in such a degenerate country. There seems to be no sense of personal sexual morality left in England. It’s gone now with the CoE decline. All that’s left is Therapeutic Deism.

The telegraph now attacks people being truthful. When the truth isn’t feminist approved “To be honest … I don’t really watch a lot of women’s football.

Why I Resigned from Tavistock: Trans-Identified Children Need Therapy, Not Just...

Over the past five years, there has been a 400 percent rise in referrals to the Tavistock Centre in north London, the only National Health Service (NHS) clinic in Britain that treats children with gender-identity developmental issues. During this...

It doesn’t matter what I believe, it is what my industry are already codifying.

We are already codifying this in medical terminologies and ontologies.

Actual research shows that humans are anything but pentadactyl. However, 99.9% of them are, which is why it’s not hexadactylophobic to sell only five-fingered gloves

As I pointed out in another thread, we don’t order our societies on the basis of the distal parts of a limb.

A much better example would be Albinism. And the discrimination that comes with that in many human societies.

It doesn’t matter what I believe, it is what my industry are already codifying.

We are already codifying this in medical terminologies and ontologies.

Industry, nice, a term and concept many can dig.

Any idea what’s the average worth a confused soul picked and processed via these codified variants through the production lines of The Industry might come in at?

We call them patients.
These terminoligies are critical to delivery of medical services and population health.
Is the word industry worrying you? Call it a profession then.