Turkey is it about to erupt

Has the Government blinked ???sign of weakness or confident they can re group and crush their opponents ?? 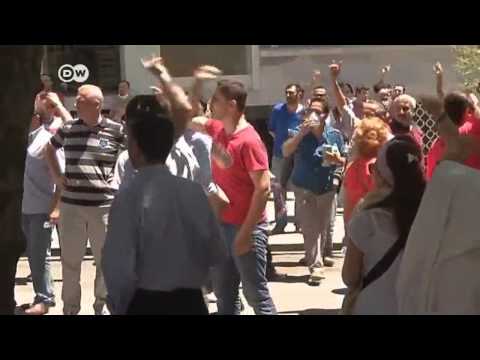 What is happening in Istanbul? defnesumanblogs.com/

What is happening in Istanbul? defnesumanblogs.com/

Thanks for posting. The ongoing abuse of basic human rights is truly appalling.

Turkish friend says that many people have been killed but I do not see any reports of deaths on the news?

I’d be really surprised if the Turkish authorities let this get out of control.

Media reporting on this is woeful.
I’m staggered that this is isn’t headline news even in UK.

Twitter (Erdogan blames social media) is the place to be…especially if proactive in the demo!

Some of the twitter tags being used: #direngeziparki , #occupygezi , #occupytaksim

However Mr Karasulas says there have also been deaths, but that the government is keeping them quiet.

“I know from the hospital that there have been deaths, mostly due to breathing issues like gas combined with asthma,” he said.

Amnesty International said there had been two deaths

These are the only reports I can find. Allegedly there is a video online of police driving through crowds. No idea if legit or propaganda and I`m not about to go looking for such a video!

Looks like the best thing to do would be to call an election no? 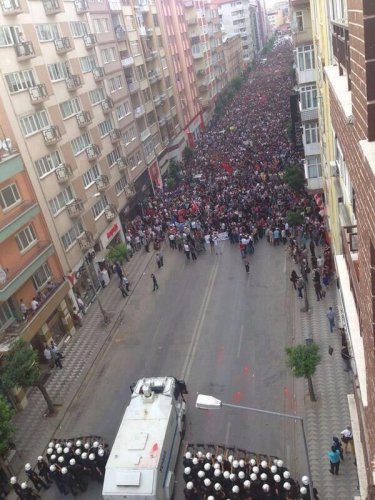 Meanwhile local government of Istanbul shut down all the ways leading up to Taksim square where the Gezi Park is located. The metro was shut down, ferries were cancelled, roads were blocked.

Yet more and more people made their way up to the center of the city by walking.

The right to live as honorable citizens of this country.

They gathered and marched. Police chased them with pepper spray and tear gas and drove their tanks over people who offered the police food in return.

Getting quite a bit of coverage Stateside. Reports that it has spread to 80 cities etc. However I can’t remember what news channel I saw it on as I was flicking channels before work (may have been Fox in which case the usual caveats apply). 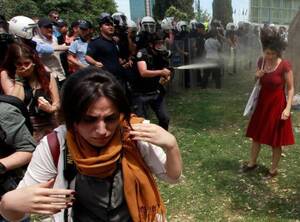 reminds me of something

A lot of the protestors are young - even secondary school level. They seem to be mightily pissed off with Erdogan’s paternalist-authoritarianism.
He’s left the country and is visiting North Africa, afaik.

Are we past the days when the army is the guardian of Turkish secularism?

Yes
Their all into democracy these days. Islamic democracy. From what I have heard all the college bars were shut down this year. It’s about the only thing that would cause a riot.

Always a bad sign when they want to change he constitution to get extra terms, a real marker of authoritarianism.

I expect that some of the ire directed at the government is to do with Turkey’s shameful role in the Syrian conflict. Something like 70% of Syrians support Assad at this stage, a point hardly lost on their Turkish neighbors.

Meanwhile, the ultras are putting their shoulder to the wheel.

Taking inspiration from the “Arab Spring” label, Western colleagues were quick to name “the Gezi Park uprising” that broke out in Istanbul and instantly spread across Turkey as a “Turkish Spring.” According to Le Monde, “the people were awakening against Erdogan’s authoritarian regime.” It was Istanbul’s white night. The Guardian said the protests were sowing “the seeds of a Turkish spring.” In Russia, Izvestiya said “the Turkish Spring has started in Istanbul,” while Kommersant, also recalling the Arab Spring, highlighted one difference: “While secular regimes were the target of uprisings in Egypt and Tunisia, Turkey’s protesters are demanding the resignation of the Islamist Erdogan.” Germany’s Der Tagesspiegel also opted for the “Turkish spring” label.

The Turkish media hardly heeded the “Turkish spring” description. Let’s set it straight: There is no way to compare Turkey to the Arab regimes that got rid of their dictators. In Turkey, “the people settle scores at the ballot box” is the deep-established political motto that stands in the way of popular rebellion as a means of voicing grievances. The problem in the country stems from the fact that an elected leader, emboldened by the rosy outlook of the economy and the popular support he enjoys, has grown increasingly authoritarian, reducing democracy to a majoritarian rule and imposing his ambitions on others with a mentality that he could do whatever he likes. In the words of Professor Ahmet Insel, Prime Minister Recep Tayyip Erdogan fanned this “uprising of dignity” by calling the protesters “hoodlums.” The revolt certainly has common features with the uprisings in Egypt and Tunisia — especially that apolitical youths with no organizational affiliations took to the streets for the first time to confront the police.

From apolitical fanaticism to pivot of revolt

Other common aspects could be mentioned, but the most striking one is that football fans — the ultras — were at the forefront as a pivotal force. We witnessed the same in Egypt in 2011. The arrival of Al Ahli and Zamalek to the scene swayed the course of the uprising against Hosni Mubarak. When Mubarak’s camel-riding axmen stormed Tahrir Square on Feb. 2, 2011, it was the Ultras Ahlawy who shielded the protesters. Experienced in confronting the police, they galvanized the revolt. The more nationalist and statist Al-Masry club sided with Mubarak, while Al Ahli displayed an oppositional profile. Ultras White Knight, the Zamalek ultras, also took to Tahrir against “the last pharaoh,” alongside Ultras Ahlawy. That Zamalek was the club of the elites and the army could not stop the eruption of the “socialist” core lying deep down in the ultras.

The surprise outburst of Turkey’s football fanatics during the Gezi Park revolt caught everybody off-guard. The fans of archrivals Galatasaray, Fenerbahce and Besiktas came under the spotlight not only for shielding inexperienced protesters but also for the alliances they formed against the police violence. The fans of one club clashed with the police for the fans of another. According to Radikal journalist Hakki Ozdal, solidarity between football clubs in street unrest is not unprecedented. “The solidarity between Fenerbahce and Galatasaray fans goes back to May Day demonstrations in 2007 and 2008, when they jointly confronted police near Taksim Square. They now find it strange that this is regarded as something new. Clashing with police after almost every match, those groups have mastered defense tactics. They have become skilled against the police’s pepper-gas grenades and riot control vehicles, the TOMAs. That’s how they emerged at the forefront of the latest clashes,” Ozdal told Al-Monitor.

I expect that some of the ire directed at the government is to do with Turkey’s shameful role in the Syrian conflict. Something like 70% of Syrians support Assad at this stage, a point hardly lost on their Turkish neighbors.

where do you get this 70% number from