I’m sure you can dig up a quote of him defending Marxism - but I do think calling him a “Marxist” just repeating a Tory slur. If he’s a Marxist then what was Atlee or Wilson ? Are his policies so different. I’m not an expert.

It’s interesting to see he says he’s listening, but he still gets a dig in about “diversity”

[quote]There is no quick fix to overcome the distrust of many voters. Patronising them will not win them over. Labour has to earn their trust. That means the patient work of listening and standing with communities, especially as the government steps up its assault. And it means ensuring that the working class, in all its diversity, is the driving force within our party.

The media attacks on the Labour party for the last four and a half years were more ferocious than ever – and of course that has an impact on the outcome of elections. Anyone who stands up for real change will be met by the full force of media opposition.[\quote]

Maybe insight is the wrong term, but there’s no denying the imbecilic group think that pervades right across Irish public life. The names mentioned at least weren’t afraid to voice opinions that are considered unpopular, but in reality, based on the past number of years, are clearly held by a significant minority, if not a majority. I strongly disliked Myers for example but he’s head and shoulders above anything out there currently.

By way of example, a leading Irish talking head and political reporter was front centre at an anti free speech rally outside the Dail yesterday. Hard to credit but sign of the times.

The clue was in the phrase ‘get brexit done’

Ie respect the democratic vote that was decided three years ago.

Labour and the left generally are now faced with a stark decision (relevant to SF in Ireland also).

It seems it’s one or the other as it can’t be both.

I’m sure you can dig up a quote of him defending Marxism - but I do think calling him a “Marxist” just repeating a Tory slur.

I said Corbyn was a roaring red socialist. The Marxist comment was about John McDonnell. I said he was a self-confessed Marxist and so he is:

Corbyn has also drafted in Marxists and decades long members of the British Communist Party as advisers. He has praised totalitarian leftist leaders in other countries. His soft spot for terrorism extends to more than the IRA. He has a habit of denigrating the West to justify the actions of Al Qaida and others.

Anyway, this is all water under the bridge. He and McDonnell will shortly be gone. The question for Labour – and I believe it’s an existential one – is whether they double down on more of the same. Given they have purged the party of many of its high ranking centrists, I’d say there’s a pretty good chance.

Consider that their analysis of the 2015 and 2017 elections was that they hadn’t been leftwing enough. And you still have Corbyn and McDonnell preaching to the converted that the message in 2019 was the right one but they didn’t deliver the narrative in the right way. If Labour continue down the same path they will not win an election this side of the 2030s.

Labour decided to go down this path in 2010 when they elected “Red Ed” over his brother David, on the very narrowest of margins.
They seem to be doubling down by setting up Rebecca Long-Bailey for the leadership.
On the other side of the coin, without a viable Opposition for the next 10 years (at least), the Tories will really own Brexit and all policies that flow from it. So its going to be a defining period for the UK.

The clue was in the phrase ‘get brexit done’

Ie respect the democratic vote that was decided three years ago.

That’s an important point. The British don’t hold many referenda and many on both sides got upset when a result isn’t upheld.

But there is another huge area becoming increasingly important in British politics, and that is more important to Labour than how socialist it is seen to be, and that is patriotism/nationalism.

I have seen numerous interviews with traditional Labour voters particularly in Northern English constituencies and the actual reason they didn’t and won’t vote for Corbyn is his perceived lack of English patriotism. Many of these folk have links with people who are serving or who served in the British armed forces and they simply don’t trust Corbyn. This feeling about Corbyn has grown over little things like the fact that he won’t say that England is great country, he has been seen not to sing God Save The Queen and of course there are his past flirtations with Sinn Fein/IRA & PLO, Hamas.

This is just a gut feel among this section of the electorate but it mirrors the ongoing rise of English nationalism and if the next Labour leader is London-centric and is not prepared to say that he is proud to be English then Labour won’t be winning the next election either.

Denis Skinners seat went Tory. Pretty incredible really but the idea that Skinnner’s former constituents have a problem with socialism or lefties generally is pretty daft.

What they do have a problem with is the woke metropolitanism masquerading as being ‘of the left’ but what is really little more than poorly disguised disdain for traditional working class people and culture.

Jibes about woke are all very well but let’s be straight here. Many towns outside London e.g. Portsmouth are actually filled with horrible bigots. A lot of the English working class are Monkey hangers. These are the types who filled their armed forces. And we’ve seen worldwide the consequences. 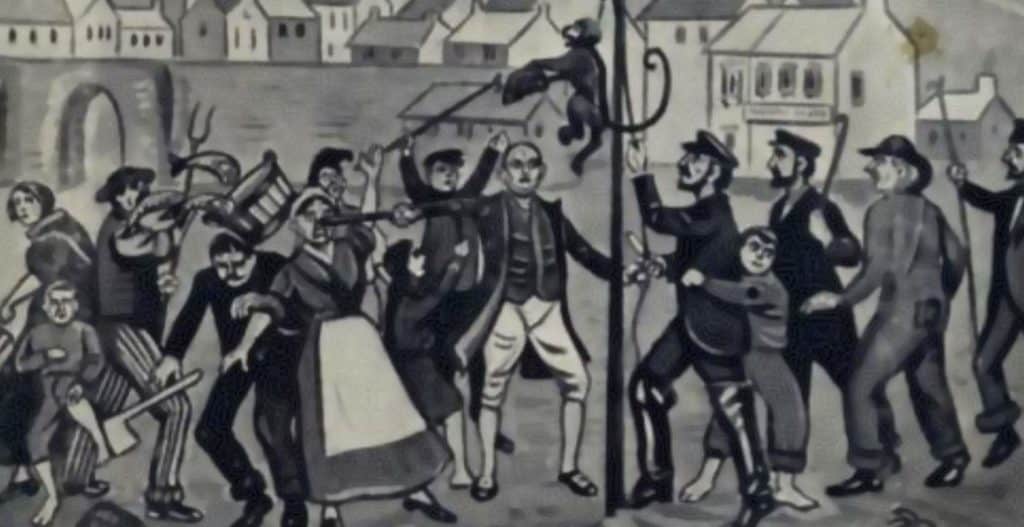 The Hanging of the Hartlepool Monkey

During the Napoleonic Wars legend has it that the people of Hartlepool hanged a shipwrecked monkey as a French spy...

It’s like saying Northern reps should be “proud” of Loyalist thugs.

If you’re a monkey hanger, well migrants or not, you actually do need to change.

Preferred terminology notwithstanding, the left is clearly haemmorraging its traditional vote across much of the western world.

Where once the left was collectivist in outlook it is now the champion of extreme individualism across the board such that collectivist concepts and ideals are actually deemed exclusionary or indeed any nunber of ‘ists’ or ‘isms’.

On the flip side, the brand of nationalism espoused by Johnsons ‘one nation’ Tories sounds a lot like a collectivist vision once offered by the likes of Harold Wilson, assuming he makes good on his promises.

Interesting times and all that.

“Monkey hangers”? Ha!, that sounds like some quality vintage fakes news there.

Hartlepool FC’s mascot is named Hangus after the aforementioned event.

Jibes about woke are all very well but let’s be straight here. Many towns outside London e.g. Portsmouth are actually filled with horrible bigots. A lot of the English working class are Monkey hangers. These are the types who filled their armed forces. And we’ve seen worldwide the consequences.

It’s like saying Northern reps should be “proud” of Loyalist thugs.

If you’re a monkey hanger, well migrants or not, you actually do need to change.

Substitute the word Irish for English in your post and you would be complaining about a racist post.

It’s hypocritical to support the concept of Irish nationalism and at the same time complain about English nationalism/pride in their country.

Yes, but like the Germans and WWII, there comes a time when the current generation tires of having to beat its breast at every moment for the sins of the forefathers. England has plenty of cultural history to be proud of outside of colonialism, but it’s sometimes frowned upon. I’ve also noticed a version of this when investigating the plethora of notable Irish scientists of the past several hundred years. They’ve been mostly airbrushed out of Irish history for being too “Anglo”.

They airbrushed themselves, Wellington’s comment about being born in a barn comes to mind. If someone didn’t identify as of Irish nationality why rebaptize them Mormon style when they’re dead ?

The key tension between good men like Corbyn bad men and women in Britain is that Corbyn has actually looked at Britain’s past coldly, and brings this to bear whenever Britain meddles abroad. His opponents have done no “breast beating” whatsoever.

The standard British response to objections about their conduct amounts to: ‘well I’m a nice guy…so my forefathers were nice guys…they might have got things wrong…but they always acted with the best intentions’

Sorry, but that’s not breast beating. That’s an apologist. Ironically, what they accuse Corbyn of being.

Definitely Screwy, but not quite as Bonkers as his puppet master Cummings.

And with that final, awful image of Screwings, Bonkings and Cummings, I think it’s definitely time to bring out the shackles and lock the thread.

… including saving Europe from dictatorship twice.