Definitely Screwy, but not quite as Bonkers as his puppet master Cummings.

And with that final, awful image of Screwings, Bonkings and Cummings, I think it’s definitely time to bring out the shackles and lock the thread.

Maybe once but certainly not twice. Fight enough wars and you will be on the right side at least once.

Maybe once but certainly not twice.

Which of Napoleon and Hitler are you exonerating?

Was Napoleon any worse that the British Empire in the 19th century?? One empire against another battling out for supremacy. Both were fairly hot on slavery with additional famines kindly bestowed on the British colonies due to indifference . Glad they ‘saved’ us from all that .

The slave trade was banned by Britain ten years before Waterloo. And it wasn’t one empire against another – the Brits were allied with the Germans, Russians, and Dutch.

And some would say that Brexit is but the latest British stand against the Napoleonic tendencies of some of our continental cousins.

Id note your definition of slave trade, slavery didn’t stop the enslavement of millions until the 1830s/1840s when the British undertook one of the largest bail outs in history - to slave owners.

The Slavery Abolition Act 1833 (3 & 4 Will. IV c. 73) abolished slavery throughout the British Empire. This Act of the Parliament of the United Kingdom expanded the jurisdiction of the Slave Trade Act 1807 which made the purchase or ownership of slaves illegal within the British Empire, with the exception of "the Territories in the Possession of the East India Company", Ceylon (now Sri Lanka), and Saint Helena. The Act was repealed in 1997 as a part of wider rationalisation of English statute l...

In their own words: why voters abandoned Labour | YouGov

There’s been a lot of soul searching within the Labour Party since last week’s election. Why did they face their fourth consecutive defeat at the ballot box, and fall to their lowest number of seats since 1935?

That poll says that the biggest reason that people abandoned Labour is that they disliked Corbyn… but offers no reason as to why that may have been the case.

Further, the notion that people who voted all their lives for Denis Skinner or supported Arthur Scargill, chose in 2019 to vote Tory because Jeremy Corbyn was too much of a leftie, is preposterous.

The greater likelihood is that people disliked the manner in which an urban cosmopolitan minority sought to undermine the democratic outcome of the Brexit vote.

Further, Corbyn and his followers’ wholesale adoption of ‘wokeness’ to include said dogma’s quite open hatred of the working class across western societies is likely what caused him to be so disliked by many who would otherwise share his politics when applied to economic matters.

As per this article the left really does need to decide what it stands for before it becomes permanently obsolete.

The left needs to drop the woke nonsense

2019 showed us yet again that wokeness loses elections.

YouGov is a British international Internet-based market research and data analytics firm, headquartered in the UK, with operations in Europe, North America, the Middle East and Asia-Pacific. YouGov was founded in the UK in May 2000 by Stephan Shakespeare and future MP Nadhim Zahawi, at the time both active in the British Conservative Party. In 2001 they engaged BBC political analyst Peter Kellner, who became chairman, and then from 2007–2016, President. In April 2005, YouGov became a public com... 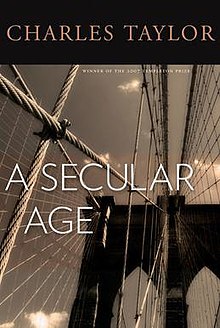 A Secular Age is a book written by the philosopher Charles Taylor which was published in 2007 by Harvard University Press on the basis of Taylor's earlier Gifford Lectures (Edinburgh 1998–1999). The noted sociologist Robert Bellah has referred to A Secular Age as "one of the most important books to be written in my lifetime." In recent years, secularism has become an important topic in the humanities and social sciences. Although there continue to be important disagreements among scholars, many ...

He cites what the Catholic Church did in France. It grew a bit but ensured its collapse with men because it associated itself with a feminine sort of po-faced piety:

Nowadays the Left has the same sort of po-faced feminised piety. And it isolates normal men. The only men attracted to it are low testerone men, or men getting involved in feminist causes as an unconscious dating tactic to get close to women.

The recent Two Popes movie on Netflix ties in somewhat with this take as it seems to ultimately suggest that the Catholic Church has morphed from being a conservative organisation a la the likes of Bemedict, into a full on SJW outfit under the current guy. The last few minutes of the movie appears to suggest that the Catholic Church’s primary function is now to promote the dismantling of borders the world over.

Trocaire even turned up at a recent anti free speech protest outside the Dail, standing on the picket alongside the likes of WSM, Anti Fa, Saoradh, Ogra Sinn Fein and the sex workers alliance, basically a whos who of the local globalist loons. Little did we know that our Trocaire boxes would be funding the ground work being laid for the introduction of a latter day Section 31. That SF and others are also there really beggars belief.

Is there anyone left out there who might be capable of representing the interests the working man …or are we going to have to suffer our own version of UKIP type madness in due course?

Moralistic therapeutic deism (MTD) is a term that was first introduced in the book Soul Searching: The Religious and Spiritual Lives of American Teenagers (2005) by sociologists Christian Smith and Melinda Lundquist Denton. The term is used to describe what they consider to be the common beliefs among American youth. The book is the result of the research project the "National Study of Youth and Religion". The author's study found that many young people believe in several moral statutes not exc...

Of course, the crucifixion can’t be read out of the story at this late stage; but it has to be an accident de parcours; not the main point. This fits well within the the whole shift within the anthropocentric climate in the significance given to the life of Christ: what is important is not what he does (atone, conquer death, take captivity captive), but rather what he says or teaches…

Christianity is inconceivable without sacrifice, without the possibility of some positive meaning to suffering. The Crucifixion cannot be sidelined as merely a regrettable by-product of a valuable career in teaching

normal male behaviour becomes criminalised, or at a minimum can cost your job.

When did it become illegal to build model railways and grow giant vegetables?

However, compared to American Christianity he has the problem that the Catholic Church has been very good at writing down what it believes for the last two thousand years, and in its self-definition it measures its own authenticity by reference to those documents. That’s a considerable bind for revisionists.

The man in the pew (or, increasingly, the man not in the pew who feels it is still his god-given right to dictate what the church ought to teach), and even the scandal-ridden hierarchy, may increasingly not know or care what is in the defining documents. They might actually be so uneducated as to agree with the Irish Times religious affairs correspondent who felt able to write that:

Irish Catholics remain faithful, generous and compassionate, despite all. It is because of such compassion they voted so overwhelmingly for same-sex marriage in 2015 and to remove the Eighth Amendment last May.

The problem is there’ll always be someone who knows where to look to authoritatively dispute such nonsense. Even if you burned down every theology library that had dusty copies of Roberts and Schaff’s thirty-eight volumes of the church fathers, even if nobody could afford the €5,000 price tag for a new printed set, the whole thing is available free online. Deriving from Scripture and from these authoritative writings come innumerable other church writings and two definitive catechisms, also available online (including the Latin editio typica which has been efficient in stopping translators into other languages dicking around with the content). The church’s own definition of divine revelation rules out that it is merely “what the pope and/or bishops say on any given day”. No matter if 99% of nominal Catholics prefer the therapeutic deism horsepucky, they’re ultimately kinda stuck in this bind (whether they know it or not).

Well “faithful, generous and compassionate” sums up the Global MTD faith’s self perception.

But A church that’s completely at odds with its members is in deep trouble.

You saw in the Abortion and Marriage referenda - young people believed there actually was nothing to discuss or consider. It was a self evident decision for them.

The church fathers are like the slave owning people who set up the USA. They’re wrong on today’s hot topics - marriage, reproductive rights, and the next step euthanasia. So they have much reduced influence.

A church that’s completely at odds with its members is in deep trouble.

Ah, but is it? On the important issues you have the example of the annual Christmas concert direct from the Vatican. At 01:44:25 the people, priests and bishops fold their hands over their hearts and are led in a heart-warming prayer to the mother Earth. Roughly translated it says the mother earth, Hicha Gueia, is everything. She gives us food, sacred water, and drugs. We pay homage to her, and present her with the placenta, and the first cuttings of the hair. (For some reason the lady translating from Spanish to Italian leaves out the placenta bit

Who needs Church Fathers when you’ve got the Earth Mother?

… and who needs Christmas carols when you’ve got Leonard Cohen’s Hallelujah on the pan pipes.

Ah here, let’s get the terminology right. It has to be either Resting Smirk Face or Smirky Resting Face to match the convention.

I’ve also noticed that she has Walking Grin Face whenever she’s on walkabout with Bojo. Sometimes she seems a bit besotted. I agree about the psychopathy. But then, they’re two-a-penny in the victorious wing of the Tory party. Michael Gove, anybody? 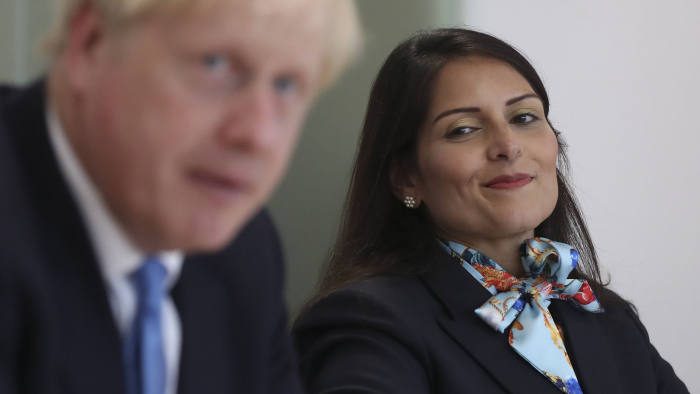 Sounds like the Resting Smirk Face disappears “priti quick” when she deals with subordinates. Yet more allegations of workplace bullying emerging tonight. So far we’ve got permanent secretary of the Home Office, Sir Philip Rutnam, taking her to the employment tribunal. We’ve got an aide working for the Department of Work and Pensions who was allegedly driven to attempt suicide. And now there is a new case from her time as Secretary of State for International Development. Apparently Patel was fond of telling staff they were “fucking useless”. BBC Newsnight tonight cites a source who said she needs to avoid the employment tribunal as it will involve legal disclosures where it’s claimed there’ll be numerous additional complainants queuing up to spill the beans.

It’s fascinating to read today’s coverage of Cummings’ demise in today’s Telegraph and look at Newsnight recently. Reading between the lines it seems to be a sort of feminist counter insurgency.

Cummings etc were like star Investment Bankers who (from the female perspective) get to shout down & humiliate female subordinates or (from the male perspective) get things done without paying attention to emotions. Now that’s getting swept away. Cummings sees himself as a Counter Insurgent but he just got completely outmanoeuvred.

I mean, how well can you claim to know Boris and not know that he thinks with his dick ? They were briefing against his baby mama Carrie.