When does (serious) inflation kick in?

Even though money is now being pumped into the banks will that trickle down to companies and consumers?

Taipeir, what you say is correct. But, what about this?:

The nuclear option, conceived in America but untried in Japan, is to finance public spending or tax cuts by printing money. This requires the central bank to go along with the fiscal authorities (which may prove easier in America than in Europe). It could work like this: the government announces a tax rebate and issues bonds to finance it. But instead of selling them to private investors, it lodges them with the central bank in exchange for a deposit. It draws on this account to clear the cheques mailed to taxpayers. This scheme is essentially the same as the proverbial “helicopter drop” of money, but with neater accounting and a less erratic distribution of cash. It bypasses banks and money markets, and puts money directly into people’s pockets.

From what I’ve been reading of late, this appears to be the next step to be taken by the FED. Also, I’ve started seeing articles on governments potentially giving mortgage holders a moratorium on full payment on mortgages for a period of time. These measures would surely be inflationary.

Don’t sweat it. Leo encouraged employers to give employees a pay rise.

Don’t sweat it. Leo encouraged employers to give employees a pay rise .

Perhaps we can finally have free cake Friday for everyone.

Missus just had a FAB* moment when the electric bill arrived!

25% higher than the same one last year.

I do a big shop in dunnes every 2 weeks, lot of incremental price increases particularly in the butchers. food producers have become very sneaky with shrinkflation, the box/packet you bought last year was slightly bigger but the price remains the same, average punter doesn’t see this unless you’re paying attention.

Deja Vu to you and yours! Saving you Money since 2008 The Scrimp and Scrape thread: tips to save money

City economists expect increase from 0.25% to 0.5% on Thursday amid cost of living crisis

ECB not moving will surely mean some very “pissed off” Germans, Dutch, Austrians…

Steffan Ball, the chief UK economist at Goldman Sachs, said the MPC would probably vote 9-0 to raise borrowing costs on Thursday, and could lift interest rates to as high as 1.25% by November this year.

Yes the Pound has most definitely increased in value relative to the Euro, not sure about the US dollar though. The Pound is still suffering from post Brexit syndrome.

In theory the mechanism of the market would mean that the weak Euro (and weak willed monetary policy dictated by political concerns and MMT lunacy) vs the dollar and GBP would lead to imported inflation in the Eurozone, on top of the increases in oil price hitting everyone globally, with oil now up at 87 bucks.

After a huge year for growth, the U.S. economy is about to slam into a wall

The U.S. economy last year grew at its fastest pace since 1984. Don't expect a repeat performance in 2022.

Spurred by a massive inventory rebuild and a consumers flush with cash, the U.S. economy last year grew at its fastest pace since 1984.

Don’t expect a repeat performance in 2022.

In fact, the year is starting with little growth signs at all as the late-year spread of omicron coupled with the ebbing tailwind of fiscal stimulus has economists across Wall Street knocking down their forecasts for gross domestic product.

Combine that with a Federal Reserve that has pivoted from the easiest policy in its history to hawkish inflation-fighters, and the picture has sudden changed substantially. The Atlanta Fed’s GDPNow gauge is currently tracking a first-quarter GDP gain of just 0.1%.

6 rate hikes this year would be a hand grenade into the bond market and a fucking cruise missile into the stockmarket.

JPow is gonna try let this run as hot as he can for a long as he can, no sudden moves, no surprises.

The ECB have already said no plans for rate hikes. Inflation is here to stay.

The chief economist of the European Central Bank, Philip Lane, has said he believes inflation will come down later this year and that the current high rate is part of what he calls a "pandemic cycle of inflation."

Central banks are 'sleeping at the driving wheel' as inflation spirals, says...

Well if anyone knew about inflation, it’s the South Americans

The Bank of England (BoE) raised interest rates to 0.5 per cent on Thursday and nearly half of its policymakers wanted a bigger increase to contain rampant price pressures, as the central bank warned inflation will soon top 7 per cent.

In a surprise split decision, four of the nine members of the Monetary Policy Committee (MPC) wanted to raise interest rates by half a percentage point to 0.75 per cent. This would have been the biggest increase in borrowing costs since the BoE became operationally independent 25 years ago.

Stimulus will continue to be curbed over coming months

The European Central Bank kept policy unchanged as expected on Thursday, curbing stimulus over the coming months but maintaining plenty of support for the economy even after inflation unexpectedly hit a fresh record high.

After the ECB extended support measures only in December, policy change was not expected to be on the agenda. But stubbornly high inflation – which rose to 5.1 per cent last month in the 19-country euro zone – is complicating life for the bank and ECB president Christine Lagarde will be under pressure to address the issue in her lunchtime news conference. 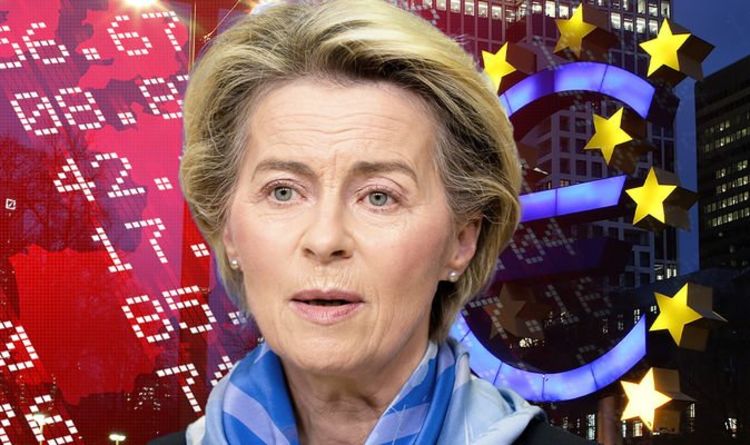 EU frozen by own policy: Spain, Italy, Portugal and Greece could be 'forced out...

THE EU appears to be frozen by its own monetary policy, leaving Spain, Italy, Portugal and Greece at risk of being "forced out of the Euro".

The Express, so sensationalist and Brexit, but…