Any thoughts on this? I would have thought it is a small site - what say the pinsters - 350k?

well for a start you need to look at the An Bord Pleanala conditions which omit the artists studio and au pair accommodation and require you to keep and refurbish the existing garage. None of which is mentioned in the Savills ad. The original planing permission in 2006 was extended to 2018.

The existing permission is a pretty poor design. I suspect whoever buys this will start the process again. I can’t see it getting €750k, despite the great locaton and lovely views.

I would love to have a go, if money were no object.

well for a start you need to look at the An Bord Pleanala conditions which omit the artists studio and au pair accommodation and require you to keep and refurbish the existing garage. None of which is mentioned in the Savills ad. The original planing permission in 2006 was extended to 2018.

The existing permission is a pretty poor design. I suspect whoever buys this will start the process again. I can’t see it getting €750k, despite the great locaton and lovely views.

I would love to have a go, if money were no object.

Great address and site, but good luck getting planning on Vico Road. If you buy that, you have to assume that you’ll be stuck with it as-is and that’s a lot of money for something very small with possibly no potential to extend.

There’s something deeply satisfying about having a hill behind you and water in front. Feng Shui or something.

Great address and site, but good luck getting planning on Vico Road.

The wife works in the council.

Saw this site. Not only does it seem way overpriced at over 2m per acre this far out, but your views seem to be materially blocked by the jungle / forest your neighbour in front has?

I know a guy who had a bid on this 18 months ago at €500k. Withdrew because it turns out the ‘sewage’ connection in the planning permission isn’t viable and the neighbour won’t allow access through his pipe. Septic tank would be difficult on that site.

Implies 1.8m an acre valuation for a well located Killiney site but with restricted sea view (limited to upper floor and still mostly blocked by Thorncroft’s dense trees in front). No south view as blocked by neighboring houses in the row, and the hill behind blocks most western / evening light (classic Killiney / Dalkey set up in fairness). Check it out on Apple iMaps 3D. 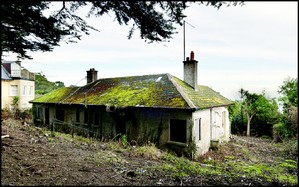 There are view opportunities south of Killiney Hill Road (the most valuable part, with the sea views), to build new modern houses. Killiney planners are really hardcore with period houses (i.e. no removal of period back wall for blowout kitchen etc.). Even with existing 1970s houses, they can require - under sustainability - that proportions of the structure are kept (although Board P is more accommodating, and hence almost every planing goes to AnBP). Dromeen came with the benefit that the existing structure was completely derelict and the site would therefore have much wider planning options (no requirement to keep existing structure).

Dromeen became a key benchmark for agents in Killiney re sites / land. While it is not on Killiney Hill Road, Kilmore Avenue (or Saintbury Avenue) is a very desirable road off Killiney Hill Road (as per Marino Avenue). It was also a normal shaped regular site and none of the draw backs of a period house or material planning issues (it had the D06A/1761E planning). It was also on the market for a while so was tested (it went sale ‘un-agreed’ more than once). It went from being almost unsellable in late 2012 (at least for over 1m an acre), to being well bid by mid 2013 to almost 2m an acre. Amazing how quickly land prices rose in Dublin.

Note, Dromeen (Google Earth mistakenly labels it as “Kilbeag”, and also labels a neighbour’s site as “Drumeen”) is at the junction of Saintbury Avenue and Kilmore Avenue, just off the middle of Killiney Hill Road.

It is a beautiful place to walk on a summers evening. Like being on a country lane (although a pretty steep one in some places). Very private and secluded, particularly at the upper Saintbury Avenue part (where Dromeen lies).

Caught sight of the CGI images for the new house going up at Dromeen - looks fab.

Stephen Newell is the architect (sna.ie), and the full drawings for D15A/0379 are on DLR planning website.
I think that Newell’s “tower with vertical slot windows” is becoming his trade feature.
This is a nice effect internally, where you get bigger open vertical spaces in parts of the house that would be dark (i.e stairs).
Works really well here being set into the large straight stone-clad wall here (very subtle “castle” feel, but not in any kitsch way).

James Horan did the CGI images for Dromeen’s planning (highly recommended with AnBP and great idea, albeit not cheap).

I think this house is pretty cool. Having a big 2nd floor terrace is key to getting a fuller sea view (the drawback of Dromeen’s site are the trees in front blocking it’s seaview at ground level and even part of 1st floor). In addition, given the drawback of many Killiney Dalkey full sea view houses (i.e. hill behind blocks the west evening light), they have gone for full privacy with a long stone-clad straight wall (and even brought the garage inside, to give a really long-wall effect and expand the 2nd floor terrace). Built up over three floors.

Good call to put kitchen / living on 1st (entrance) floor (I’ll bet there were endless discussions on this). I would loose the railings at the front for the two light-wells (too office like) and replace with natural thick (for health & safety) wooden grills set in the light well but out of sight at c. 0.5m below the surface (allow some green plants to hang off these grills down into the well, and consider mirror and natural pool at base for effect internally - done well is amazing on the interior, although done badly is like a cheap spa).

Wouldn’t do so much paving in front (better to use cheaper but high quality gravel as looks more natural and in keeping with the stone front - they will have a mix of clad stone, tower stone and gravel stone, which would be cool) and re-invest in a top quality mega wide, thick natural wooden (emphasise wood of garage) large double door (lots of glass around it, for key west light), which would really affirm the “status” of the house.

Top floor master bedroom / study / terrace will be amazing with full sea views (and high enough that it would capture the evening west light too). I’m sure they would have loved to have had a bigger terrace on the entrance 1st floor, but they have extended this floor to the max eastward allowance, without starting to overlook back into their neighbors (per planning document drafts).

Compare with the recent sale of the smaller 3,000 sq ft Mount Prospect Killiney Hill Road.
(also brand new but, no view, tiny front garden, no back garden, in an estate, in poor part of Killiney Hill Road, no views) for 1.9m.
thepropertypin.com/viewtopic.php?f=10&t=64533

Shows when the land price is not “over hyped”, it leaves scope for much better quality builds (vs. size for size sake) ?

I suspect the above completed new contemporary house will be worth +2.5m (comfortably) vs. Mount Prospect 1.9m and Middle Abbeylands 2.5m, if not higher depending on final quality / aesthetic of completed result (+2.75m). This makes Dromeen’s site worth well over 1m (i.e. +3m an acre), and is consistent with other pricing seen elsewhere in the most desirable parts of Killiney since about mid 2014 (see link below), and particularly for sites without protected period structures on them.
thepropertypin.com/viewtopic.php?p=871047#p871047

Probably the best direct comparison, is late 2015 sale of Tenerife on the Glenalua Road in Killiney Village for 1.1m (or 3.5m an acre). Tenerife was on a similar sized 0.31 of an acre site - and like Dromeen, was bought as a site - but was on a much less prestigious road / weaker positioning, right up in Killiney Village, then Dromeen’s site (much more private and exclusive).
thepropertypin.com/viewtopic.php?f=10&t=66103